Cera (from Lat. tabula cerata-wax tablet — - a tablet made of hard material (boxwood, beech, bone) with a hollowed-out depression, where dark wax was poured.

They wrote on the tablet by applying signs on the wax with a sharp metal, wooden or bone stick-stylus (other-Greek στῦλος, Lat. stilus). If necessary, the inscriptions could be erased or smoothed out, and the tablet could be used repeatedly. Wax tablets served for daily records, reminded of business, debts and obligations, served as draft texts, which were then transferred to papyrus and parchment. Sealed tablets were used for making wills, transmitting secret orders of superiors, various statements, receipts and even denunciations. The oldest archaeological find of Cera dates back to the 7th century BC (Etruria). Wax tablets were used as everyday objects in Europe until almost the middle of the 19th century. 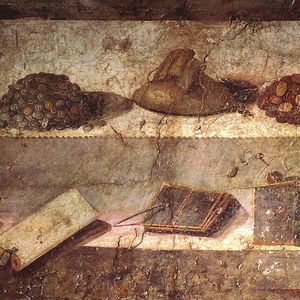 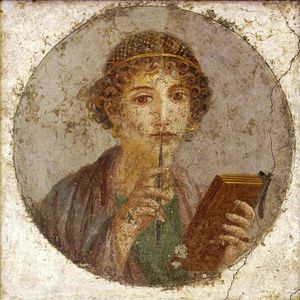 The ancient Greeks called the waxed tablet delta (Greek: δέλτος), probably because in ancient times they had a triangular or trapezoidal shape. The edges of the plates were drilled, laces, straps or rings were threaded through the holes, connecting two or more plates together. Two tablets bound together were called a diptych, three were called a triptych, and four or more were called a polyptych. The diptych was mentioned by Herodotus in the story of the cunning of the Spartan king Demaratus (VII, 239). To convey to his fellow citizens the plans of the Persian king Xerxes, Demaratus scraped wax from the diptych ("deltion diptychon"), wrote a letter on the surface of the tree itself, and then covered the entire record with wax. The clean wax tablets did not arouse suspicion: it was a common household item for a literate person.

In rich Roman houses, archives of wax tablets were kept, for which a special room was allocated — the tablinum (from Lat. tabula — "table"). Such archives were described by Pliny the Elder in his "Natural History" (XXXV, 7), but he used the term "codex" for tser, which later came to mean a parchment book of modern appearance. Noble and rich people preferred to use luxury tablets, often made of ivory, which were sometimes decorated with gold, and the outer side could have elaborate images. There was a custom according to which the Roman consuls gave such tablets to friends and acquaintances for the New Year. On the same tablets, business people and politicians scribbled drafts of documents and letters, and then dictated them to professional librarian scribes. According to Cicero, Caesar had seven scribes with him (Pro Sulla, 14).

Excavations at the Pompeian house of the financier Lucius Caecilius Yucundus on July 3-5, 1875, yielded many archaeological finds. (The finds in Herculaneum were comparable in volume, but excavations were carried out there throughout the 1930s.) The remains of a chest containing 127 diptychs and triptychs were discovered above the portico of the peristyle of the house of Jukunda. Despite the fact that they were damaged by volcanic ash and partially charred, a significant part of them could be read. The documents preserved on these tablets relate in most cases to 53-62 years, and only two-to an earlier time, 15 and 27 years. Pompeian triptychs consisted of tablets with depressions filled with wax, and were intended for writing only on the 2nd, 3rd and 5th pages. On the 2nd and 3rd pages, the main text of the document was written, then the first and second plates were connected (the second and third pages were closed), and in a special groove in the middle of the smooth fourth page, a cord was passed, sealed with the seals of signalers — witnesses who were present at the conclusion of the transaction, and each of them put The main type of documents kept in the house of Caecilius Iucundus were receipts, receipts for payment, etc.

Tablets played a significant role in the process of creating ancient books. Here the original author's idea was embodied, individual parts of the work were sketched. Only after careful finishing was the literary work transferred to papyrus ("hartu") or parchment. Sometimes the finishing of the work was not very thorough, which led to inaccuracies and errors. This is precisely the origin of numerous errors in Pliny the Elder's Natural History.