The crisis of the 3rd century in the Roman Empire

The Crisis of the Roman Empire of the third century is a period in the history of the Roman Empire, the chronological framework of which is usually defined in the years between the death of Alexander Severus in 235 and the proclamation of Diocletian as emperor in 284. This period is characterized by a number of crisis phenomena in the economy, crafts, trade, as well as instability of state power, internal and external military clashes and the temporary loss of Rome's control over a number of areas. In different historical schools, views on the causes of crisis phenomena differ, including the opinion that there is no need to distinguish the third century as a separate period of Roman history.

After the assassination of the last emperor of the Antonine dynasty, Commodus, the civil war of 193-197 begins in the Empire. A number of prominent leaders proclaim themselves emperors: Pertinax and Didius Julian in Rome, Septimius Severus, commander of the Danubian army, Pescennius Niger, commander of the Syrian legions, and Clodius Albinus in Britain. Imperial power was officially awarded by the Senate to Septimius Severus, who emerged victorious from the war and founded the imperial Severus Dynasty (193-235).

Most historians consider the political regime of the Northern dynasty to be a "military" or "soldier" monarchy. The increase in the degree of political participation of the army, the level of its independence in its political interests is associated with a number of milestone trends and moments in the military organization itself, in particular, with the active measures and transformations of Septimius Severus, who significantly deviated from the traditional vector of military policy, and also laid the foundations of the late antique army.

Septimus relied exclusively on the army, and the regime of government under him turned into a military-bureaucratic monarchy. Foreign policy was characterized by a series of successful wars with Parthia (195-199) and with the Caledonian tribes (208-211). After the death of the emperor, his son Antoninus Caracalla (211-217) killed his brother Geta, took the throne, then started an unjustified war with the Parthians and was killed by the conspirators. His successor, Praetorian prefect Macrinus (11 April 217-218), made an unsuccessful campaign against the Parthians, with whom a peace was concluded that was unfavorable for the Romans. The army was dissatisfied with Macrinus, and his Asiatic habits and effeminacy aroused general censure. Caracalla's aunt, Julia Meza, and her two daughters managed to arrange an army to the young Bassianus (Heliogabalus), who was proclaimed emperor; Meza passed him off as Caracalla's illegitimate son. Macrinus sent Ulpius Julian against him, but the soldiers killed the latter, and all the army, except the Praetorians, went over to the side of Bassianus. There was a battle at Antioch, but Macrinus, not waiting for its outcome, turned to flight and was soon killed. After Macrinus, Heliogabalus (Elagabalus, Bassian, 218-222) became the ruler of the Roman Empire. In March 222, he was killed by his soldiers. The emperor was 13-year-old Alexander Severus (222-235), during which the financial crisis worsened, as well as the threat from the growing power of the New Persian Kingdom, with which the war began in 231. Alexander was killed by rioters, which marked the beginning of an even deeper political and socio-economic crisis. 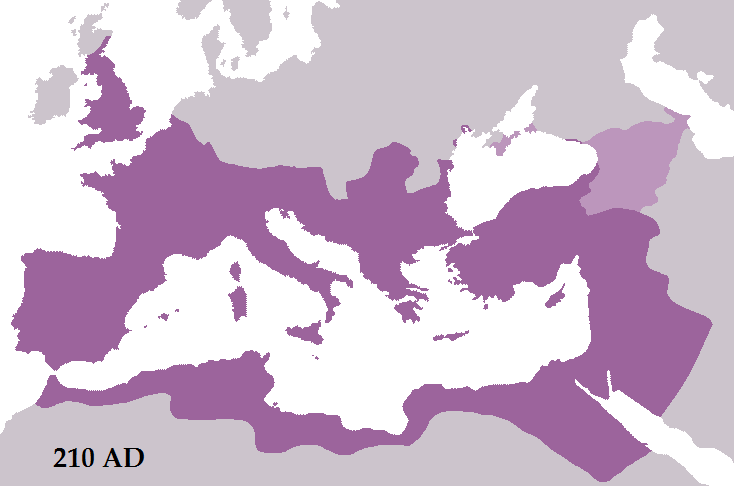 The Roman Empire before the crisis of the 3rd century AD

The first stage of the crisis

Since 235, the period of "imperial leapfrog" began, the empire was shaken by military clashes between applicants for this post, and extraordinary tax collections were introduced to supply the opposing armies. Between 235 and 268, 29 emperors (including usurpers) were proclaimed, and only 1 of them, Hostilian, died a nonviolent death (from the plague).

The year 238 became known as the year of the six Emperors because of the rapid succession of applicants. In the end, the Praetorians proclaimed the 13-year-old Gordianus (238-242) emperor, whose reign lasted several years and was relatively successful, but the young emperor died during a campaign against the Persians (probably as a result of intrigue). His successors Philip I the Arab (244-249) and Decius Trajan (249-251) still kept the situation under control, despite fighting each other, suppressing military rebellions and wars with external opponents. The death of Decius during the battle with the Goths, in which the Romans suffered a crushing defeat, marked the deepening of the crisis.

The general trend of the first period of the crisis was that the Romans gradually began to leave a number of territories, which implied extremely negative consequences. So, the Romans began to leave Dacia in the 240s, and they left the eastern part of the Wallachian plain by 242. This contributed to the fact that Roman influence on the northern Black Sea coast was undermined.

By the beginning of the 40s of the third century, the rulers of the empire decided to unite the military forces of several provinces, which were placed under the command of a single military commander — duces. Military districts (dukats) divided the armed forces into groups, the main of which were — British, eastern, Danube, Rhenish and African. In some cases, these groups put forward contenders for the imperial throne, fighting with each other. The ducal system within the Roman Empire was a major change in the army not only during the first period of the crisis, but also, in fact, throughout the third century AD.

The second stage of the crisis

The second stage of the crisis, which has become the culmination, is already characterized by continuous wars waged simultaneously with several opponents. During this period, Gallienus ruled (253-268). At the same time, the emperor, who was at the head of the central government, was forced to both repel the attacks of external enemies and fight the Roman troops supporting the usurpers.

The western part of the empire suffered from constant invasions by the Alemanni and Franks, the former even penetrating into Italy in their raids, and the latter ravaging Roman territory as far as southern Spain; the sea coast was ravaged by the Saxons, and the Marcomanni managed to get Gallienus to cede part of Upper Pannonia. The eastern provinces of the state suffered no less damage from the invasions of the Goths, Persians and other nationalities.

At this stage, the process of disintegration of the empire takes place, when the Gallic Empire and the Palmyra Kingdom fall away.

Gallienus took decisive steps to reform not only the army, but also partly the management system. Although he did not manage to solve all the problems that confronted him, however, as a result of his reforms, which did not affect the foundations of the Roman military organization, but significantly modified it, a more mobile army was created, capable of responding in a timely manner to external and internal threats.

The third stage of the crisis

The final stage of the crisis is characterized by the fact that the Romans were able to stop the main streams of barbarian invasions. In addition, the successors of Gallienus, partly using some of his achievements, managed to stabilize the situation on the borders, stop the disintegration processes and even restore the unity of the empire.

The city Wall built at the end of the crisis to protect Rome from external threats The "Illyrian dynasty" that came to power marked the gradual withdrawal of Rome from the crisis.

Claudius II of the Goths (268-270) initiated the revival of the empire by defeating the Goths and placing the throne in the hands of Lucius Domitius Aurelianus (270-275).

Aurelian repelled the invasion of Germanic tribes (who first invaded Italy), restored Roman administration in the eastern provinces, and subdued the Gallic Empire. Marcus Aurelius Carus (282-283), who came to power after another turmoil, defeated the Germans, after which the Illyrian Diocles ascended to the throne .Under Diocletian, who hardly visited Rome during his 20-year reign, restoring order in various parts of the state, the empire was strengthened and the situation relatively stabilized for about 100 years. 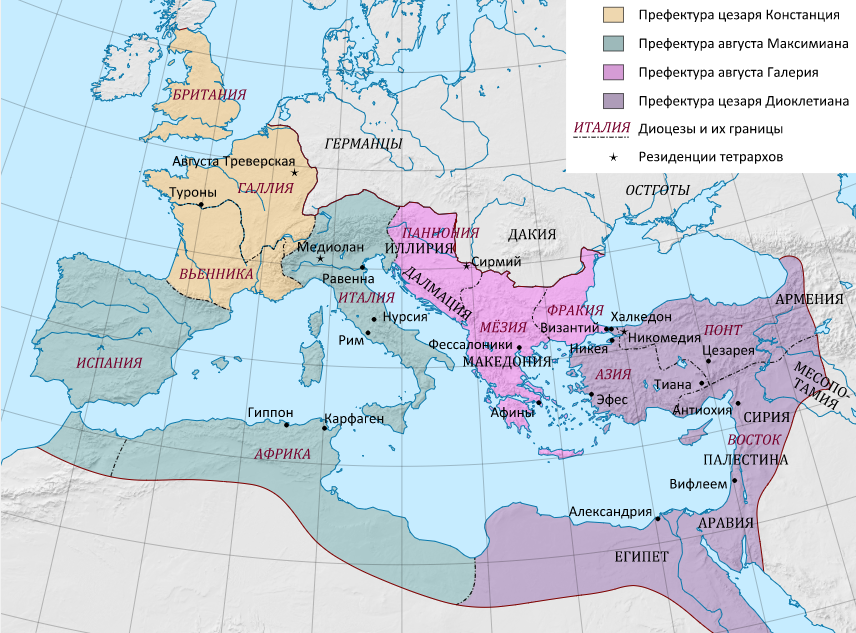 The Roman Empire after the crisis of the 3rd century AD

Even in the pre-crisis period, the agrarianization of society began, there was a reduction in the number of small and medium-sized owners against the background of the growth of large latifundia. Later, as a result of the fighting, a number of cities were destroyed, and trade and crafts declined.

In addition, the need to protect the borders from the incursions of Germanic tribes and the Persian army forced the emperors to excessively expand the army, whose maintenance costs increased, and the Roman economy could not bear them. To maintain the army's supply chain, the emperors imposed a huge fiscal burden on the population and filled in the gaps in the treasury through the so-called "coin spoilage", that is, the issue of coins that contained a large admixture of base metals instead of precious ones. "Coin corruption" led to hyperinflation. On the other hand, the tax authorities did not want to collect taxes in the now useless coin, but instead switched to a natural tax (in products). As a result, the empire's economy was largely returned to a commodity economy. This in turn caused the decline of cities, especially in the western part of the empire, and the crisis hit the most civilized and romanized areas hardest.

In the post-crisis period, the economic situation improved somewhat, but overall the economy has not recovered. The general imperial market, created in the I-II centuries AD, was almost destroyed. There was a general decline in agriculture, crafts, and industry, a deterioration in road safety, and an increase in economic and, as a consequence, political separatism.

The Roman Empire, The Emperors of Rome, Reign of the Northern Dynasty, Diocletian, Dominant