Achaean states in the second millennium BC.

During this period, Pelasgians, Lelegians, and Carians ( pre-Greek population) lived on the territory of Balkan Greece. During this era, the development of bronze, intensive social development, administrative centers such as the "Citadel in Lerna"appear.

The middle of the third millennium to the 17th century BC –the settlement of the Greek-Achaeans on the Balkan Peninsula, assimilation with the local autochthonous population. The appearance of the potter's wheel, Minoan pottery, the use of horses and chariots in military affairs.

3. Late Hellenic period or Mycenaean (XVI-XII centuries BC). The emergence of large Achaean states, such as Mycenae, Tiryns, Pylos. 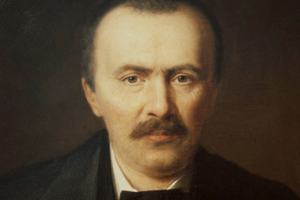 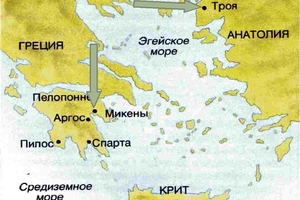 Map of Greece during the Mycenaean civilization 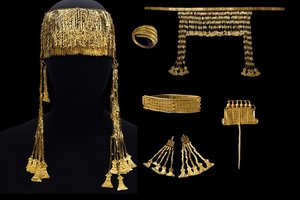 Discovery of a civilization

Until the middle of the XIX century, the history of ancient Greece was studied from the VII century BC (from the Archaic period). The history of the earlier period was known only from the reports of ancient authors. This was the case until the 1870s, or rather until G. Schliemann's discovery of Troy in 1873. Heinrich Schliemann was a German entrepreneur, polyglot, and self-taught archaeologist. He is considered one of the founders of field archaeology. Schliemann's main goal was to find a proof of the existence of Troy. He believed that the events described by Homer in his poems have a real historical reality. G. Schliemann conducted excavations of the Hissarlik hill in Turkey from 1870 to 1873, which were crowned with success. During the excavations, it was possible to find Troy under the ruins of a Greek city of a later era, ancient fortifications and several cultural layers leading back to the Bronze Age were found there. Thus was discovered the Mycenaean civilization, which preceded the later Archaic and classical eras. One of the most famous finds is the "Priam's treasure" - a collection of gold and copper fortifications, which was discovered in May 1873. After the Second World War, it is part of the collection of the Pushkin Museum in Moscow. In addition to Troy, Schliemann conducted excavations in Mycenae, Tiryns and Boeotian Orchomenos.

The social structure of the Mycenaean civilization was a class-based society. The bulk of the population were free community peasants and farmers, and there were also artisans, sailors, and merchants. In addition, there were military, administrative and priestly nobles. Slave labor was used in the maintenance of palaces, often slaves were divided into work brigades, where there were slave bosses and subordinates. In the communities, slave labor was not used. As for agriculture, grapes, olives, and cereals were grown here. The land was royal, collective for community members, private property for aristocrats, in addition to all of the above, there was a practice of renting land. The main tools were made of bronze. It should be noted that the main difference between the Achaeans and the inhabitants of Crete is the predominance of the production of weapons and military materials. Here it is worth saying a few words about why the Mycenaean civilization is so warlike. The fact is that the Achaeans acted as an ethnic entity within the Indo-European cultural and linguistic community, they were a conquering people, hence the opposition of the surrounding nature as a hostile chaos and a human warrior. 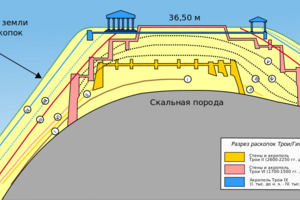 Section of the Troy excavations. 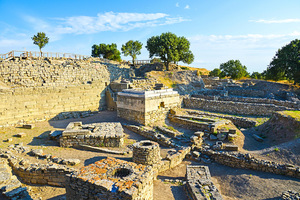 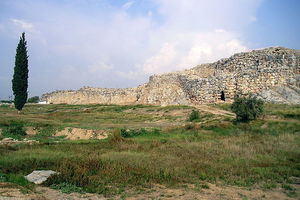 Now we should move on to the management and administrative division of the Achaeans. The Mycenaean states were a complex system of governance institutions. Wanaka-the supreme ruler, he had the highest military, administrative and theocratic power. Vanaka was subordinate to Lavaget, the commander, who performed the highest military functions after the king. In addition to Lavaget, the king's subordinates included priests, telestes, damates, and ekestes (high officials). There were also basileis-representatives of the lowest rank in the royal organization, they were at the head of the community. The country was divided into districts. At the head of each district was a corester (governor). The districts consisted of damas (rural communities) where farmers and artisans lived. Independent city-states were often at war with each other. Presumably in the 14th century BC Mycenae became the hegemon in Southern Greece. This makes the Mycenaean state the leader of the entire Achaean world. It is on the example of Mycenae that we will consider the culture of this civilization, because it is not for nothing that a whole period of Greek history is named after this city.

The oldest archaeological ruins of Mycenae date back to 3000 BC, and in the Middle Hellenic period (XX-XVII centuries BC), the top of the hill was fortified, and a necropolis with tombs carved into the rock stretched to the east. Around 1600 BC, large tombs were built for important individuals. During this period, colossal tombs in the form of tolos, that is, consisting of a long entrance corridor and a spacious round room with a conical coating, were also being built in places more remote from the city. In the Late Hellenic period, Mycenae was initially under the influence of Crete (XVII-XVI centuries BC), and later began to develop its own culture, the so-called Mycenaean, which from the XVI-XII centuries BC influenced all of southern Greece and had connections with the coasts of the Mediterranean Sea, from Syria to Italy. Around 1350, new and prominent fortress walls were built, which also include an important group of royal tombs. This was the period of Mycenae's greatest prosperity, abruptly interrupted by the devastation of the territory around 1200; shortly before 1100 BC. the citadel was also set on fire, as indicated by numerous traces of destruction and fires found during excavations, and for a long time the place remained almost uninhabited. 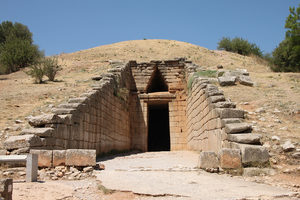 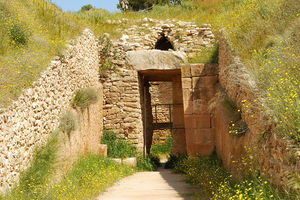 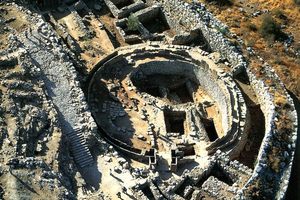 The era of greatest splendor includes the legends that were composed about these parts. Mycenae itself, according to legend, was founded by Perseus, the son of Zeus, who commissioned the Cyclops to build walls of colossal blocks, which can still be seen today. His successor was Eurystheus, who ordered Heracles to perform 12 feats. He was replaced by the children of Pelops and Hippodamia-Atreus and Fiestes, associated with the cult of Olympia: after that, Agamemnon. Son of Atreus, who was killed by Aegisthus, son of Fiestes, who became the lover of his wife Clytemestra. In turn, Orestes, the son of Agamemnon, after various vicissitudes avenged the murder of his father and for this was persecuted by the Erinii. The tragic events of this family, closely connected with the Trojan War, have come down to us in the stories of Sophocles and Euripides. Homer puts Agamemnon, king of Mycenae, at the head of the Greeks, and next to him his brother Menelaus, who became king of Sparta after he married Helen, daughter of Tyndareus, king of Sparta, who was kidnapped by the Trojan Paris and taken to Troy. It is possible to connect with the mythical wave the destruction of the so-called Troy VII, which archaeology has documented around 1240. B.C., that is, at the time of the apogee of Mycenaean civilization.

The tour starts from the lower town, where the necropolises are located. One of the most remote from the city and the most majestic is the Treasury of Atreus. The entrance corridor, the so-called dromos, is 36 m long, partly cut out of the rock and properly bounded by cut limestone blocks, leading to a door 5.40 m high, tapering upwards. It is closed by 2 colossal monolithic architraves carved from a single stone block; the largest of them weighs 118 tons. Initially, the entrance, apparently, was decorated with two painted half-columns, from which the bases remained; above the door, the surface, bounded by smaller half-columns, was also painted with bright colors. What remains of this decoration is now in the British Museum in London. Next, we enter a large circular room, tolos, with a diameter of 14.50 m. and a height of 13.20 m., covered with a dome consisting of 33 stone rings, which consistently taper up. The dome was decorated with bronze rosettes, from which holes and some fixing nails still remained. This tomb is certainly a royal one and dates back to about 1330 BC. e. It can not be the tomb of the victor of Troy VII, nor his father. 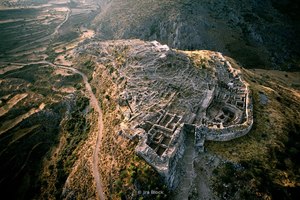 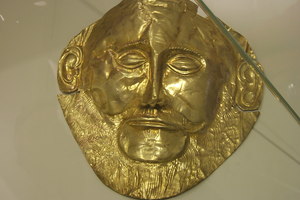 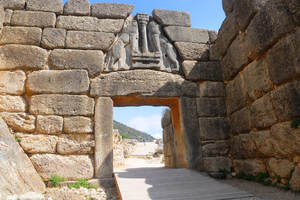 The Lion's Gate is the only surviving example of the monumental Mycenaean civilization. 1250 BC Mycenae. Modern look

Other tombs of the same type are found on the slopes of the same mountain; another group is located near the city walls. Two of them are: the Tomb of Aegisthus and the Tomb of Clytemestra; the first is the oldest of this type of tombs dating back to about 1500 BC, the second dates back to about 1300 BC. The latter was partially installed in the ancient circle of royal tombs, the so-called Circle B, discovered accidentally only in 1951. 25 graves with gold and ivory products dating back to 1650-1550 BC were found here.

The citadel is surrounded by cyclopean walls of large limestone blocks 900 m long. and a height of 6-8 m. Their height was originally supposed to reach 19 m at some points. The entrance to the walled city passes through the Lion Gate, so named as a result of the triangular relief on it with two lions, heraldically located opposite each other on the sides of the column. Protected by a bastion, the gate consists of only 4 limestone blocks: 2 jambs, a threshold and an architrave. A little further on, behind the door, the remains of a barn were found, which preserved traces of a fire in 1100 BC. some pythos found here contained charred grain. In this part of the city, to the right of the entrance and next to the barn, the oldest circle of royal tombs, Circle A, with a diameter of 28 m, surrounded by a double row of slabs, was discovered. I would like to emphasize that this is a rare example of a necropolis in the city, usually graves were built outside the city wall. This type of tomb is called mine tombs. It was here, in 1874-1876. Schliemann discovered 5 large graves, 19 skeletons, many jewels and gold products, including the famous death masks, which are now in the National Archaeological Museum of Athens. G. Schliemann believed that he discovered the tombs of the Atreid dynasty, but later they were dated 1600-1500 BC. e. All royal tombs belong to the period of the highest prosperity of Mycenae. 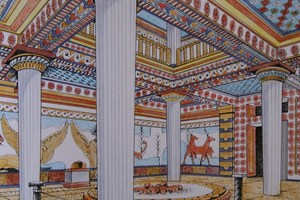 Further on, the road meanders up the slopes of the mountain among the ruins of Mycenaean houses to the royal palace, located on the highest point. Now we can see the remains of a building dating from 1400-1350 BC. The palace was built on the remains of the previous one, dating from 1600 BC. Two guard rooms precede a long passage that led to a large courtyard; from here, to the left, you can go to private rooms: a small toilet painted with red plaster and usually indicated as the bathroom where Clytemestra killed Agamemnon. On the right is a staircase leading to the official part: the atrium led to the throne room, and through the portico and lobby you could go to the sacred place-Megaron. In the center was a hearth covered with painted plaster. Four columns supported the ceiling, three of which still have their bases. As in other palaces belonging to the same era, the entire room, apparently, was painted. The floor is also covered with multicolored paintings, of which there are small traces.

In the XIII-XII centuries BC, the Dorian invasion occurs - the last major wave in the movement of the population of the early period on the Balkan Peninsula. The Achaean cities perished one by one. The Dorians destroyed palace complexes and other complex economic and cultural structures on their way. As a result of the Dorian conquest, part of the Mycenaean civilization moved to the territory of Asia Minor, part was displaced, part of the Achaeans was turned into a dependent-semi-free and slaves (Perieks, Helots in Sparta).