Ancient Greece, Hellas (other Greek :λλλάς) is a common name for the territories of city-states that were inhabited mainly by ancient Greek tribes: Aeolians, Achaeans, Ionians and Dorians. The ethnic map of Greece remained homogeneous and practically unchanged throughout the entire ancient era. 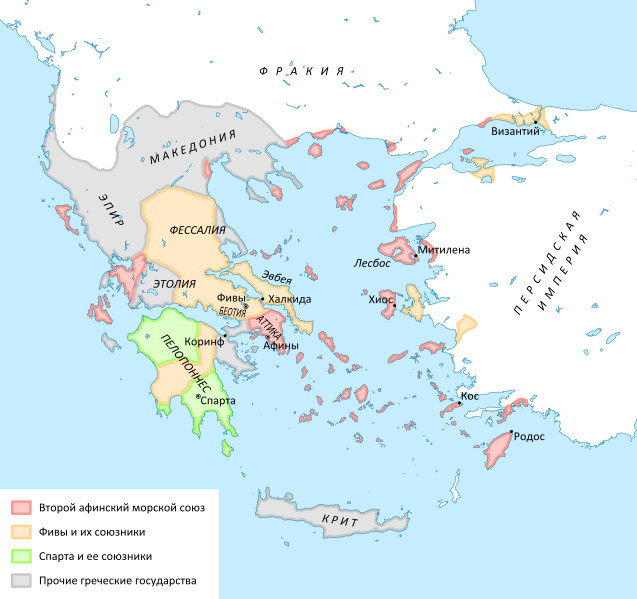 Map of the unions of Greek states in 362 BC.

To the territories that are included in the concept of "Ancient Greece", scientists include the settlement of the ancient Greeks during the period of Greek colonization, which begins with the turn of the III-II millennia BC (the emergence of the first state formations on the island of Crete) and ends in the II-I centuries BC, when the Greek and Hellenistic states of the Eastern Mediterranean were captured by the Roman Empire

Geographical boundaries in ancient Greek history were not constant, they changed in different historical epochs, narrowing or expanding as historical development progressed. The territory of ancient Greece occupied the south of the Balkan Peninsula with the Aegean Islands adjacent from the east, the coast of Thrace, the western coast of Asia Minor and part of the island of Cyprus during the Greek colonization of the VIII-VI centuries BC. In the east, it included the Black Sea Straits, the Black Sea coast (Black Sea coast) and the Sea of Azov; in the south, the coast of North Africa (Cyrenaica, modern Libya); in the west, Southern Italy, eastern Sicily; southern Gaul (modern France) and the north — eastern coast of Spain. Basically, these lands coincide with the territory of modern Greece.

The period of the highest economic and political flourishing of the polis system occurred in the Vl-V centuries BC and was called classical in the history of Ancient Greece.

The self-name of the ancient and modern Greeks-Hellenes, passed to the name of the country — Hellas (Hellas). The ethnonym "Greeks" (other Greek: γραικοί, Lat. Graeci) is derived from the Latin language and originally, apparently, belonged to one of the tribes of Northern Greece, which is reflected in the names of the cities of Gray[en] (ΓραίΑ) near the ancient city of Tanagra in Boeotia and on Euboea, was adopted by the Romans, probably from colonists from Euboean Graia in Cumae. Georgios Hadzidakis, a professor of linguistics and Indian philology, claimed that "Greeks" were an ancient tribe that partially migrated from the city of Tanagra to Southern Italy (Cumae). The Romans transferred the name "Greeks" to the entire Hellenic nation.

In historical science, it is customary to distinguish the following stages in the history of Ancient Greece::

After the Roman defeat Macedonians at the Battle of Cynoscephalae (197 BC). E.), the Romans constantly interfered in the internal affairs of the Greeks, supporting the oligarchic strata against democracy. In the summer of 196 BC, the Roman general Titus Quinctius Flamininus proclaimed the "freedom" of the Greeks at the Isthmian Games, a belief that briefly made Rome popular in Greece. From that time on, Greece was constantly under Roman influence. Macedonia lost its political significance, and in 148 BC, after the suppression of the Andriscus revolt, it was transformed, along with Iliria and Epirus, into a Roman province. The Aetolian League was dissolved by the Romans. In 146 BC, the Achaean Alliance was also defeated. Thus, the whole of Greece was under the rule of Rome.

Greece was turned into the Roman province of Achaia (except for Athens, which was nominally considered a free city). From the fourth century AD, Greece formed the core of the Eastern Roman Empire.