The first Egyptian king of this period, Ptolemy Soter, used local traditions preserved from the dynastic period to consolidate his power, and founded the Ptolemaic dynasty, which ruled most of the time and, therefore, his state is also called Ptolemaic Egypt or the Ptolemaic state.

It lasted until it was conquered by Octavian in 30 BC, when it became a province of Egypt under the Roman Empire. 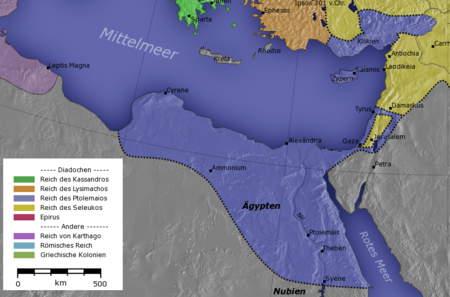 In 332 BC, Alexander the Great arrived in Egypt to conquer it, but was proclaimed Pharaoh and an incarnation of Zeus-Amun. Thus ended the Achaemenid rule in Egypt. 9 years later, in 323 BC, Alexander died suddenly in Babylon. His death led to long wars between the diadochi, who fought for power in the vast empire. The result of this struggle was the division of the territories captured by Alexander. Egypt went to Ptolemy I (reigned 323-283 BC), who proclaimed himself king in 305 BC. The dynasty founded by Ptolemy ruled Egypt until its conquest by the Romans.

Ptolemy I is usually described as an intelligent and talented politician. This is also indicated by the fact that he is the only one of the Diadochi who died of natural causes. He declared that Alexander the Great was the patron saint of his family, which was confirmed by the fact that Alexander was buried in Alexandria. The cult of Alexander spread throughout Egypt. Then, in 270 BC, Ptolemy II's wife, Arsinoe II, died and was soon deified. Subsequent rulers were declared gods during their lifetime, shortly after their ascension to the throne. This cult, firstly, was inherited from Ancient Egypt, and secondly, was deliberately strengthened by the Ptolemaic dynasty in order to prove its legitimacy and strengthen its power.

Under Ptolemy I's son, Ptolemy II (reigned 283-246 BC), Egypt rose to its greatest power under Ptolemy III (reigned 246-222 BC). The Ptolemaic empire included Cyrenaica, Cyprus, Palestine, southern Syria, western Asia Minor, the coast of Thrace and the Hellespont, and the Aegean Islands.

Beginning with the reign of Ptolemy IV Philopator, who preferred a life of leisure and luxury, Egypt's power waned. Revolts of Egyptian tribes led to the loss of part of the country's territory. The Alexandrian Sosibius and the favorite Agathocles, having actually begun to rule the country under Ptolemy IV, seized power under the young Ptolemy V Epiphanes, killing his mother and dispersing all prominent people who posed a threat to them. Strategist Tlepolem was able to take away the regency, but was a poor manager. Seeing the weakness of Egypt, Antiochus III the Great, king of the Seleucid state, and Philip V of Macedon, king of Macedon, jointly attacked and were able to capture the islands in the Aegean Sea, Caria, Southern Syria, Palestine, and Kelesyria.

The forced alliance with Rome did not prevent the invasion in 170 BC by Antiochus IV Epiphanes, who overthrew the minor Ptolemy VI Philometerus and placed Ptolemy VIII Euergetes, who was controlled by him, on the throne. After a long struggle, Ptolemy VI, with the support of Rome, was able to regain power in Egypt, but died in the Battle of Antioch in 145 BC.

After the death of Ptolemy VIII in 116 BC, in accordance with the will, the second wife of the deceased king Cleopatra III wanted to put her minor son Ptolemy X Alexander I on the throne. However, the people achieved the accession of the eldest son — Ptolemy IX Soter II. Cleopatra III was not content with the role of co-ruler alone, and in 107 BC attempted a coup d'etat by summoning Ptolemy X, who was governor of Cyprus, from Cyprus. Ptolemy IX, not wanting to fight with his mother, fled to Cyprus, where he declared himself king, and then went to fight in Syria and Palestine, from where he was expelled by Cleopatra III. By 89 BC, Ptolemy X had become extremely unpopular in Egypt and was assassinated. Ptolemy IX became the ruler of Egypt.

The daughter of Ptolemy IX, Berenice III, married Ptolemy X, and after his death in 80 BC, she ruled for 6 months, after which she was forced to marry Ptolemy XI Alexander II, who soon killed her. The king was torn to pieces by the angry people, but Egypt lost the last direct legitimate heir from the Ptolemaic family. Fearing Roman interference, the son of Ptolemy IX's concubine, Neos Dionysus (Auletes), was proclaimed king.

The Roman Empire, which had intervened in Egyptian politics for many years, drew attention to the low legitimacy of the king of Egypt and his depraved lifestyle, which he preferred to rule the country. It is believed that the annexation of Egypt to Rome was part of the political program of Julius Caesar, who was then the leader of the Republican party. However, Ptolemy XII managed, by paying a huge sum of 6 thousand talents (155 tons of 400 kg of silver), to buy Caesar's support and conclude an alliance treaty. Despite this, in 58 BC. Cyprus, which was ruled by another son from a concubine of Ptolemy IX, was declared a Roman province and troops were sent there. Fleeing the wrath of the people, Ptolemy XII went to Rome to ask for help; his wife Cleopatra VI Tryphaena ruled Egypt for 1 year. Berenice IV succeeded the deceased queen, but in 55 BC, with the support of Roman troops, was deposed and beheaded so that her father Ptolemy XII could once again reign on the throne of Egypt. Forced to pay off the debts incurred in Rome, Ptolemy XII distributed treasures and public offices to the Romans. After his death in 51 BC. his son Ptolemy XIII and daughter Cleopatra VII became co-rulers.

In the Ptolemaic administration of Egypt, both Greek-Macedonian and Egyptian features were organically combined. The king had full power. His mainstay was a huge staff of officials. A huge amount of clerical correspondence has been preserved. Records were kept in Greek. At the Ptolemaic court lived the traditions of Alexander: there was a "royal journal", and extensive correspondence was conducted. There were higher court positions: "relatives", "equal in honor to relatives", "first friends", "equal to first friends", "friends", "successors", etc.

At the top of the administrative hierarchy was the position of dioiket (other Greek: διοικητής — steward) — the manager of the economy and finances, who was in charge of the royal treasury, accounting for economic resources, accounting and collection of revenues, and control of expenditures. Dioiket was the first dignitary in the state and with certain abilities could become all-powerful. Such, for example, was dioiketes Apollonius in the reign of Ptolemy II.

All localities, except for three polis, were part of chora (other Greek: земляρα — land, country), that is, they did not have self-government. The Hora was divided into nomes (this division has been preserved since ancient times), which in many respects continued to be separate. The nomes were divided into toparchies, which in turn were divided into comas. Herodotus and Strabo mention the smallest unit of division — arura (other Greek: ἄρουρα), the measure of land area for the Greeks is about 0.024 ha, for the Egyptians-about 0.2 ha. The latter explains that "such a precise and fine division is necessary because of the constant mixing of borders caused by the Nile during floods."

The functions of nomarchs passed to strategists (other-Greek στρατηγός — commander, leader). The secretary in charge of all the nome's office work was called the tsar's secretary. There were corresponding posts in toparchies and comas. Their assignment depended on dioiket.

The activities of all these officials were closely linked to financial officials who also reported to Dioiket. The chief financier in Nome was the housekeeper (Greek: Oἰκονόμος-house manager, landlord). A third-century BC" Steward's Manual " has come down to us, giving a clear idea of his duties. In fact, the housekeeper took care of the entire economic life of the nome. The controller was supposed to check his activities.

In the administrative center there was a cash register (trapeza) headed by a trapezite (other Greek: τραπεζίτης — money changer, banker), which performed various monetary operations and, above all, accepted new receipts. There was also the main grain warehouse (tesaurus — other Greek тесησαυρός — treasury, treasury storage, storeroom) under the control of a sitologist (from other Greek σιτολογία-collecting bread or food supplies). Trapeza and tesaurus had field offices.

In Hellenistic Egypt, unlike the Seleucid Empire, the poleis did not play a significant role. There were only three of them in the entire state: Alexandria, Naucratis (an old Greek colony) and Ptolemais (founded by Ptolemy I). At the same time, ancient Egyptian cities were significant, although they did not have self-government: Memphis, Thebes, Hermopolis, Heracleopolis, and others. Polis did not belong to the Hora and were not part of the administration of the nome. The citizens of the polis formed an urban community and were united into philae (other Greek: φυλή-clan, tribe, tribe) and demes (other Greek: δῆμος — people; region, country), just as it was in Greece. In Naucratis and Ptolemais, they elected the city council and some officials. In Alexandria, since it was the capital, there was no city council. It was a city of a huge number of nationalities: Macedonians, Greeks, Thracians, Cretans, Iranians, natives of Asia Minor, Jews, Syrians and Egyptians lived here. The latter were deprived of any political rights. The rest of the population was united along ethnic lines in polytheisms (other-Greek. πολίτευμα — a way of governing the state, a political principle; state administration; state structure), independent of each other and subordinate only to the royal administration. The degree of their self-government was not the same. 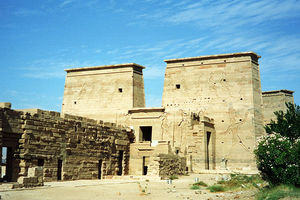 Alexandria was the largest Hellenistic city, the most important center of crafts and trade. The geographer Strabo (64/63 BC — 23/24 AD) wrote:

It is the only place in all Egypt for trade by sea, because of its excellent harbor, and for trade by land, because everything is easily transported by the river and collected at a point that represents the largest market in the world.

Alexandria was built according to the plan of the architect Deinocrates of Rhodes and had a regular layout. The city was divided into five blocks. In the royal quarter there was a Ptolemaic palace, a theater, a Museion[6], a library, and the tomb of Alexander the Great.

The Ptolemaic attitude to the priesthood was twofold: on the one hand, the independence of this class was somewhat curtailed, but at the same time the priests were strongly supported by the kings as a very influential social force. It is known from many inscriptions that the Ptolemies granted many lands, along with their revenues, to local deities.

At the head of any of the temple was the Bishop (al-Greek. ἀρχιερεύς high priest, the high priest), or epistat (al-Greek. ἐπίσταθμος — head), representing the local priests when dealing with the government[citation 78 days]. Congresses of priests were periodically convened (synods - from the Greek σύνοδος-a gathering, assembly). Temples had special rights, such as the right of asylum.

Temples in Egypt have always been major economic centers. This was especially noticeable in the Thebaid, where the temple of Horus in Edfu, the temple of Isis on the island of Philae, and others were located. Temples had certain privileges in the field of handicraft production. For example, the right to produce sesame oil, which was a monopoly of the state, the right to make special fabrics. The priests received a cash allowance from the treasury and collected offerings from the faithful.

All aspects of the economic and social life of Egypt were regulated by certain decrees and regulations, some of which have survived to our time. These are, for example, the decree of 261 BC on slavery and the so-called "Tax Charter" of 257 BC. Egyptian Hellenistic law was an amazing interweaving of Greek and ancient Egyptian legislation. There were different courts of justice for the Egyptian and Greek populations, as well as for the Polis and chora. Questions between the Greeks and Egyptians were decided in a general court.