Alexander the Great is one of the most charismatic and famous personalities of the Ancient world. He was only 20 years old when he came to power. As a result of Alexander the Great's campaign to the East, a new powerful state emerged that stretched from the Aegean Sea to the Indus River basin and from the Libyan desert to the Caspian Sea.

At the turn of the fifth and fourth centuries BC, it became clear that the main enemy of the Greek poleis, the Persian Kingdom, was significantly weakened and all the prerequisites for the beginning of conquests were formed:

Before the start of the campaign, Alexander the Great had only 28 thousand infantry and 4.7 thousand cavalry. In fact, he was going all in, since there was only enough food in his troops for a month.

- deprive Persia of all military bases in Asia Minor

- liberate the Greek poleis and make them military allies 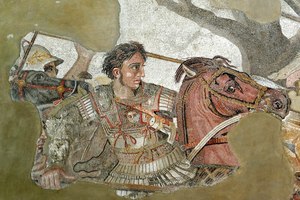 Alexander the Great, depicted in a Roman fresco in Pompeii, 1st century AD.

Alexander the Great's military campaign to the East

Alexander the Great was confronted by the Persian king Darius III, a timid and indecisive man, who from the very beginning of the military campaign made a number of strategic mistakes that ended in his collapse. The Persian army consisted mainly of cavalry. Darius ' attempts to create regular infantry were unsuccessful. The infantry consisted of mercenaries and could not offer significant resistance to the Macedonians. 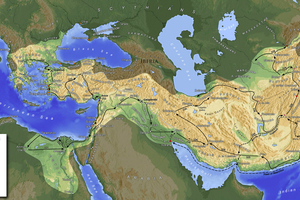 When Alexander the Great's campaign to the east ended, revolts began on the borders of the empire. After the sudden death of Alexander, the huge empire he created began to collapse rapidly. Macedonsky did not have time to leave behind an heir and a power struggle began between his former associates.