Macedonia (Greek: ΜακεδονίΑ — was an ancient Greek state on the Balkan Peninsula with its capital in Aegae and then in Pella, bordering the state of Epirus to the west, Thrace to the east, and Thessaly to the south.

In the prehistoric period, Macedonia was a territory through which Neolithic cultures penetrated into Europe from Asia Minor (for more information, see Prehistoric Greece). At the end of the Bronze Age, various Indo-European tribes invaded Macedonia from the north, some of which went further to Asia Minor, and some to Greece.

The word "Macedonia" comes from the Greek μακεδνός, which means "high".

The first Macedonian state was founded in the 8th century BC or the beginning of the 7th century BC by the Greek Argead dynasty-immigrants from the southern Greek city of Argos (hence the name Argeades), who traced their origin to Hercules. The first king of Macedonia — Perdiccas I (according to later data — Karan). 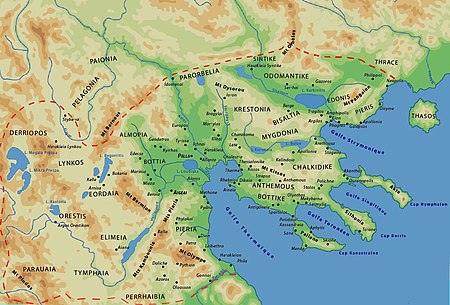 Territory of the Macedonian State

The mythical founder of the Macedonian state was called Karan, identified with the son of the Argos king Temenus Archelaus. According to Justin, 924 years passed from Karan to the last king of Macedonia, Perseus, which makes it possible to date the reign of Karan to the XI century BC.

According to Herodotus and Thucydides, the founder of the reigning dynasty is considered to be Perdiccas I, a native of Argos, located in the eastern part of the Peloponnese. According to Macedonian lore, he fled to Macedonia with his two brothers and first took a job as a goatherd shepherd. According to ancient historians, the Macedonian tribes that lived in the basin of the Haliakmon River (Greek: Αλιάκμων or αλιάκμονας) and the surrounding plateaus, in the VIII century BC. They began to move east to the coast of the Aegean Sea and north to the Strymon River (ΣτρυμώΝ or στρυμόνας), displacing, exterminating or assimilating local tribes of Illyrian, Thracian, and Phrygian origin.

Having inherited, as it was believed, the lands of the mythical kingdom of Midas, Macedonia, headed by the Argead dynasty, took shape in an independent state under Tsar Alexander I at the beginning of the V century BC. e. It was under him that the royal coin began to be minted, under him Macedonia, which existed for a long time in isolation, came into contact with Hellas, under him the country's territory expanded significantly. Before Alexander I, Macedonia was inhabited by various tribes with their own leaders, and the Macedonian kings ruled only nominally in the area of Central Macedonia.

At the beginning of the fifth century, Macedonia and its surrounding lands were conquered by the general Mardonius, sent by the Persian king Darius I to conquer Greece. The Persians helped the Macedonian king consolidate and expand his power (see Achaemenid Macedonia). After the defeat of the Persians, the expansion of the Macedonian state continued, and Alexander's successor, Perdiccas II, felt strong enough to go to war with Athens (420 BC). During the Peloponnesian War, Perdiccas II used the troops of Sparta to suppress the separatism of the mountain tribes.

In the time of Amyntas, Macedonia was a backward, barbaric country surrounded by barbarian peoples, without large cities and definite borders, where none of the Greeks ventured to enter, and the Persians did not even want to send troops to conquer the poor, inaccessible terrain.

Perdiccas ' successor Archelaus built fortresses, built roads, and created a regular army. Under him, the cultural influence of Hellas in Macedonia significantly increased, the famous Euripides lived at the court of the king and even held an official position. At the end of the 5th century BC, Macedonia establishes power in the adjacent Greek cities of Pydna and Larissa. The borders of the Kingdom of Macedon run roughly along the river Haliakmon in the south, which separates Macedonia and Thessaly (the region of Hellas), the Aegean Sea and to the river Strymon in the east, which separates from Thrace. The Pindus range in the west separates Macedonia from Epirus and Illyria, in the upper reaches of the Axia (Vardar or Axios in modern times). Greece) serves as the border in the north.

Soon after the assassination of Archelaus (399 BC), due to unfavorable external factors and internal troubles, the Macedonian Kingdom weakened. As a result of the fierce struggle for the throne, the kings were replaced quickly. By the middle of the fourth century BC, the country was on the verge of collapse.

In the first half of the IV century BC, the country was torn apart by internecine strife and there was a real threat of the Thracian and Illyrian tribes seizing the country. It was the external threat that allowed Philip II to concentrate his armed forces, repel external pressure and force the Macedonian clans to submit. Philip's far-sighted, strategically balanced policy strengthened the state and predetermined the expansion of the Macedonian Kingdom into the territory of Hellas, by then weakened by endless strife.

Under King Philip II (359-336 BC). e.) the territory of Macedonia expanded to include the rich gold mines of Pangaea, Halkidiki, all the Greek city-polis on the Thracian coast of the Aegean Sea, the lands of the Thracians in the east, the Illyrians in the west, and the Peons in the north. Epirus and Thessaly became vassal states of Macedonia. After the Battle of Chaeronea, the entire Hellas mainland, with the exception of Sparta, recognized its dependence on the Macedonian king. In their attitude to Philip II, the Greeks were divided: some (Demosthenes) saw him as an aggressor, a strangler of the freedom of Hellas, while others (Isocrates) hailed him as a leader capable of rallying the fragmented Hellas.

During this period, Macedonia was under the strongest cultural influence of the ancient Greek states, while preserving its ancient identity. For example, the architecture of the palaces in Pella is closer to the Cretan-Mycenaean style than to the classical one, although it should be noted that due to the political structure of the Hellenes, they preferred to build temples instead of palaces. The family structure was also different, polygamy was allowed, and Philip II, in addition to Olympias, Alexander's mother, had several other wives, although they all had different status. To the refined Greeks, the Macedonians of that era were rude and ignorant, with barbarian morals. The religion of the Macedonians, although it had Thracian influence, did not differ from that of the rest of the Greeks. The Macedonians worshipped the gods of Olympus. Having completed the preparations for the campaign to the possessions of Persia, Philip II did not have time to implement his plans. He was killed like the previous Macedonian kings, but left a strong regular army and a strong state.

Philip's son Alexander III (the Great) (356-323 BC) During his reign, he managed to expand the borders of the Kingdom of Macedon, including not only the Greek poleis, but also the entire Persian Empire, Ancient Egypt and part of India, and thereby creating an empire. However, it is hardly appropriate to call the cosmopolitan empire of Alexander the Great a kingdom, because after the death of the conqueror himself, it did not last long, divided between his military leaders — diadochs. Macedonia and Greece went to one of the military leaders named Antigonus I One-Eyed, who founded the Antigonid dynasty. The largest part of the empire included the Seleucid state.

Alexander actively used the cultural heritage of the conquered powers, but at the same time introduced the conquered peoples to the culture of Greece and encouraged the study of Greek sciences. Although the newly formed empire collapsed shortly after Alexander's death, its legacy was preserved and allowed the conquered peoples to enter the Hellenistic era. The population of the Hellenistic countries of Asia, even in the second century AD, was more than a quarter of the world's population. Koine Greek has been the international language of most countries for more than a millennium.

In 330 BC, the commander of Alexander the Great, Zopyrion, made a campaign to Scythia, as a result of which his thirty-thousandth army was defeated. 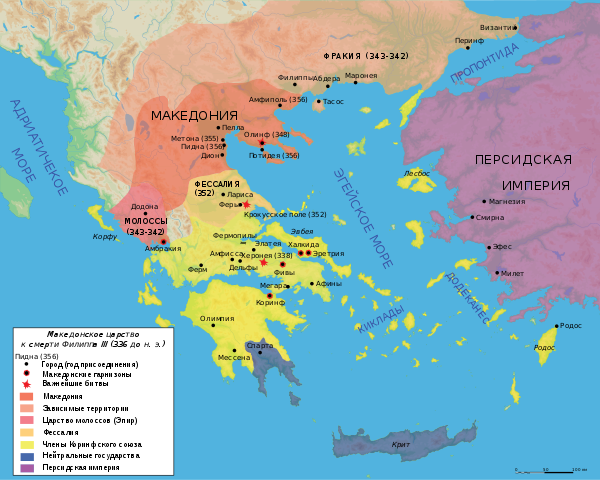 Kingdom of Macedon and its dependencies in 336 BC

Pyrrhus, king of Macedon and Epirus, defeated the Romans in 279 BC without gaining fame. The relative smallness of the Macedonians made it impossible to contain the onslaught of the Roman Republic, and Perseus of Macedon did not offer the expected resistance to the invaders. The road to the capture of Achaia was open.

In 215 BC, Macedonia entered the first of three wars against Rome: the second (197 BC) and third (168 BC) wars that were lost resulted in the overthrow of the ruling dynasty. When Macedonia was conquered by the Roman Republic, the country was divided into four independent republics with an aristocracy at the head, which paid tribute to Rome. In 149 BC, an impostor named Andriscus appeared in Macedonia, posing as Perseus ' deceased son Philip VI. This led to the Fourth Macedonian War. In 148 BC, the Romans defeated the False Philippi. The result was the declaration of Macedonia as a Roman province in 146 BC.