Major events in the social life of Sparta at this time were the reforms of Agis and Cleomenes. The initiative to carry out reforms came from above, from the Spartan kings, but at the same time it was based on the demands of the masses. The writings of the philosopher Sphere, a disciple of Zeno, the founder of the Stoic school, were very popular among the Spartan leaders in the third century. In the spirit of the then fashionable stoic philosophy, he criticized modern society, the decline of morals, luxury, wealth, and self-interest, while at the same time extolling antiquity and idealizing the ancient Spartan constitution, the system of Lycurgus, to which he devoted a special treatise. The Spartan king Agis IV (245-241), and later Cleomenes, was a follower and ardent admirer of Sperus. Agis, says Plutarch in his biography of this king, "surpassed not only his co-ruler, King Leonidas, but all the kings after Agesilaus the Great, by his intelligence and high qualities of heart" (Plutarch, Agis, IV). When Agis became king, his goal was to revive ancient Sparta. To do this, in the spirit of the doctrine of the Sphere, he first considered it necessary to transfer the land into the hands of the state and distribute it to small clerks to landless Spartiates; in addition, in his opinion, it was necessary to conduct cassation of debts. The young tsar agitated for these reforms first among the ruling stratum, and then among much wider circles of the free population. Agis ' agitation was a success. Among the aristocracy, there were people who, partly for ideological and partly for selfish reasons, joined the reform party. Agis was supported by his uncle Agesilaus, Agesistratus ' mother, Lysander, a descendant of Lysander, who became famous in the Peloponnesian War, and some other rich and influential people of Sparta. Unfortunately, our information about Agis is very incomplete and one-sided.

Plutarch evaluates Agis mainly from a moral point of view and explains all the reforms with the moral motives of a young ideally minded ruler: In reality, the situation seems to have been different. Agis, like Cleomenes who followed him, sought to transform Sparta into a Hellenistic military-bureaucratic state with centralized (royal) power and establish Spartan hegemony in the Peloponnese. To do this, it was necessary to reform the state system of Sparta and increase the number of full-fledged and combat-ready Spartans, providing them with land. Agis originally intended to carry out his reform through the Ephorate, and for this purpose, in 243, he sent his supporter Lysander to Ephora. Chosen by Ephorus, Lysander immediately submitted the bill to Gerusia, the highest state body in Sparta. Gerusia rejected Lysander's proposal, and he moved the bill to Apella. In Apelles, Agis himself defended the bill, abandoning his vast estates worth 600 Attic talents in favor of the state. Agis advocated the restoration of the Lycurgus system. "I want," said Agis, " to banish avarice and pride from Sparta. I am afraid that the difference in lifestyle and corruption of morals will bring discord and corruption to our state... " In appearance and lifestyle, King Agis looked like an ordinary citizen. Following the philosophers of the Cynic school, he wore a short cloak, long hair, led a harsh lifestyle and ate simple food. Agis ' speeches turned the oligarchs against him, who called the reformist tsar an egoist who sought to establish tyranny in Sparta. In the following year, 242, the situation became even more acute, Lysander's term of office expired, and he left the ephorate. The new ephorate consisted exclusively of oligarchs. After that, Agis was forced to resort to more drastic measures: disperse the ephorate, open debtors ' prisons and cash debts. The debt receipts were piled up and burned in the square. In an effort to increase the combat capability of the Spartan army, Agis offered to give land plots of 19,500 to the Spartiates and Periecae. At the same time, Agis proposed to grant the Perieks civil rights. It did not come to the redistribution of lands, since the king had to leave in a hurry to fight the Aetolians who invaded the Peloponnese. Taking advantage of the tsar's departure, the opponents of the reforms persuaded the citizens, canceled the reform, and tried the reformer himself. After returning from the theater of operations, Agis was accused of striving for tyranny and sentenced to death. Agis, as well as his mother and grandmother, were strangled in prison. However, Agis ' death did not decapitate the movement that had begun. A few years later, a new king, Cleomenes III (235-221), who was married to Agis ' widow, succeeded Agis. Cleomenes learned a lot from Agis ' experience. It was clear that the reform could only be carried out by force, through a military coup, destroying the ephorate and Gerusia that had hindered its implementation. The war with the Achaean Alliance, which sought to establish its hegemony in all the cities of the Peloponnese, provided an opportunity for the young king to demonstrate his outstanding military abilities. After one of the victories over the Achaeans, Cleomenes with a detachment of mercenaries moved to Sparta and carried out a coup d'etat. Cleomenes ' soldiers stormed into the sissitia where the Ephors were stationed, threw out their chairs, and killed them. 80 of the most influential and anti-reform oligarchs were expelled, and ephorat and Gerusia were destroyed. "If the Ephors," said Cleomenes in the assembly of the people, " had not so abused their power, they might still have been tolerated, but now they have surpassed all patience. They have completely destroyed the royal power, exalting their own; they expel some kings at will, bring others to justice, and kill others. The Ephors declare all those who seek to restore the constitution of Lycurgus to be their enemies "(Plutarch, Cleomenes, 10). In conclusion, Cleomenes stressed that if he could peacefully cure Sparta of all the" imported diseases " — luxury, luxury, debt and loans, and most importantly, from the source of all vices — poverty and wealth, he would consider himself the happiest of all the kings of the world. 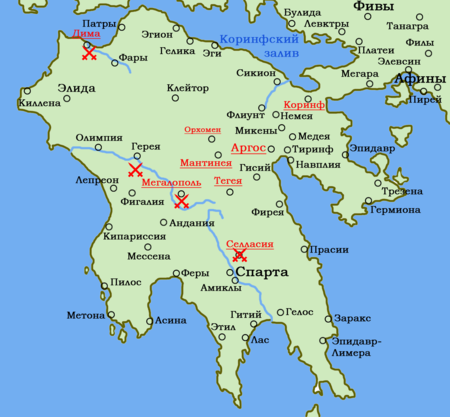 Map of the Cleomenean War

The day after the coup, Cleomenes called a national assembly to explain the coup and begin reorganizing the state on a new basis, cassating debts and redistributing property. The redistribution of property greatly increased the number of citizens and able-bodied warriors, and several thousand Periaks were added to the civilian lists, making the Spartan militia now an impressive force. Cleomenes ' economic measures were only a prelude to his further political and social reforms. Cleomenes sought to educate the Spartan youth in the spirit of stoic philosophy. He dreamed of remaking people, making them "good in every way." Therefore, according to Plutarch, Cleomenes paid special attention to the upbringing and education of young people. The Spartan youth spent their time in training, gymnastics, and military exercises. The education was led by the tsar, who himself was an example of simplicity, modesty and moderation. The external success of the reforms was complete.

Cleomenes ' popularity in Sparta increased. "Cleomenes," writes Plutarch, " aroused great astonishment by his energy and intelligence. Those who used to laugh at him when he said that in proclaiming the cassation of debts and the redistribution of lands, he took the example of Solon and Lycurgus, now fully believed that it was he, and not anyone else, who was responsible for all the changes that took place in the Spartans " (Plutarch, Cleomenes, 7, 8, 10. 23.). The reform carried out by Cleomenes infused new forces into the Spartan community, raised the prestige of the royal power and made Sparta capable of new wars and victories. The results of the transformation were not slow to affect the war with the Achaean Union. In this war, Cleomenes, relying on his troops, achieved success. Cleomenes ' detachments were widely admired and admired. Cleomenes was looked upon as a deliverer from all ills and a harbinger of new life. The mass of poor people in the cities of the Peloponnese, through which the Spartans moved, went over to the side of Cleomenes or expressed sympathy with him, ready to start a massacre of their rich oligarchs at his first order. Everywhere the people demanded the cassation of debts and the redistribution of land. Arcadia, Argos, Corinth, and part of Achaia supported Cleomenes. Then the head of the Achaean Union and its de facto dictator Aratus, fearing the outbreak of a democratic movement and seeing no other way out, entered into negotiations with the Macedonian king Antigonus Doson. Class interests prompted Aratus to abandon all that had been achieved in the previous years in the struggle against Macedonia. He was a rich man himself and defended the interests of the rich. The Macedonian king moved to the aid of Aratus with a 40-thousandth army. He inflicted several defeats on the Spartans, broke into the Peloponnese and captured the cities of Orchomenus, Mantinea and others, subjecting them to a brutal defeat. Antigonus, however, did not stop there. His goal was to defeat Sparta. The situation for Cleomenes was becoming critical. Surrounded by enemies, he resorted to the last resort: conscription into the Helot army. According to one version, six, and according to another — nine thousand helots were allowed to buy off for five Attic mines, which was a very large amount. How many helots were there in Sparta in the third century, if nine thousand of them had the means for redemption! But this, however, did not save the situation. On the approaches to Laconica, in the defiles of Sellasia, in 221, Cleomenes suffered a complete defeat, losing most of his 20-thousandth army. Macedonia won. Cleomenes fled to Egypt to join his ally Ptolemy Euergetes and died there a few years later.