The first Athenian naval alliance, also known as the Delian Alliance, Delian Symmachia, was an alliance that emerged from the general alliance of the Hellenic states against the Persians after the Spartans, who had tried several times in vain to maintain their maritime hegemony after the Battle of Plataea, finally ceded it to the Athenians (477 BC). Aristides and Cimon played a prominent role in the creation and expansion of the Athenian Maritime Union.

The goal of the alliance was a war against the Persians, in order to free the Greeks still subject to them and avenge the campaign against Hellas. The Athenians chose annually ten Hellenotamii to manage the allied treasury, which was located on Delos, in the sanctuary of Apollo. The Union was a symmetry for all time. He developed trade and ensured the security of communications, so he was supported by merchants and artisans. The main goal was achieved with the conclusion of the Peace of Callia, presumably around 449 BC. e., from this point on, the desire of Athens to turn the union into its protectorate became more pronounced. The Athenians managed the affairs of the union with the assistance of representatives of other allied states, but they could easily exert pressure on them, making up a majority of votes from representatives of small cities (all allied states had an equal right to vote). At first it was decided that the states could serve the cause of the union by equipping ships or contributing money; but soon they began to prefer monetary contributions (foros) in order to achieve greater uniformity in the equipment of ships and crew. The distribution of these contributions was entrusted to Aristide. Only large states like Samos, Chios, Lesbos, perhaps Phazos and Naxos were recognized as independent taxable units. The rest of the cities were divided into three districts: Insular, Ionian, and Hellespont; later two more were added: Thracian and Carian. 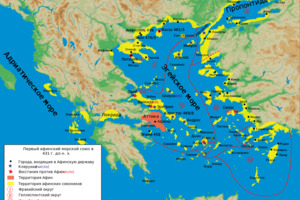 The first Athenian naval alliance in 431 BC.

In 454 BC, the union had 208 voluntary and involuntary members. The total amount of tribute was 460 talents per year, but in 425-424 BC Cleon increased it to 1,460 talents. As time went on, the Allies became more willing to contribute money in lieu of shipping ships. This increased the power of the Athenians in the alliance, who now decided to extort money by force from careless payers and, by subjugating those who fell away, turn them into subjects; they first demonstrated this approach at the Naxos (469 BC).

Taking advantage of the rumor about the appearance of the Persian fleet in the Archipelago, the Athenians in 454 BC moved the union treasury from Delos to Athens. By this time, all the cities except Samos, Chios, and Lesbos were tributaries to Athens; the allied Sanhedrin was apparently destroyed, and the alliance became an Athenian naval power. The treasury of the goddess Athena began to go 1/60 of the entire tribute. The Athenians began to interfere in the internal affairs of the allied cities, keep garrisons in them, demand allies for trial in more important cases and appeals to Athens, and so on. Despite the strict measures of the Athenians, one by one the cities fell away from the union. The most striking example is the history of the fall of the island of Samos in 440. The Athenians tried to reward themselves for falling away with new amounts of tribute. At the beginning of the Peloponnesian War (427 BC), they severely punished the fallen Mytilenians and sent their clerks to their land. In 426 BC, they proved themselves, like Peisistratus, "sea-sweeteners", clearing Delos of graves and burials, and forbidding henceforth to be born and die on the sacred island. After the Sicilian disaster, massive defections of the allies began, and in 404 BC it was disbanded.