Pisistratus, son of Hippocrates (Greek: πεισίστρατος) (c. 602 BC, Athens-spring 527, ibid.) — Athenian tyrant in 560-527 BC (with interruptions). Peisistratus came from a noble family related to the ancient Athenian kings. Between 565 and 560 BC, he commanded the Athenian forces in the Athenian-Megarian War and inflicted a series of defeats on the Megarians. In political life, Peisistratus began his career in the ranks of Solon's supporters. Later, he created his own regional political group of diacrians.

In 560 BC, Peisistratus rode a cart into the Athenian agora, covered in wounds, and claimed that political opponents tried to kill him while he was riding in the field. At a popular meeting, Peisistratus offered to give him a squad of bodyguards. Ancient authors wrote that he buried himself in order to seize power later with the help of guards. Many modern historians accept this version, while others believe that the enemy attack on Peisistratus actually took place. Perhaps the ancient version was formed under Athenian democracy and proceeded from a negative attitude towards tyranny. Despite Solon's opposition, the resolution was passed.

Peisistratus was given a squad of bodyguards armed with clubs. The size of the squad varies in sources: from 50 to 300 people. Soon, with their help, Peisistratus occupied the Acropolis without hindrance and became a tyrant. Probably, he became a tyrant with the sanction of the people, that is, he came to power quite legitimately. The mainstay of his power was not the bludgeon squad, but the demos ' sanction. Peisistratus ' guards were no match for the Hoplite militia, and if the people did not want tyranny, Peisistratus would have been deposed immediately after seizing power. In addition to having an important religious and symbolic significance, the Acropolis once housed the palace of the Mycenaean kings.

When tyranny was established, Solon tried to persuade his fellow citizens to oppose Peisistratus, but was unsuccessful. In a letter to Solon, Peisistratus tried to calm the former's anger and even invited him to return from exile, promising protection. The reaction of the aristocracy to the establishment of the tyranny of Peisistratus is unknown. The aristocratic leaders Megacles and Lycurgus, apparently, were not yet greatly alarmed by this and remained in polis. Then they joined forces and together drove the tyrant out of Athens. Apparently, Peisistratus was allowed to stay in Bravrona, in the territory of the Athenian polis. 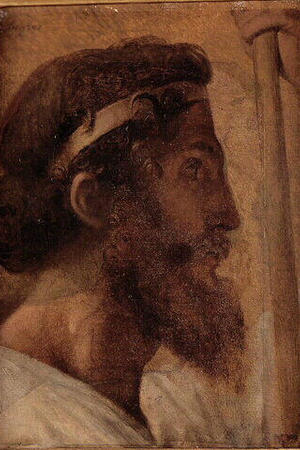 After some time, disputes broke out between the Paralii and the Pediii, and Megacles turned to Peisistratus for help. They agreed that Megacles would facilitate the return of Peisistratus to power, and the latter would marry the former's daughter Kesira. Megacles probably expected Peisistratus to be an obedient tool in his hands.

For the return of Peisistratus, Megacles found a certain woman of high stature and majestic appearance named Phia (who later became the wife of Peisistratus ' son Hipparchus); he dressed her in armor, so that she was supposed to represent the goddess Athena, and accompanied her, as if under the protection of the goddess herself, Peisistratus solemnly entered the city. Herodotus considered this trick a stupid trick and wondered how the Athenians, who were reputed to be the most cunning of the Greeks and free from" stupid superstitions", could have succumbed to such a deception. Aristotle also found this strange. Some modern scholars believe that in reality this trick did not happen, while others believe that it was some kind of theatrical religious action. Probably, here the religious nature of the Greeks of the archaic era manifested itself, for which it was characteristic in some cases to perceive man as the incarnation of God. Therefore, religious Athenians could see in Phia, a tall, beautiful woman, the embodiment of Athena. Perhaps Peisistratus reproduced the ancient and authoritative religious and cultural model of the" sacred marriage " of the hero with the goddess, where Peisistratus himself was in the role of the hero (most likely, Hercules).

Peisistratus came to power a second time and married the daughter of Megacles. He already had adult sons to whom he wanted to transfer power, and therefore did not want to have offspring from a new spouse. It is also possible that Peisistratus did not want to tarnish himself by associating with a woman from a "defiled" family. According to Herodotus, he lived with Kesira in an "unnatural way". When Megacle found out about this, he considered himself dishonored and decided to take revenge. He reconciled with Lycurgus, and they planned to overthrow the tyrant again. Without waiting to be deposed, Peisistratus went into exile. His second tyranny did not last long — less than a year; Megacles and the Alcmeonids played an important role in the government of the state during this time. This time Peisistratus also had to leave the territory of the Athenian Polis. Perhaps the aristocrats who were hostile to him framed his exile as a kind of legal procedure, similar to later ostracism. In the Athenian agora, archaeologists found a potsherd similar to the ostracons, on which the name of Pisistratus is written. Modern researchers expressed several options: some believed that the inscription refers to the archon 669/668 BC. Others believed that it was the tyrant Peisistratus, and others believed that it was the grandson of the tyrant Peisistratus the Younger, who allegedly lived in Athens at the beginning of the fifth century BC.

The second exile of Pisistratus lasted ten years (556-546 BC). In exile, he carried out active activities aimed at returning to power. First, Peisistratus went to Eretria, then founded a settlement in Thrace, where he began to develop silver mines, and began to collect help from his allies. During the ten years of exile, he had accumulated a large sum of money and began to prepare for the campaign against Athens. With these funds, Peisistratus recruited a band of mercenaries and, in addition, received help from his allies: money was sent to him from Thebes; his supporter Lygdamides sailed from Naxos with money and men; a detachment of soldiers came from Argos, and in Eretria he was joined by noble horsemen.

In 546 BC, a detachment of Peisistratus landed in the area of Marathon. There, his supporters began to flock to him, especially the inhabitants of Diakria. He stayed there for a while, strengthening his position. The aristocracy in power was strangely passive, apparently unsure of demos ' support. When news came to Athens that Peisistratus was marching on the city, a detachment of Athenians marched out to meet him. Both forces met at the town of Pallenida, where the sanctuary of Athena was located. There Peisistratus received a favorable prediction and moved to attack. At this time, the Athenians were resting after breakfast: some were sleeping, while others were playing dice. The attack caught them off guard and they began to run. Peisistratus, in order to prevent them from gathering again, sent his sons after them on horseback, who urged them not to be afraid and to go home. The Athenians obeyed and dispersed. In this story, transmitted in the sources, there is a certain mockery of the peasants over the pampered townspeople. The Athenian army consisted of nobles, and the people were on the side of Peisistratus. This story probably originated among the tyrant-friendly rural population. Peisistratus for the third time and finally seized the tyrannical power in Athens. 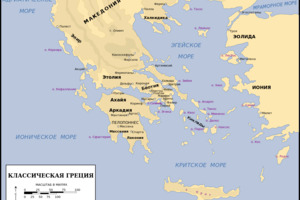 Map of Ancient Greece of the classical period

According to ancient sources, the first thing Peisistratus did was take care of his own safety. Herodotus wrote that he took hostage the children of his political opponents who had not managed to flee the country with the Alcmaonids, and sent them to Naxos to Lygdamides.

The Alkmaeonids, led by Megacles, went into exile. After them, many aristocrats, burdened by the tyrannical regime, left the Athenian polis. The remaining aristocrats in Athens cooperated with the tyrant. Peisistratus kept the laws of Solon in force and did not change anything in them. State authorities continued to operate. However, the tyrant recommended his supporters to the people for the position of archon. The power of Peisistratus was not legally established in any way. He ruled as a recognized charismatic leader. The ideological basis for his power was religion and the model of ancient royal power. The ancient kings (Basileis) had three main functions: military leadership, judging, and worship.

After the death of Pisistratus, Hippias inherited a tyrannical power. Hipparchus was the second person in the state, who was primarily responsible for cultural policy. Hegesistratus remained a vassal tyrant of Sigaeus. Jophon, apparently, died before his father, since there is no information about his activities.