Dorians and Ionians spread along the northern coast of the Mediterranean Sea, then they find themselves in the Black Sea.

However, the Greeks were not engaged in the discovery of new lands, but followed the already well-trodden paths of the Phoenicians, displacing their predecessors. In addition, they did not explore new lands in depth, limiting their presence to the coasts.

The political unity of Greece that existed in the Cretan-Mycenaean period was not restored. Many poleis that controlled their territories had a wide variety of ways of governing: tyranny, oligarchy (including timocracy), and democracy. 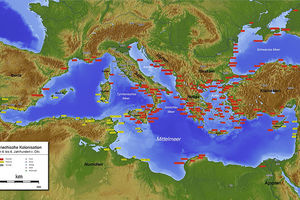 Conventionally, Greek colonization can be divided into two large periods — the large-scale movement of tribes in the Dark Ages caused by the Trojan War, and the subsequent colonization, which was carried out by already stable poleis, many of which were formed in the previous period.

The first state founded during the migration of the tribes was Thessaly, founded by the tribe of the same name. At the same time, the Aeolians and Dorians, as well as the Boeotians, were displaced. Those, in turn, went partly to the middle part of Greece, partly to the Peloponnese, while significantly pushing the Achaeans who lived there, the heirs of Mycenaean civilization, to the north. In turn, the Achaeans, who occupied new territories, drove out the Ionians, who began to push other tribes already in Attica, who were forced to move and colonize the Asia Minor territories. In addition, a number of islands in the Aegean Sea were developed. All these large-scale movements, among other things, led to large-scale political transformations. In many new poleis, the monarchy was replaced by a republic.

Further colonization was less spontaneous and usually involved purely pragmatic considerations of the inhabitants of the now stable city-states. At this stage, the main directions of colonization were identified: in the south, the colonizers sought to develop Italy and Sicily, and in the east, the main interest was represented by the shores of the Black Sea, which at that time was called the Euxine Pont.

Colonies were withdrawn primarily because of the lack of land in the poleis of continental Greece. In turn, this was due both to the growing population of the polis and to the existence of laws prohibiting the division of land ownership between several heirs.

In addition, a group of citizens who were dissatisfied with the rules of their polis and wanted to establish a new one that corresponded to their ideals could go to the foundation of a new colony.

At the same time, the change in the direction of colonization could also be related to the enmity between two coalitions of poleis during the Lelant War: Chalcis and Corinth, having pushed their opponents out of the arena of colonization in Sicily, contributed to the formation of a new direction of ancient Greek colonization — to the northeast, to the Sea of Marmara and the Black Sea. It is known that many early colonies in this direction were brought out precisely by the opponents of Chalcis and Corinth.

The new lands were colonized gradually — for example, before the establishment of tyranny there, Corinth first brought out several colonies along the shores of the Gulf of Corinth, then on the islands of the Ionian Sea, and only then founded Syracuse in Sicily. During the reign of the tyrants in Corinth, colonization policy was determined by strategic considerations: in addition to solving the traditional Greek problems of lack of land for processing and raw materials, the tyrants of Corinth set themselves the task of securing strategic dominance in the western direction. The exception to the wave of colonization was continental Sparta. The Spartans founded a single colony — Tarentum in southern Italy, but later chose to solve the problems common to all Greek poleis at that time (lack of land and overpopulation), by conquering new lands in the Peloponnese and changing the structure of their polis.

The main areas of Greek colonization were "Magna Graecia" (Southern Italy), Sicily, the Black Sea coast, the Eastern Mediterranean (Cyprus and the southern coast of Asia Minor), Cyrene, the mouth of the Nile in Egypt, and the northwestern part of the Mediterranean. These areas are grouped into three groups: western (the most active in terms of the number of colonies removed), north-eastern (the second most active), and south-eastern and southern. Sometimes it happened that colonists failed to establish a colony in the desired location, and they had to change not only the location, but also the region of the colony's withdrawal (for example, colonists from Eretria who failed to establish a colony in Kerkyra founded a colony in Thrace). In the case of enmity between metropolitan poleis, a less powerful polis could be forced to stop colonization even if there were prerequisites for it (for example, the Megarians for a long time were forced to limit themselves to removing only one colony due to the opposition of their opponents — Chalcis and Corinth). In the eighth and sixth centuries, polis that were themselves not so long ago colonies also participated in colonization, such as Miletus, which founded up to 90 colonies on the shores of the Black Sea. In addition, poleis developed during the Great Greek colonization period also participated in further colonization (for example, Akragant, founded by Gela and the colonies of Syracuse).

Divine sanction was required for any serious state enterprise, but it was especially necessary when establishing a new settlement. Residents of poleis who decided to establish a colony, as a rule, turned to the Delphic oracle, whose priests traditionally indicated the place of foundation of the future colony, or gave other (sometimes ambiguous) instructions. Thus, it is possible that the management of the direction of colonization (but not the colonization itself) was centralized.

Most of the colonists were usually impoverished and poor citizens, younger sons of families who were defeated in the political arena, as well as residents of other polis. Colonists who participated in the creation of a new colony were automatically granted land for cultivation and citizenship in the new polis. The organization of the colony's removal was carried out by the chosen person-an oikist. When the colony was founded, the fire of the sacred hearth and images of local gods were transported from the metropolis. The inhabitants of the colonies often maintained close ties with the mother country, even providing assistance if necessary. There was also a special type of colony — cleruchia, which were not at all a new independent polis, but were the possessions of the inhabitants of the polis outside its borders. Such was, for example, the colony of Athens on Salamis. Despite this, the colonies were initially derived as independent poleis, so when the interests of the mother country and the colony collided, both poleis could move from peaceful friendly and fraternal relations to open conflicts with each other, as for example happened between Corinth and Kerkyra.

The creation of numerous colonies encouraged the development of trade, to the extent that some colonies were specifically withdrawn to ensure the strategic dominance of the mother country in this area. The colonies exported grain (primarily from Magna Graecia and the Black Sea region) and copper (Cyprus) to the continental poleis, to a lesser extent — wine, that is, it was mainly raw materials. In turn, iron and iron products, as well as woolen fabrics, ceramics and other handicrafts were exported to the colonies. At first, Aegina was the leader in trade within the Greek colonies, whose inhabitants were skilled sailors, but soon it was pushed by Corinth and Chalcis, which, unlike Aegina, had a large number of colonies. Only after them, Athens took the lead in maritime trade.

Thanks to the colonies, the Greek poleis managed to eliminate the overpopulation of continental Greece, significantly increase the volume of trade and create the prerequisites for the dominance of Greek merchants in the Mediterranean, as well as expand the scope of Greek culture. It is believed that only during the colonization period, several hundred colonies were bred, the total population of which was 1.5-2 million people.