In the spring of 480 BC, a Persian army crossed the Hellespont Strait (present-day Hellespont). Dardanelles) from Asia to Europe. Xerxes personally led a new invasion of Hellas. The ruler of the Achaemenid Empire managed to gather huge forces for this purpose. Herodotus gives a fantastic figure: in the land army of Xerxes there were more than 5 million people. Most modern scientists are skeptical about this message. Some historians believe that Xerxes had no more than a few tens of thousands of soldiers at his disposal. But most likely, the truth is somewhere in the middle. It is more likely that the Persian army numbered several hundred thousand people. In any case, this contingent was much larger than what the Hellenes could put up.

Xerxes ' army was accompanied by a fleet of about 1,200 different ships. Moreover, the huge Persian fleet included not only Phoenician ships, but also ships of the Greek poleis of Asia Minor and nearby islands subject to the Achaemenids. By ordering his Greek subjects to provide military forces to participate in the campaign, the Persian ruler sought to test their loyalty to the Achaemenids.

After leading the warriors across the Hellespont via a specially constructed pontoon bridge, Xerxes then set off along the route Mardonius had previously taken, along the northern coast of the Aegean Sea. The fleet, accompanying the army, moved close to the shore. To avoid shipwreck while bypassing Cape Athos, the Persians dug a channel through the two-kilometer isthmus, along which the ships passed. The armies of Xerxes overran Thrace, Macedonia, and Greek Thessaly. The majority of Thessalian cities voluntarily surrendered to the Persians.

The time has come for the Greek poleis – members of the Hellenic Union-to immediately take up defensive positions. The original plan was to contain the onslaught of the Persians in the Tempe Gorge (in northern Thessaly). However, this plan had to be abandoned because of the pro-Persian position of the Thessalians. The Thermopylae Pass, which was a natural border between Northern and Central Greece, was chosen as a new location for the defensive line. Although the Spartans, in whose hands was the overall command of military operations, from the very beginning were inclined to hold the defense on the Isthmus Isthmus, closing the entrance to the Peloponnese. But in this case, Athens remained defenseless. Only at the insistence of the Athenians did Sparta agree to send a small allied force led by King Leonidas to Thermopylae. The squad consisted of about 7,000 people, including 300 spartiates, who made up its elite part. At the same time, the Greek fleet came out to meet the Persians, taking up positions near Thermopylae, at the northern tip of the island of Euboea.

The Battle of Thermopylae became one of the most glorious pages in the military history of Ancient Greece and remained in the memory of the people as the brightest example of selfless courage and heroism. Having built fortifications in a narrow gorge, the Greeks, under the command of the Spartan king Leonidas, repelled the blows of the Persian army that was many times superior to them for several days. Xerxes was ultimately successful only by trickery: one of the locals showed the Persians a secret path in the rocks that led around Thermopylae. The Persian detachment passed this way and was able to strike the defending Greeks from the rear. The defenders of the passage, due to the hopelessness of the situation, were forced to withdraw, except for the Spartans, who were forbidden to retreat by law. And all 300 Spartans, including Leonidas, fell in an unequal battle. 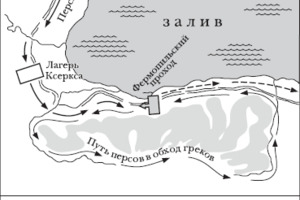 At the same time, a naval battle between the Greek and Persian fleets took place in the north of Euboea, near Cape Artemisius. Despite their numerical superiority, the Persians failed to gain the upper hand: neither side was able to win. This was already an important success for the Hellenes: first, the occupied positions were held, and secondly, the Athenian fleet created by Themistocles, which made up the most significant part of the allied Greek naval forces, was given a baptism of fire. However, when the fleet command received news of the defeat of the ground forces at Thermopylae, it was forced to retreat to new positions. Greek ships arrived at the island of Salamis, which became their base in the Saronic Gulf.

Now the Persians were on their way to the heart of Hellas. Boeotia went over to the victorious side, and Xerxes went to Attica, where his next victim was to be Athens. For a while, their residents fell into a state of panic, not knowing what to do. The people's assembly made all sorts of suggestions: either abandon everything and run as far as possible, or defend yourself on the Acropolis to the last and die honestly in the fight against the enemy. Only thanks to the organizational talent of Themistocles was it possible to stop the panic and urgently begin the evacuation of the city's population, as well as material values. The women and children were taken to the city of Troizen (in Argolis), and the men were transported by ship to the island of Salamis, to the fleet. The Council of the Areopagus also played an important role in the evacuation. Shortly before that, a decision was made to return all ostracized persons from exile ahead of schedule. So Aristides returned to his homeland, who, forgetting about his conflict with Themistocles, actively joined in the fight against the invaders.

The Persians took Athens, burned and destroyed the defenseless city, killed hundreds of old people who did not want to leave their native walls. Soon the Persian fleet also approached Athens. But there was a trap waiting for Xerxes: Themistocles managed to force a naval battle on the Persians in the strait between Salamis and Attica. At the end of September 480 BC, the famous Battle of Salamis took place, which became the culmination of all the Greco-Persian wars. Of the total number of the Greek fleet (380 ships under the command of the Spartan navarch Eurybiades), almost half was the Athenian squadron (180 ships), which was headed by Themistocles. Fearing defeat due to the numerical superiority of the enemy, Eurybiades initially wanted to avoid the battle and withdraw to the Isthmus, but Themistocles made every effort to ensure that the battle took place.

In the narrow strait, the Persian fleet was unable to use its advantage. Numerous bulky, unwieldy Persian ships, having lost control, huddled together. The more mobile and maneuverable Greek triremes crowded the enemy ships, boarded them and sank them with ramming blows. Persian sailors who tried to get out on land and escape were killed by Greek soldiers commanded by Aristides. The battle ended with a complete and unconditional victory for the Greeks, and the main contribution to this victory was undoubtedly made by the ships of the Athenian fleet.

After the defeat at Salamis, Xerxes was forced to return home with the remnants of his fleet. However, for the Athenians who returned to the ashes of their native city, the danger was not over yet: in Greece there was a fairly strong (several tens of thousands of people) land Persian army led by an experienced military commander Mardonius. Having made Boeotia their base, this army moved around Hellas, sowing destruction everywhere. The Persians even managed to retake Athens for a time, and later Mardonius intended to invade the Peloponnese. In 479 BC. The Greek poleis, members of the Hellenic Union, managed to gather a combined army comparable in size to the Persian one. The battle with the Persians took place in the south of Boeotia, near the town of Plataea, and was difficult for both sides. At the Battle of Plataea, the Greek phalanx under the Spartan general Pausanias again demonstrated its superiority, inflicting a final defeat on the Persian forces. Mardonius was killed, and the remnants of his army fled from Greece.

In parallel with the conduct of the land military campaign in the Balkan Peninsula, the forces of the Hellenic Union did not stop military operations at sea. The combined Greek fleet, commanded by the Spartan king Leotichides and the Athenian strategist Xanthippus, approached the coast of Asia Minor, where the Persians were preparing reserve forces in the area of Cape Mikale, capable of making a new invasion of Hellas if necessary. In the battle of Mycale, which took place simultaneously on land and at sea, these reserve forces of the Persians were destroyed. By the way, this battle took place on the same day as the Battle of Plataea, which was hardly a coincidence; most likely, the Greeks had a coordinated plan of action in all directions.

The battles of Plataea and Mycale ended the most important stage of the Greco-Persian wars. The victories won by the Greeks at this stage led to a radical change in the course of military operations. The strategic initiative passed to the Greeks. The Achaemenid claim to power over Greece was over.