Cleisthenes ' reforms were carried out shortly after the overthrow of the Pisistratid tyranny in Ancient Athens in the late sixth century BC. The very word "democracy" came about as a result of Cleisthenes ' reforms. Power passed to the "demos", which meant not" people " in the modern sense of the word, but full citizens, members of one of the territorial districts of the demes of Attica. The reforms undertaken by Cleisthenes in 508-507 BC. They were aimed at weakening the political influence of the aristocracy, which, while maintaining the previous order, would have retained its importance.

According toAccording to Aristotle, Cleisthenes created dema's territorial districts and gave them names. Modern scholars mostly believe that demes in the form of small towns and villages existed at the time Cleisthenes came to power, but did not play a significant role in the political and administrative development of Attica.

Dem can be represented as a micro-city. Each community had its own authorities, the assembly of demots. The head of the administration was a demarch, who was elected for one year. Local issues, such as the lease of dem land, the financing of public buildings and religious rites, were mostly discussed at Demot meetings. The system of demos represented essentially the presence of homogeneous groups of the population who live in the neighborhood and solve common problems together.

Cleisthenes finalized the issue of Athenian citizenship. Only a member of the Democratic Party could be a full citizen. It was the dem who was responsible for co-opting new citizens by accepting them into their lists after the demots voted. Several generations could live in Athens in the status of meteks, without having civil rights. According to the reform, the patronymic was replaced with the name of the dema. This requirement was not fully implemented. Later, when officially naming both methods, for example, "Pericles, son of Xanthippus, Holargian" was combined. A citizen could live in any of the demes, buy houses, but at the same time he continued to be listed in the one to which his ancestors belonged at the time of "registration" during the reform of Cleisthenes. Anyone living in a foreign deme had to pay a special tax.

Attica was divided into three regions — urban, coastal and central. Each of the areas was divided into 10 tritties (1½-2 square miles in size) from one or more demes. Three, located at a distance of trittia from various regions, made up philae. Each of the philae and trittiae were comparable in population. A special feature of the reform was the random distribution of tritium among filaments. The fila consisted of randomly arranged urban, coastal, and inland demos. The meaning of the innovation was that regional interests in Philae could not prevail over national ones. Athens, which was also divided into demes, ceased to exist as a city-state. From a political point of view, Athens "dissolved" into Attica, or, according to the figurative expression of R. Osborne, "expanded its borders" to the state limits. At the same time, the city became a political center. Representatives of the demes of the same philae located in various parts of Attica were supposed to meet in one place that was most suitable for everyone to solve common issues. Athens naturally became such a city.

The new 10 philae were named after Attic mythological characters, whose names were chosen by the pythia. Thus, the reform was carried out as if with the knowledge and support of the gods. 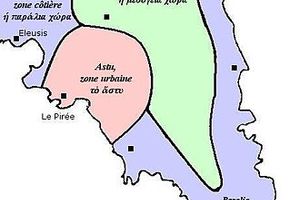 According to Solon's reforms, there was a state council of Bule in Athens. It consisted of 400 people. Bule's function was to draft pro-bulevm bills, which were to be approved by the People's Assembly. Cleisthenes increased the number of Boule to 500. The reform was not limited to changing the number of council members. The Council of five hundred was elected from each dem. The quota of each of the ten fil was 50 people. Members of the Council were elected by annual drawing of lots among democrats. Each Dem represented a certain number of people in the legislature. Since this state body consisted of representatives of the entire demos of Attica, elected by random drawing of lots, the Bule reflected the prevailing opinions and political trends among the people.

As part of the Bule, each of the philae received a pritania by lot. Her duties included the convocation and conduct of the National Assembly, international negotiations, the reception of ambassadors, the calculation of revenues to the treasury, etc. After the reporting report, the next 50 Booleans from another philae took over the task. The remaining 450 Bule members met as needed. Each of the parishes performed its functions for 35 or 36 days.

An important part of the reform was not only the organization of work of state institutions, but also the procedure for selecting members of the Bule. The drawing of lots, according to which any Athenian could become a member of the legislative body, both an aristocrat-Eupatrid and an ordinary full-fledged democrat, excluded the very possibility of election-related feuds.

The role of the People's Assembly has also increased. The court also moved from the "aristocratic" Areopagus to the people. 600 people were drawn from each fila to the Heliae People's Court by drawing lots.

To prevent the threat to democracy from prominent individuals who could threaten the power of the demos, but did not violate the law in any way, an ostracism procedure was introduced. The ostracized man was forced to leave Attica for ten years. At the same time, he retained all his property and civil rights, which were returned after this period.

Cleisthenes ' reforms were one of the key stages in the development of Ancient Athens. A democracy was formed in the country, the foundation of which was laid by Solon in the 590s BC. e. demos began to actively participate in political life, and the reforms themselves contributed to the emergence of politicians from the people.

The reforms carried out by Cleisthenes significantly reduced the political influence of the aristocratic families-phratries.