A notable phenomenon in the history of archaic Greece is tyranny. The terms "tyrant" and" tyranny " are formed on the linguistic basis of the Lydian language. In essence, in the polis city, power was seized by the usurper, who in his political activities ignored the laws and the will of traditional institutions, such as the council, the people's Assembly, etc. The socio-political crisis that many cities of Asia Minor — Miletus, Ephesus, the cities of the Aegean region — Lesbos, Chios, Samos, influential polis — Megara, Corinth, Athens, Syracuse, etc. - went through ended with the establishment of a regime of personal power. The methods of tyrant rule were characterized by populism, a policy of flirting with the demos through popular attitudes against the luxury of the rich, demagogic intercession for the rights of the poor, and demonstrative sections of confiscated land...Often, tyranny was the easiest way to resolve a conflict with one's political opponents. The defeated were expelled, the treasury was replenished with their property. As a result, real politics has filled the term "tyranny" with content and given it the negative connotation that we find in later historians. The main goal of tyranny-the weakening of the ancestral aristocracy-was realized by such famous rulers as Polycrates, Kypselos, Periander and others. The Samian tyrant Polycrates (second half of the VI century BC), relying on the craft and trade layers, launched a broad social program that ended with the creation of a powerful fleet and a developed system of building the polis.During the reign of the tyrant Polycrates, a water supply system was built in Samos with a unique system for its time and the scale of underground structures, an earthen pier in the sea (360 m long), a magnificent and famous Samos temple. Among the advantages of the short period of tyranny of Polycrates is his active unifying policy towards the island states of the Aegean Sea, an attempt to break into the Black Sea region. Tyrant is credited with patronizing the fine arts, poetry (such high attention was paid to the famous poets Anacreon and Ivik). The policy on the island of Samos was famous for its vigorous trade and foreign economic policy, which led to a gradual response from the surrounding states. According to legend, even the Egyptians were envious of the tyrant's power and prosperous polis. And the short-lived period of Polycrates ' rule ended with the intervention of the Persians interested in these territories, as if called by history to emphasize the weakness and transition period of this political form of government. The Corinthian demos supported the tyrant Kypselos in the middle of the seventh century BC. The Bakhiad family was expelled by him, and the lands and property of the defeated were divided. Periander, his son and successor (627-585), left a significant mark on the development of Corinth. 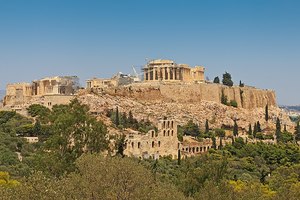 As a result of the reforms, a powerful state was created, whose territory stretched from the islands of the Ionian Sea to the Adriatic. In order to improve commodity-money circulation and trade, the monetary system was replaced, and channels were dug. Strengthening the authority of farmers, Periander strengthened their position in the representative power, formed a new council. It was he who raised the agricultural cult of the god Dionysus to the national level. Public buildings are being built in the city itself, and the arts are being encouraged. During this period, the famous Corinthian vases are created. Socially, the Corinthian tyrant followed the path of ousting the aristocracy and encouraging small and medium-sized democratic strata. So there were territorial fils, the number of slaves is limited. The tyrant of Corinth, Periander, was the son of Kypselos and Cratenda. Like his time, he was a controversial and complex character. Its laws were directed against flight from the country, idleness and luxury. Ancient tradition included him among the "Seven Wise Men". He is credited with saying: "Management is everything." Under Periander, Corinth brought colonies to the Adriatic, and Potidaea was founded on Chalkidiki.In general, the fragility of the social base led the Corinthian regime of tyranny to fall, which followed the death of Periander. Tyranny was the result of internal political struggles, and therefore there are costs associated with this phenomenon. Tyranny raised the authority of the individual, but, being a forced political step during the crisis, soon ceased to meet social conditions. The persistence of tyranny in Sycyon, Corinth, and Athens was explained by its pro-people character and strict adherence to the laws of the polis. In Athens, the tyranny began with a broad movement of the poorest part of the Athenian peasantry. At the head of the demos as a leader (Institute of prostates) was Pisistratus. He captured the Acropolis of Athens and, consequently, power in 562 BC. e. As a mandatory episode in this uprising, the guard (of 300 people) appears. Support for demos during the period of the tyranny of Peisistratus was carried out very widely: to ensure public works, cities were improved — the construction of water pipes and fountains, the construction of new temples, port facilities, porticos on the agora, the main life center of the early Greek city. Poleis in Ancient Greece almost all passed through the stage of tyranny, and the manifestations of the system were quite diverse. The emergence of tyranny was also inevitable in the oligarchic poleis. The oligarchy was opposed by the inferiors. In the Leontines, the oligarchy in the seventh century BC. it was overthrown under the leadership of Panetius. In Eretria, there is a demos group headed by Diag-rom. Oligarchic poleis were forced to pass laws against the concentration of power in the hands of a small circle of officials, close relatives, and long-term occupation of office. There is evidence of one of these laws, which was passed in the second half of the seventh century BC in Dreros and concerned the occupation of the post of cosmas. In the weak agrarian regions, tyranny did not develop. This is the prerogative of industrial-trade-oriented policies, where trade and economic factors generated large material wealth and individuals who advocated the redistribution of power functions. A vivid example is provided by pre-Colon Athens, where the destabilizing moment of new people's participation in the political struggle was particularly evident. The Aristotelian model of ideal tyranny provided for the modest lifestyle of the head of the regime and the presence of intermediaries-aisymnets, chosen by the people. However, there were contradictions in the practice of well-known tyrants that led to the fall of the tyranny. Thucydides ' positions on the question of tyranny conveyed a skeptical view of the general consequences of tyranny in the Hellenic states. Despite the concrete facts, the historian draws a general conclusion about the unworthy goals of tyrants, who reduced the good of the people only to their own well-being and the security of their position.

That is why, when we look at the mainstays of these regimes, we find that the tyrant-demos relationship was built with the active participation of the mercenary guard. Hired bodyguards or freed slaves guarded the tyrant's outpost, usually located on the acropolis. Herodotus ' testimony that the Delphic oracle responded to Kipsel confirms the fragility and fragility of the concentration of power in the hands of sole rulers. They played their part, and the slaveholders took over. Having destroyed the domination of the ancestral nobility, ancient Greek society faced the need to introduce state institutions in the form of republican government or in the form of slave-owning democracy with the participation of free citizens. The second path, which brought the most influential slave owners to power, was the slave-owning oligarchy. Like the biographies of tyrants in general, information about Kypsel and Periander is inspired by oral stories, stories transmitted by Herodotus, By Aristotle etc.D. The dating of the Corinthian tyranny is still debatable. Traditionally, the time of the reign of Kipsel is considered to be 657-627 BC. e. the birth was preceded by oracle predictions, which stated that later the child, becoming an adult, would deprive the ruling Bakhiad dynasty of power at that time, after which the rulers ordered to kill the baby.

However, the messengers sent for this purpose succumbed to their feelings and were unable to fulfill their mission. The next time, the mother saved her son, managing to hide him from the aliens, so that in the end the prediction came true and the grown-up Kipsel finally came to power in Corinth after a series of dramatic events.Strabo mentions a golden statue of Zeus brought by Kypselos to the Olympic sanctuary. He also founded the treasury at Delphi, where then for a long time untold riches flowed. In this way, the tyrant showed concern for the divine sanctification of his actions and decisions, since from this moment the Delphic oracle became especially favorable to him. The biography of Kipsel, which has come down to us in the works of ancient authors, has a plot similarity with other folklore works, for example, with the myths of Perseus or Oedipus. Folklore sources can also explain the very name of the Corinthian tyrant. According to legend, the mother hid her son in a vessel-kipsel. The fact that these myths were popular in Corinth and could indeed have influenced the legendary life of the tyrant there is indirectly confirmed by the images of these characters on the casket of Kypsel, where Perseus and the sons of Oedipus were made by the hands of Corinthian masters of the Kypselid era. There is also a hypothesis that Kipsel received the name in connection with some of his attitude to potters or to the pottery industry, which received great development in Corinth. In any case, archaeological studies have shown that kipsels were widespread among the Corinthians and were found both made of clay and wicker. Thus, based on the common origin of the tyrant's name, it is concluded that his democratic roots and that Kipsel himself came from the social base of the ancient Corinthian society. However, most researchers do not accept this explanation, pointing out that none of the ancient authors questioned the aristocratic origin of Kipsel. As for his legendary biography, this is, without a doubt, a fairy tale, in which it is not difficult to catch an echo of the traditional advice about the good and initially persecuted king, and in parallel there is a totemic line, as well as information about the initiation rite interspersed in the plot.