The period from the XI-IX centuries BC in the history of ancient Greece has two names: the Homeric period or the Period of the Dark Ages. These names are not chosen by chance. It is called Homeric because Homer's poems "Iliad" and "Odyssey" are the only historical source for studying this historical period. The period of the Dark Ages is called in connection with the economic and cultural decline in Greece at this time.

The oldest known historical monuments of ancient Greek literature are Homer's two poems, The Iliad and the Odyssey. The Greeks considered the author of the works to be a real historical person, but researchers question this, and it is precisely with these works that the appearance in the late 18th century is connected. the so-called "Homeric question", the main problem of which is connected with the origin of these poems. The founder of Homeric criticism was Abbot Francois de Aubignac (1604-1676). He wrote the work "Dissertation on the Iliad" (published in 1715), in which he expresses the idea that the Iliad is a combination of songs of different Aedic singers, and Homer himself did not exist. The abbot's point of view was developed by the German philologist F. A. Wolf (1759-1824), who was the first to study Homer's poems from a scientific point of view. It was he who, as a result of his research, raised the "Homeric question", which later caused a lot of discussion. In 1795, the philologist became the author of "Prolegomena (Introduction) to Homer". In his work, F. A. Wolf challenges the traditional idea of the unity of Homeric poems. In support of his point of view, the author cites 3 arguments::

1. individual inserts and contradictions in poems

2. ancient authors attribute the first record of the poems to the time of Peisistratus (VI century BC), and this is several centuries later than the events described in the poems

3. the development of writing among the Greeks, which the philologist refers to the VII-VI centuries BC.

The German scientist considers it impossible to create such voluminous poems in a non-written time. In his opinion, "The Odyssey" and "The Iliad" are a collection of separate songs collected together under Peisistratus. F. A. Wolf does not deny the integrity and unity of the poems, but believes that their unity lies in the material itself, in the myth and cannot belong to only one author. The philologist considers it possible that most of the songs in the poems belong to one author, whom he calls Homer. After the work of F. A. Wolf, a dispute arose among scientists, which split philologists into two camps: analysts and unitarians. 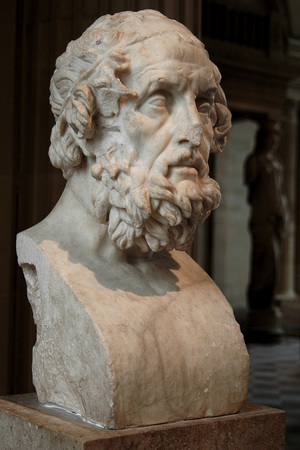 The founder of this direction is G. V. Nich "Studies on the history of Homer" (1830-1837) and "Poetry of legends among the Greeks" (1852). In his works, he argued that the compositional contradictions between individual parts, allegedly testifying in favor of the collective authorship of poems, are inherent in any work of fiction, and besides, in Homer they are so insignificant that they do not violate the artistic unity of the works. In addition, G. V. Nich argues that the use of writing is not a necessary condition for creating such poems. And the letter itself appeared among the Greeks earlier than F. A. Wolf believes.

THE MODERN STATE OF THE "HOMERIC QUESTION" AND POSSIBLE SOLUTIONS

Summing up the above, we can conclude that the specific history of the composition of the Homeric epic remains controversial. 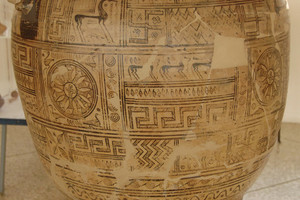 Vessel in geometric style 900-850 BC Archaeological Museum of Argos. Greece 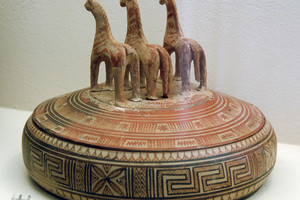 Piccida in the geometric style of the XI-IX centuries BC Archaeological Museum of Ceramics. Athens 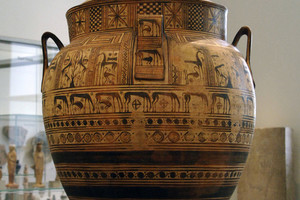 The evidence of the Homeric epic is significantly supplemented by archeology. Necropolises provide the bulk of archaeological material. The largest of them are located in Athens, Euboea, Salamis Island, in the vicinity of Argos. The number of settlements in the XI-IX centuries BC is small. After the Dorian conquest, Greece fell into a pre-civilizational stage of development, but it was the arrival of the Dorians that contributed to the formation of the Greek nation. And it was also during the Dark Ages that numerous separate communities were formed, on the basis of which the Greek poleis would later appear.

The economy of this period was primitive. The population was mainly engaged in agriculture and cattle breeding. Due to the Dorian conquest, trade relations with the Middle East and other Mediterranean states were interrupted. Many crafts were forgotten, writing was absent (archaeologists could not find any inscriptions on the territory of Greece that could be attributed to the period from the XI to IX centuries BC), commodity-money relations were also absent, exchange prevailed. The population lived in small rural settlements or "proto-towns" like Smyrna. Palaces or stone fortresses were not built as in the Mycenaean period. The buildings were mostly made of unfired bricks or simply wooden. Therefore, none of them has been preserved. If we talk about household items, they were simple and modest. The inventory found in necropolises usually consists of several clay pots, arrowheads and spears, bronze or iron swords in men's graves. In the women's rooms, in turn, cheap jewelry was found. There are no luxury items and foreign-origin items that are so common in Mycenaean tombs. However, it was in the Homeric era that the Greeks mastered iron. Before the arrival of the Dorians, the Achaeans lived in the Bronze Age, and the Dorians who came to these territories brought iron with them, thereby forming the economic basis for the future developed Greek civilization. The widespread introduction of the new metal was a kind of technical revolution of that time. Iron deposits in nature are much more common than the components of bronze-copper and tin. Thanks to this, iron was cheaper, and therefore more affordable. The creation of new iron tools allowed to increase the level of handicraft and agricultural production. In addition, thanks to iron, pottery and blacksmithing developed. Ceramic products of geometric style appeared. Thanks to the widespread use of iron tools, the prerequisites were formed for small peasant farms to become the basis of the future Greek economy.

If we talk about the social structure of Homeric society, then it is based on the tribal division. Philae and phratries were the main units of tribal society. Each phratry included several genera. And several phratries made up the philae. There were tribal feuds, blood feuds. Over time, the clan and tribe lose their importance and an increasing part of the population begins to live in small families and run their own economy. Soon the blood feud disappears. Social inequality is emerging:

1. Know. According to Homer, the Basileae are the most powerful and influential members of the aristocracy. Later ancient authors called kings basileus.

2. Free population: Peasants-community members and artisans, carried out duties in favor of the nobility and lived at the expense of their own farms.

4. Slaves. The issue of slavery in this period is debatable, since the form of slavery is unknown, whether it was classical or patriarchal.

Now we should turn to the consideration of the state administration system and the political system. Basileus (other Greek: βᾰσῐλεύς-king). He had a large number of powers: a military commander, a judge, a community administrator, a speaker at the people's assembly. Over time, his power is inherited. Council of nobles. Advisory body of the Basileums. People's Assembly. An advisory body that meets to discuss important public issues. Only men participated in this meeting.

The political system of the Homeric period is another controversial issue of this period. Some scholars call such a system of state administration a military democracy, while others, on the contrary, argue that the People's Assembly did not have a permanent regular basis and mandatory execution of its decisions. All decisions were made one way or another equally by the basileis.

Concluding the conversation about the Homeric era, it should be said that the XI-IX centuries BC are a time of decline and cultural stagnation, but it is during this period of time that the new and old struggle is taking place, customs and tribal system are changing, the technical base is being updated, that is, the spread of iron and its introduction into production. All of the above has prepared the transition of the Greek poleis to a new path of historical development, and in a few centuries Greece will achieve unprecedented cultural and social progress.