The Aequi (Latin: Aequi) were an ancient Italian mountain tribe that inhabited the Tholene and Upper Anien valleys and the western shore of Lake Fucin between the Sabine, Latin, Martian, and Guernican regions. In the 5th and 4th centuries BC, the Aequians, and quite often in alliance with the Volscians, waged continuous wars with the Romans. In 304 BC, their territory was conquered, with the Romans taking 41 cities. Among the more significant cities mentioned are Carsioli and Alba Fucentia (later annexed to the region of Mars). A small part of the Ekw region was known as Lat. Aequiculani (from Latin. - "small aequas") and was politically considered a municipality. The question of the tribal origin of the Aequi is considered controversial: some see them as a tribe related to the Volscians, others consider them to be Oscans. 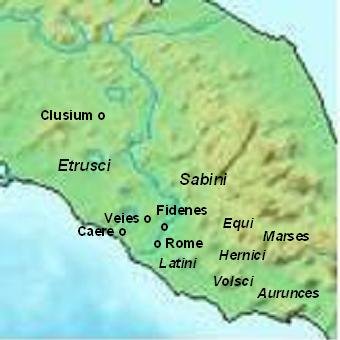 Wars with the Equs

Parallel to the wars with Veii, Rome continued to clash with the Volscians, Equi, and Sabines. These were small border wars, highly inflated by tradition. Thanks to the triple alliance, Rome and the Latins achieved some success against these peoples.

Among the many legends preserved by tradition, the story of Cincinnatus became world famous. According to Livy, in 458 BC, during a severe war with the Equi and Sabines, L. Quinctius Cincinnatus was appointed dictator.

"The following," says Livy, " must be heard by those who despise all human goods except wealth "(III, 26). The Senate's ambassadors found the dictator on a plot of land 4 yugera long, which he was cultivating with his own hands. Brushing off the dust and perspiration, and putting on the toga that his wife had brought him, Cincinnatus listened to the ambassadors. He immediately went to Rome, defeated the enemy, and on the 16th day, having laid down the dictatorship, returned to his own field. This tradition, perhaps legendary, is interesting as an example of the ancient Roman simplicity of morals.

The results of the foreign policy of the 5th century BC, which began in such an unfavorable situation for Rome, were very great: Rome destroyed its main enemy in Southern Etruria and significantly increased its territory; thanks to the alliance with the Latins and Guernicians, it managed to stop the onslaught from the east and even go on the offensive here; most importantly, Rome, whose territory was now a relatively large and continuous piece, gained a significant strategic advantage over its allies, whose possessions were scattered. This advantage was felt immediately after the elimination of the Gallic pogrom.