Latins (Latin: Latini) — a people of the Italian group (Italics), whose language (Latin) was closely related to Faliscan and Sicilian, and more distantly — to Sabine, Umbrian and Oscan languages. They served as the basis for the formation of the Roman people and the Romanic peoples in the course of Romanization. The historical area of residence is Latium. 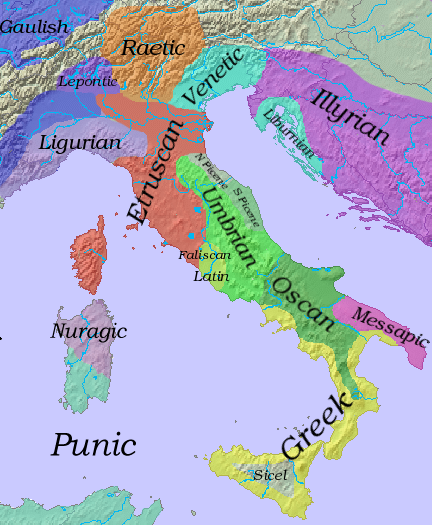 They appeared on the Apennine Peninsula at the beginning of the 2nd millennium BC on the territory of the settlement of the Ligurians and gradually occupied the area of Central Italy, between the Tiber and Liris rivers (now Liri), which received the name Latium (now Lazio) from their name.

Scientists of the 19th and 20th centuries [l. Pigorini (Italy), W. Gelbig (Germany) The Latins were considered to be carriers of archaeological cultures of the Bronze and Early Iron Age, which came from the north through the Alps. The Russian scientist V. I. Modestov singled out Protolatins in the first large wave of Italians who created the Terramar culture. The twentieth-century Italian scientist M. Pallotino argued that the Latins did not simultaneously, but gradually, along with other Italians, penetrated in small groups across the Adriatic to Italy, where they separated themselves from the rest of the newcomers. 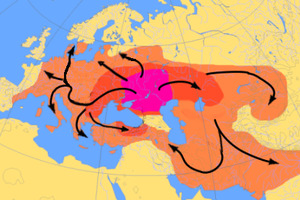 On the territory of Latium in the Alban Mountains, in Rome and other places, the cremation rite with rather poor burial equipment of the Bronze Age and rounded huts, as a variant of the Villanova culture, are recorded. The Latins were engaged in agriculture and shepherding, lived in conditions of decomposition of the primitive system. They also began to build fortifications for 30 primitive cities, which united at the beginning of the 1st millennium BC in a Latin alliance led by Alba Longa.

The Latins worshipped the same gods - Jupiter, Juno, Diana, Mars, etc., had common festivals, gathered for general meetings. In the late 6th and early 5th centuries BC, the northern group of Latins, that is, the Arician Federation of 6 cities, headed by the city of Tusculum, was active. It acted against Rome in alliance with the Etruscans and waged the 1st Latin War (496-493 BC), which ended with the restoration of the alliance with the Romans on the basis of the equal Treaty of Cassius. In connection with the invasion of the Gauls (390) The Latin Alliance broke up again, but was re-established in 358 by a group of southern Latins.

The First Latin War was an armed conflict between Rome and the cities of the Latin Union in 499-496 BC.

The reason for the war was the dissatisfaction of the Latin communities with Rome's desire for undivided domination in the Latin Union. Moreover, many in Latium were dissatisfied with Rome's aggressive policies. It was also known that Tarquinius the Proud, the last Roman king who had been exiled from the city, had participated in the war ..

Around 501bc, the ruler of Tusculum, Octavius Mamilius, "induced thirty cities to conspire" in the Latin League. Presumably, it was after receiving news of this that the election of the first dictator was held. A couple of years later, around 499 BC, hostilities began: Fideni was besieged, and Crustumeria and Praeneste were subdued by Rome. Titus Livy writes of the events of this year that "the Latin War, which had been simmering for several years, could not be postponed any longer." Soon the battle of Lake Regil took place, which became the main battle of the war.

Tarquinius the Proud and at least one of his sons (Titus and possibly Sextus, who raped Lucretia) took part in the battle on the side of the Latins. Octavius Mamilius, Tarquinius ' son-in-law, commanded the Latin army. The Romans were commanded by the dictator Aulus Postumius Albus Regillenus.

At first, the Latins managed to push back the Romans, so that the latter soon began to retreat. However, the dictator ordered an elite cohort of his guards to monitor the preservation of the order and kill every fleeing Roman soldier. Later, the dictator ordered the horsemen to dismount and join the infantry, after which the Latins began to retreat. During the battle, the Romans took 6,000 prisoners.

All the warlords personally took part in the battle. Titus Ebucius Helva, the chief of the cavalry, met Octavius Mamilius in a battle, but was severely wounded and could not even hold a javelin in his hand, after which he was forced to leave the battlefield. A little later, Titus Herminius breaks through to Octavius Mamilius and kills him, but receives a fatal wound in the process. One of Tarquinius ' sons (probably Titus) was killed, and Tarquinius the Proud himself was wounded and forced to flee the battlefield. Marcus Valerius Publicola, brother of Publius Valerius Publicola, was also killed in the battle after he tried to kill Tarquinius ' son for the glory of his family, who had driven the Tarquins out of Rome.

Around 495 BC, the Volscians, preparing for war with the Romans, sent envoys to Latium with a proposal to conclude an alliance against Rome, but the Latins gave up the ambassadors to Rome, for which a new treaty was concluded with them,and 6,000 prisoners were returned. In gratitude to Rome, the Latins sent a golden crown to Jupiter Capitoline. 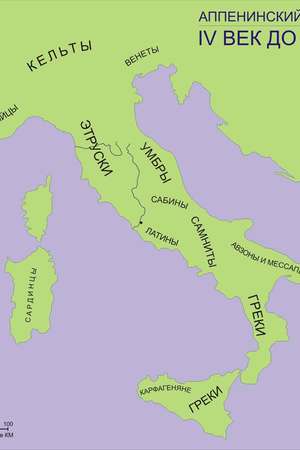 The Appenian Peninsula in the 4th century BC.

The Second Latin War was an armed conflict between the Roman Republic and the cities of the Latin Union in 340-338 BC.

The cause of the war was the dissatisfaction of the communities of the Latin Union with the conquering policy of Rome and their dependent position on the latter.

In 358 BC, Latin tribes sent soldiers to help Rome for the first time in a long time, fulfilling the terms of the Treaty of Cassius, concluded at the end of the First Latin War around 493 BC. However, already in 348 BC, at a meeting of representatives of the Latin tribes near the Ferentine Grove, the Latins, according to Livy, said::

"It is enough to command those whose help you need: with arms in hand, it is more convenient for the Latins to defend their freedom, and not an alien rule."

The second half of the 340s was spent waiting for a war with the Latin tribes. In 340 BC, ten elders of the Latin tribes were invited to Rome. After arriving in Rome, one of the ambassadors, Annius, took the floor and "spoke as if he were a conqueror who had seized the Capitol by force of arms, and not an ambassador protected by the right of nations." Annius, pointing out the regular military aid provided to Rome, demanded on behalf of the Latin tribes that the Latins be recognized as part of a single people with the Romans and a single state in which one of the two consuls would be elected from among the Latins. The consul Titus Manlius Imperiosus Torquatus, fearing that the senators would accept the Latins ' demands, flatly rejected their claims and called Jupiter as a witness, after which Annius, according to Livy, ran out of the curia, tripped, fell and lost consciousness. This was interpreted as the support of the gods, after which the Romans assembled an army and began a military campaign.

According to a legend preserved by Livy, shortly before the battle, the consuls had a prophetic dream, according to which the victory was to go to the army in which the commander "sacrificed the enemy's troops, and with them himself." After the divination of the haruspices, the consuls decided that for the sake of a common victory, the one whose first wing ranks (the Hastati) would begin to retreat to their second row (the principles) would commit suicide. A little later, the consul Torquatus, who was responsible for maintaining strict discipline in the Roman army, ordered the death of his son, who disobeyed orders and killed one of the Latins before the battle, while scouting.

The first to retreat were the Hastati of the left wing under Decius. Decius called to the pontiff and, under his direction, uttered the sacrificial words, after which he rushed into the center of the battle. Some time later, when the outcome of the battle was still unclear, Torquatus ordered fresh triarii to join the battle, thanks to which the Romans won a complete victory.

All Latin cities developed in the direction of polis, and the success of the Roman Polis in the 1st Samnite War (343-341) led the Latins, who were competing with Rome, to the 2nd Latin War (340-338), which ended with the formation of a Roman-Latin Federation under Roman rule. The Latins, having become Roman allies, retained self-government until the Julian Municipal Law (lex Julia municipalis, 2nd half of the 1st century BC), but lost their independence in foreign policy and were obliged to supply the Romans with soldiers. Otherwise, their situation was different: residents of a number of Latin cities (Tusculum, Praeneste) acquired full citizenship rights in Rome. But the inhabitants of other countries received only property rights there, but with the relocation to Rome - the full rights of Roman citizens (ius migrandi) and the ability to withdraw colonies together with Rome. This was Latin law (ius Latini nominis), which distinguished the Latins from the other allies of Rome and subsequently extended to non-Latins.

The Romans and Latins, influenced by the Etruscans and Greeks, developed a distinctive culture based on the Latin language. In the external and civil wars, the Latins, and especially their upper strata, supported Rome. After the Allied War (90-88 BC), the difference between the Latins and the Romans finally erased.