Etruscans (Latin Etrusci, Tusci, etc. - Greek τυρσηνοί, τυρρηνοί, self-name. Rasenna, Raśna) — an ancient civilization that inhabited the north-west of the Apennine Peninsula between the Arno and Tiber rivers in the first millennium BC. e. and created a developed culture, which later in the course of assimilation had a huge impact on both Roman culture and culture in antiquity as a whole. 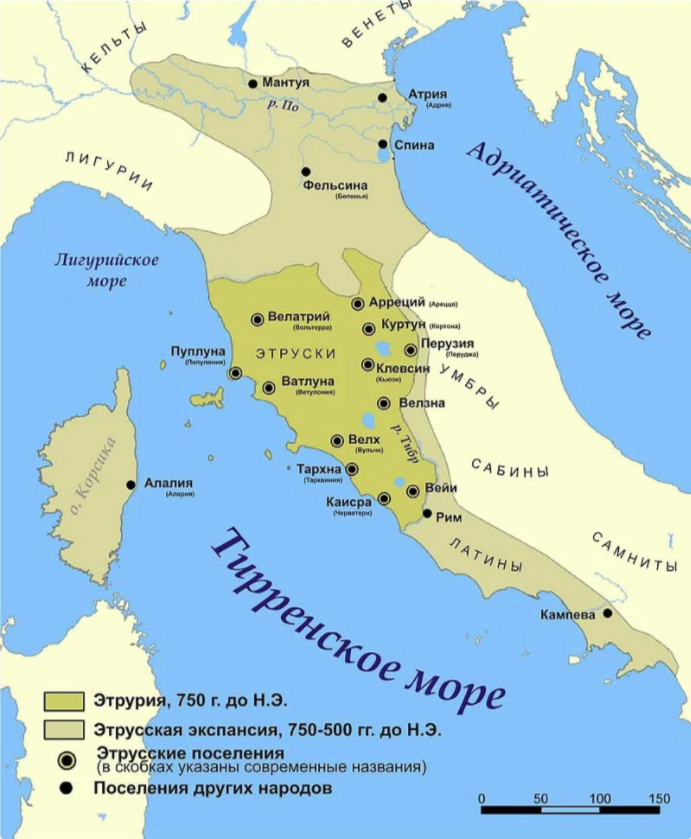 Origin of the Etruscans

There is no consensus on the origin of the Etruscans at the moment. Two versions are most common in the scientific community:

According to the autochthonous version of the origin of the Etruscans, their rise in the 8th century BC in Central and Northern Italy was a natural development of the previous Villanova culture. A similar theory was expounded in the 1st century BC by Dionysius of Halicarnassus, but the arguments given by him are questionable. Archaeological excavations show a continuity extending from the Villanova I culture through the Villanova II culture with the importation of Eastern Mediterranean and Greek goods to the period when the first evidence of Etruscan origin in Etruria appears. At the moment, the Villanova culture is no longer associated with the Etruscans, but with the Italians.

The second theory is supported by the works of Herodotus. He claimed Herodotus that the Etruscans were natives of Lydia, which is a region in Asia Minor-the Tyrrhenians or Tirsens, who were forced to leave their homeland due to a catastrophic crop failure and famine. According to Herodotus, this happened at the same time as the Trojan War. Hellenicus from the island of Lesbos mentioned a legend about the Pelasgians, who arrived in Italy and became known as the Tyrrhenians. Also at that time, the Mycenaean civilization collapsed and the Hittite empire fell, that is, the appearance of the Tyrrhenians should be dated to the 13th century BC or a little later. Perhaps this tradition is connected with the myth of the escape to the west of the Trojan hero Aeneas and the foundation of the Roman state, which was of great importance to the Etruscans. The hypothesis of Herodotus is confirmed by the data of genetic analysis, which confirms the relationship of the Etruscans with the inhabitants of the lands currently belonging to Turkey.

Until the mid-twentieth century, the "Lydian version" was heavily criticized, especially after the deciphering of the Lydian inscriptions — their language had nothing in common with Etruscan. However, there is also a version that the Etruscans should not be identified with the Lydians, but with the more ancient, pre-Indo-European population of western Asia Minor, known as the"proto-Luvians". With the Etruscans of this early period, A. Ehrman identified the legendary Tursha tribe, which lived in the eastern Mediterranean and made aggressive raids on Egypt (13-7 centuries BC).

Titus Livy gives a semi-mythical version of the northern origin of the Etruscans from the pre-Alpine tribes. The penetration of migrating northern tribes-carriers of the Protovillanova culture-into the Apennine Peninsula is accepted by most experts. In the framework of this hypothesis, the Etruscan Rasenae were related to the Alpine Rets, and in this case they can be considered as an autochthonous, pre-Indo-European population of Central Europe, which at different times absorbed alien cultural and ethnic elements from Sardinia and, possibly, Asia Minor.

According to A. I. Nemirovsky, the intermediate point of migration of the Etruscans from Asia Minor to Italy was Sardinia, where from the 15th century BC there was a very similar to the Etruscan, but unwritten culture of Nuraghi builders.

Based on the material of ancient sources and archaeological data, it can be concluded that the Etruscan ethnogenesis involved the most ancient elements of prehistoric Mediterranean unity during the beginning of the movement from East to West in 4-3 millennia BC and a wave of immigrants from the area of the Black and Caspian Seas in the 2nd millennium BC. During the formation of the Etruscan community, traces of Aegean and Aegean-Anatolian emigrants were found. This is confirmed by the results of excavations on the island of Lemnos (Aegean Sea), where inscriptions close to the grammatical structure of the Etruscan language were found. 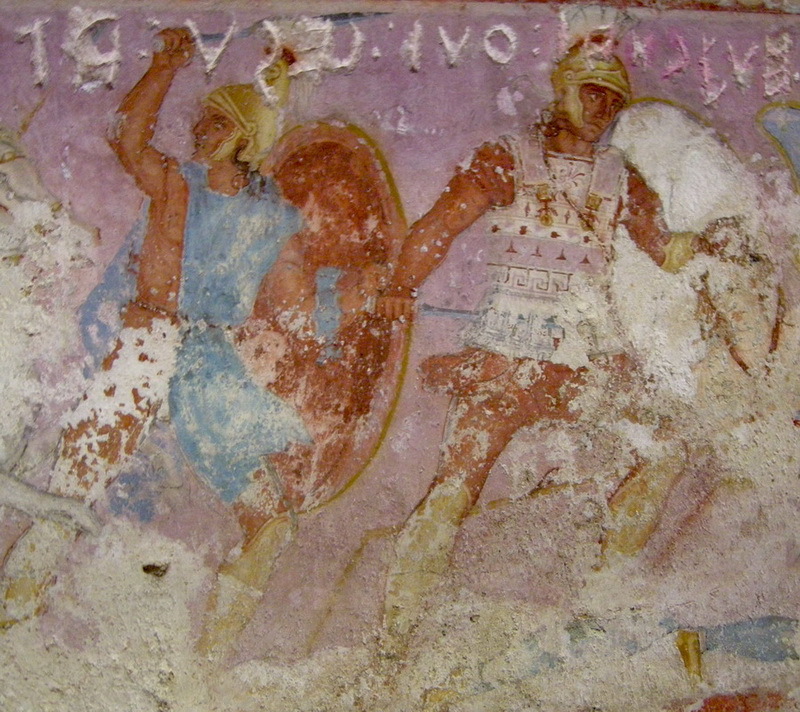 Sarcophagus of the Amazons with frescoes depicting Etruscan warriors. National Archaeological Museum, Florence. Around 360 BC.

With the conquest of the Veii and the seizure of their lands, the Romans gained a significant foothold in southern Etruria. Relying on it, they intended to continue their offensive against their neighbors. Building on their initial success, they captured Capena as early as 395 BC, and in the following year they also subdued Faleria, thus taking over not only the immediate possessions of the Vei, but also the area of their political influence. In 391 BC, the Romans first approached the Ciminus Forest, on the borders of the possessions of Clusium, Tarquinium and Volsinium. All of a sudden, all their original plans were mixed up in the most unexpected way.

At the same time as Rome's growing onslaught in the south, an even greater danger loomed over Etruria from the north. Having heard from merchants about the riches of Italy, the Gauls who lived beyond the Alps from the second half of the 5th century BC began to make predatory raids on its lands. Faced with the weak resistance of the local rich peoples, the Gauls moved from raids to full-scale conquests. Rome, represented by the Senate, sent an embassy to the Gauls in 390 BC, demanding that their leader Brennus leave the Etruscans alone. As a result, the Gauls broke camp and went straight to Rome, defeating his army, after which they sacked and burned the great city itself. After receiving a large ransom, they soon left Latium, but their detachments remained a constant source of military threat not only to Rome, but also to the whole of central Italy. 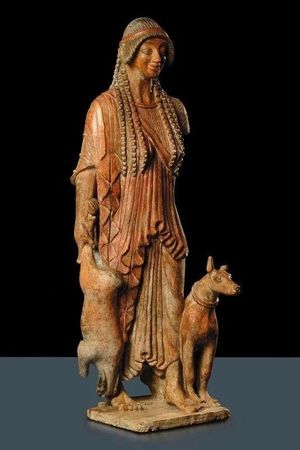 Etruscan sculpture of Diana, goddess of hunting. 5th century BC

After a thirty-year hiatus, in 358 BC, Etruscans from the Tarquinii, Volsinii, and Caere launched a joint raid on Roman territory. The Romans demanded reparations from them and sent an army to Etruria under the command of the Consul Gaius Fabius Ambustus, which the Tarquins defeated, and the captured 307 Romans they brought to their city and executed in the forum. This caused the whole of Etruria to revolt and declare war on Rome. Later, the Volscians joined them, opening a second front in the south, albeit unsuccessfully-the Romans won several victories over them. In 356 BC. The consul Marcus Fabius Ambustus, brother of the previously defeated Gaius, inflicted a series of defeats on the Tarquins and Falisci.

In 355 BC, the Etruscans attacked the Roman salt mines at the mouth of the Tiber, but were defeated by the troops of the dictator Gaius Marcius Rutilus. After that, the Romans themselves went on the offensive. The consul Gaius Sulpicius Peticus ravaged the Tarquinianian possessions, and the following year, Marcus Fabius Ambustus, who again became commander, defeated the Tarquinians in a general battle. The 358 noble youths he had captured were sent in chains to Rome, where they were also beheaded in the forum in retaliation for the murder of Roman prisoners.

In 353 BC, the inhabitants of Caere entered the war against Rome, but immediately capitulated at the sight of the Roman army. After that, the consul Titus Manlius Torquatus invaded the territory of the Falerii, destroying the crops in the fields and burning the villages. Neither the Tarquins nor the Falisci had the strength to fight anymore, and in 351 BC a 40-year peace treaty was concluded with them. 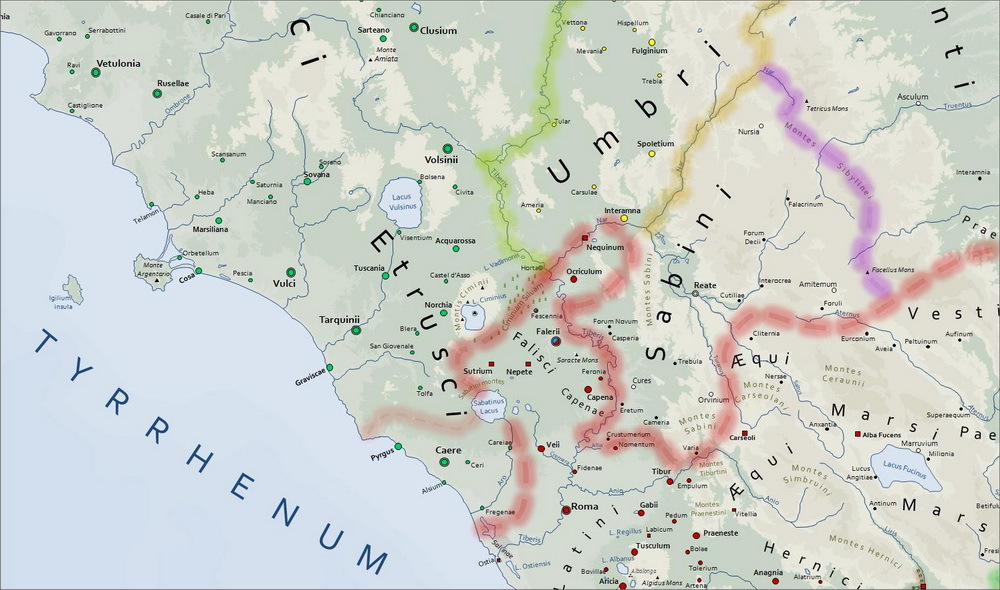 Roman possessions in the southern part of Etruria at the end of the IV century BC.

At the end of 40 years, the Etruscans decided to declare war on Rome again. They were mainly hoping to take advantage of the opportunity that had developed for them — the Romans at that time were involved in a major war against the Samnites. As in the last war of 389-386 BC, the Etruscans gathered a large army and laid siege to the border town of Sutria. The consul Quintus Aemilius Barbula came to the aid of the city, who gave battle under the walls of the city. Both sides suffered serious losses in it, as a result of which no other military operations were conducted until the end of the year.

In 310 BC, the Roman army was led by Quintus Fabius Maximus Rullianus. He formed an alliance with the Umbrians and plundered Volsinii territory, and at Sutria he defeated the newly assembled Etruscan allied army. Perusia and Cortona then withdrew from the coalition, concluding a separate peace with the Romans. The decisive battle of the war took place in 309 BC near Lake Vadimon in the land of Falisci, where Roman troops under the command of the dictator Lucius Papirius Cursor defeated the main forces of the Volsinians.

Livy wrote about the results of the battle:

"On this day, for the first time, the power of the Etruscans, who had been prosperous since ancient times, was crushed; they lost their best forces in the battle, and the camp was stormed and sacked on the same day." 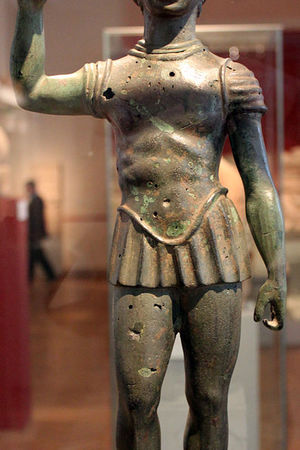 Etruscan statuette of a warrior of the IV century BC Antique collection, Berlin 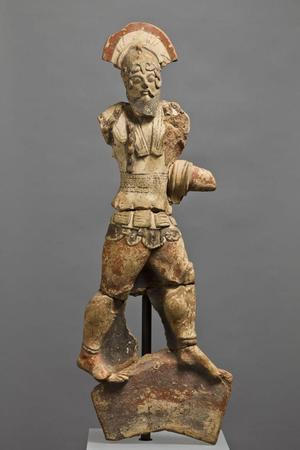 Figure of an Etruscan warrior. 4th century BC

The victory over the Volsinii finally consolidated Roman rule in Etruria. When the Tsilnii, who ruled the city, were expelled from Arretium in 302 BC, they turned to Rome for help, and not to another Etruscan city, as was customary earlier. The following year, the dictator Marcus Valerius Maximus brought the Cilnii back to Arretium and, without any noticeable resistance, re-established peace in Etruria.

Later, Etruria was completely assimilated by the Romans, as well as other Latin peoples. Nevertheless, the Etruscan civilization left a big mark on the Roman one: engineering, in particular the construction of arched arches of buildings, cement and other technologies. Also, many cultural aspects were adopted - gladiator fights , chariot races and many funerary rites are also of Etruscan origin. Also among the important cultural borrowings of the Romans from the Etruscans are the curule chair, togas for officials, as well as technologies of land reclamation and drainage of wetlands.