The electoral process in Ancient Rome

The earliest elections known to modern people were held in Ancient Greece, in the area of Attica, around the XI-IX centuries BC. Elections were an integral part of the ancient Greek polis, involving all free men, but the outcome depended more on the opinion of the aristocracy than on the outcome of the election. The results of the elections acquired the force of law under Pericles, during the golden age of Athens. The Roman Republic adopted the principle of holding elections from the Greeks and improved it, and this procedure was later used in the period of the Roman Empire and later in the Eastern Roman Empire for low-level elections.

At the beginning of the Roman Republic, according to the client-patron principle, a client, in exchange for protection and assistance from a patron, could vote for the latter in elections or encourage others to vote for their patron. However, later the Roman Senate legislated the principle of secret voting in the election of magistrates (civil and military dignitaries who were elected for a short period), and later in the discussion of cases of high treason. This principle has complicated the possibility of illegitimate coming to power, leveling the control over the votes of voters. According to the leges de ambitu, in order to maintain healthy competition, candidates were prohibited from bribing voters by holding free games, distributing money and bread. Any candidate who violated these rules was severely punished. As at present, the registration of candidates and the pre-election campaign began long before the voting day. A person who expressed a desire to run for a particular position had to notify the relevant magistrate in advance. The magistrate, in turn, had to check the candidate for compliance with the electoral legislation and put him on the voting list or refuse to do so. 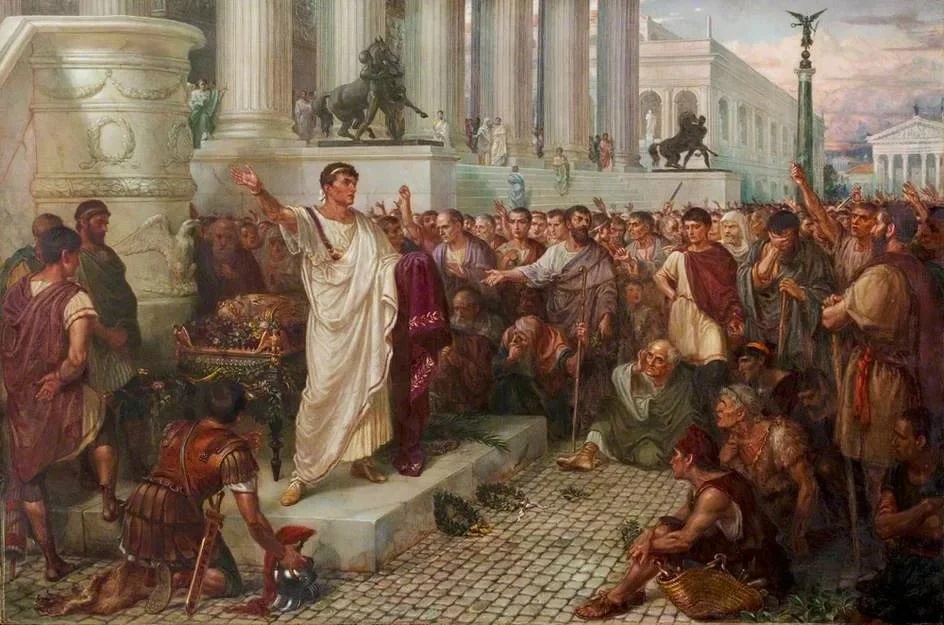 The day of registration of a candidate was considered the day of the beginning of the election campaign, which lasted until the voting day. To emphasize their status and stand out from the crowd, candidates dressed in snow-white togas-a symbol of a clear conscience. The Leges de ambitu allowed candidates to address the people in the bazaars and forums – the main squares of Roman cities. At meetings with the electorate, candidates behaved politely, addressed each voter by name and asked for support for their candidacy. Each candidate was accompanied by a slave-nomenclator, whose job it was to remember the name of each voter and suggest it to the candidate if the latter forgot this name. Traditionally, on the day of voting before the meeting of the comitia (a type of popular assembly in Ancient Rome), the senior magistrates determined the will of the gods by the flight and cry of birds, such a ritual was called auspicia. The augur observed the correct execution of the ritual he also decided whether the gods favored the election or not. If the augur saw bad omens, the election was postponed, and the comitia was dissolved, with good omens, the meeting of the comitia began. Meetings could only take place during the day; after dark, unfinished meetings were postponed to another day. After performing the auspices, the magistrates ordered the electorate to be called together and divided into centuries (according to the property qualification) or tribes (according to the electoral district). The order of voting was determined by drawing lots – a wooden or bronze tablet with inscribed letters or verses. Signs were placed in a special urn and mixed, and children or third parties were instructed to pull out one of them. The century that chose first was called centuria praerogativa. The results of her vote were perceived by all the other centuries as an expression of the will of the gods, which must be fulfilled. At the moment, two types of voting are known: open, which existed before the principle of secrecy of the vote was established, and directly secret. In an open vote, residents of Rome were directly asked if they were ready to support a particular candidate, and the responsible persons recorded all the votes "for"and " against". In such a situation, the patricians could easily influence the choice of voters, which they actively used.

Coin with the image of a voting citizen

During the secret ballot, initially the voters cast their votes using a kind of maze, or as the Romans called it saepta-a network of wooden partitions placed in such a way that the voter could not leave on his own. This structure excluded the possibility of repeated votes. Later, under Julius Caesar, marble columns were erected on the site of a dilapidated wooden labyrinth. The maze had many entrances where voters waited their turn. Voting began after the signal, and all centuries except the centuria praerogativa participated. The exact order of voting is unknown, but there is an assumption that before entering the fence, voters received a tablet on which they wrote themselves, or asked a proxy to write the names of two of their candidates, then the tablets were thrown into the ballot box, and the voters remained inside the maze until the end of voting. Elections were held not only in Rome itself, but in all the cities of the empire. As a rule, in Roman provincial cities, the government was made up of duumvirs – the highest officials, and decurions-members of the local senate. The quinquennals, who were elected every five years, compiled lists of citizens with an indication of the property qualification and formed the composition of the Senate. The day – to-day city duties (landscaping, bread supply, street cleaning, etc.) were assigned to junior aedile magistrates. Local government elections were held by dividing each city into several curia – electoral precincts.

All adults and free citizens could be elected to ordinary positions, but the requirements for candidates for higher provincial master's positions were higher: in addition to being of legal age and citizenship, they required an unblemished reputation, possession of certain property, and consistent promotion through the official ladder. Only former aediles could become candidates for duumvirs. The names of candidates were announced in advance by the duumvir or quinquennal holding the election. If there were not enough candidates, they were allowed to choose their deputies, who in turn could choose their assistants, and as a result, all these persons were included in the electoral lists. Just like in the capital elections, in the provinces, voters wrote their candidate's name on a tablet and threw it into the ballot box. Not only individual candidates could participate in the elections, but also urban societies such as youth unions, rural unions, or urban associations. Women also participated in the election campaign. The election procedure took place in March. The outcome of provincial elections was decided in a different way than in the capital. First, the results of voting in each curia were summed up separately, then the results from all curia were compared, and the candidate for whom the majority of curia voted won. The newly elected officials took office on the first of July and served for a year.

During the election campaign, propaganda inscriptions were applied to the walls of houses covered with white plaster and red paint. The candidate's name was written in large letters at the very beginning, an appeal to the voter was written under it, and the names of deputies were indicated in small print below. The inscriptions remained after the election for the entire duration of the elected officials ' tenure and were covered with a new layer of plaster during the next election campaign. The content of the campaign signs varied. Some of them described highly moral qualities of candidates, information about professional activity or noble origin. Less common are candidate commitments or programs. Archaeologists also found inscriptions that contained abuse against candidates, or caricatures of candidates, and some similar inscriptions showed attempts, apparently, by supporters of the candidate to erase negative statements. In addition, neutral inscriptions were found that simply encourage people to come to the polls. As an example, you can give the following labels: "Neighbors, wake up and vote for Ampliatus. May you get sick if you destroy it out of envy! ""Please, Lorey, choose Ceia Secunda as your duumvir and he will choose you" "If an honest life is good for people, then Lucretius Fronton is completely worthy of honor" 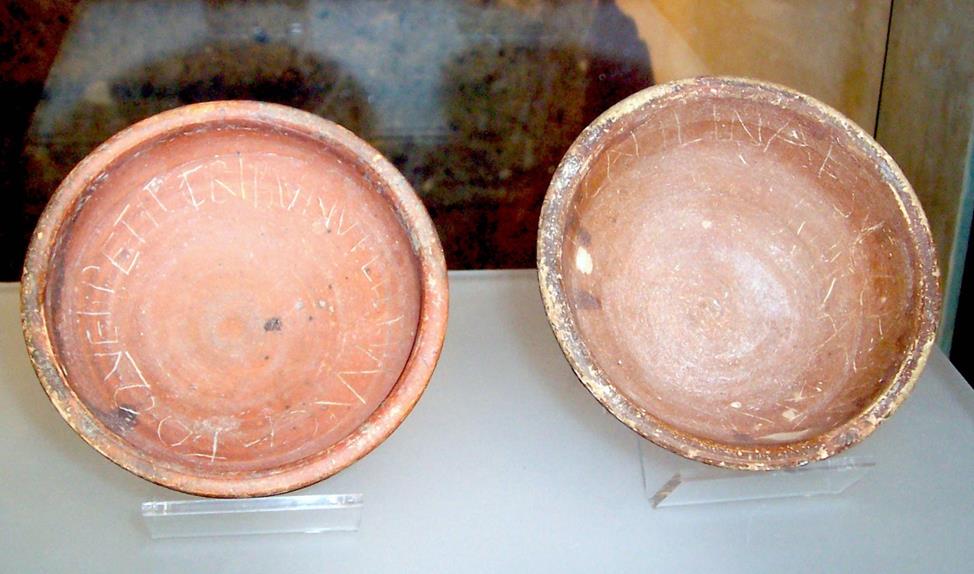 Campaign bowls. They were filled with food and distributed on the street before the election to the poor. Inscriptions inside the bowls contained calls to vote for a particular candidate. On the left is a bowl calling for voting for Cato the Younger in the election of tribunes of the people (63 BC); on the right, for Catiline in the election of consuls (66 BC).