The slinger or fustibalus (from Lat. funda-sling) - a lightly armed ancient warrior, leading a long-range battle at medium distance, the main weapon of which is a sling.

A sling is a flexible, rigid, or combined throwing military or hunting weapon. It is intended for throwing stones or specially made projectiles, usually made of lead. It is considered one of the progenitors of throwing machines.

The rope sling was most widely used in ancient times. It has an extended part in the center, where, as a rule, one projectile is inserted (an ordinary stone, ceramic or metal manufactured ball, etc.). One free end had a loop and was put on the hand or finger to fix the sling during the shot. The slinger held the free end of the sling with the same hand. Throwing, as a rule, took place in a loose formation, since the shot required a sharp spin of the sling and free space. To throw a projectile, the slinger rotated the sling with the projectile in a horizontal plane (usually above his head) to increase the range, accuracy and speed of the projectile, gradually increasing the circular movements, and at the moment of the strongest mach releases the free end of the sling. For shooting from a sling in a relatively dense formation, the Greeks and Romans could use a more compact vertical scheme of unwinding the sling. 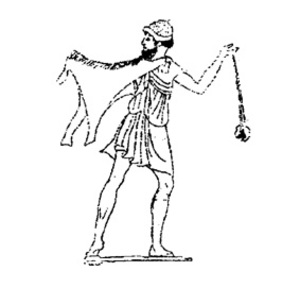 Image of a Greek slinger on a Greek amphora. Place of discovery: Nola. Length-slings: 69-70 cm. Projectile diameter: about 10 cm. Dating: 5th century BC 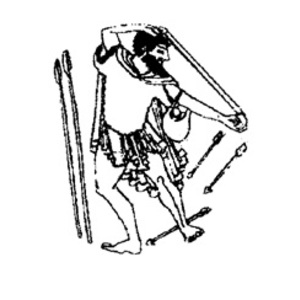 Image of a Greek slinger on a vessel. Sling length: about 97 cm. Diameter of the projectile in the bag: about 5 cm. 5th century BC 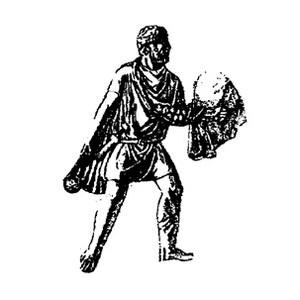 Image of a Roman army slinger on Trajan's column. Sling length: about 40 cm. Diameter of the projectile in the sling: about 7.5 cm. Early 2nd century AD

The sling was the simplest device for throwing stones. It was known to most peoples even before the ancient era, so it can not be called an outstanding invention of anyone. The sling was actively used in the armies of the ancient world (Egypt, Greece, Rome, etc.).

The effectiveness of the sling wasn't great, but it could be greatly improved by crafting special projectiles. In addition, the main value of the sling was its simplicity: the belt was not difficult to find or make, and stone ammunition cost almost nothing, so they could be easily made or even found on the battlefield. Anyone could become a slinger on the battlefield, regardless of their wealth. The poorest warriors, as a rule, were used in battles as skirmishers-slingers.

The stone for throwing was selected as smooth as possible (for aerodynamic performance) and round, weighing 200-400 grams. A projectile of this mass could be given sufficient kinetic energy to hit the enemy, which usually amounted to no more than 400 joules (for comparison: crossbow bolts in flight had a kinetic energy of 100 to 500 joules, arrows-usually no more than 300, a bullet from a Makarov pistol-320 joules. But it should be noted that with the same order of energy, such projectiles have a much smaller mass and volume). The throwing range was approximately up to 90 meters. Accuracy was usually problematic: it was extremely difficult to aim with a sling, and even an experienced slinger could not take into account all the individual features of the shape and weight of the projectile. 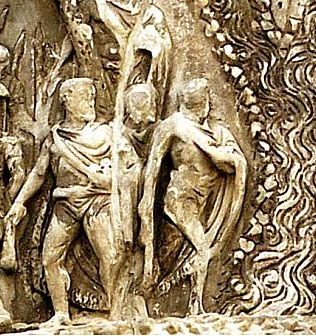 As an alternative to stone, a bullet made of baked clay was often used — entire warehouses of such projectiles were found in ancient ruins, as well as molds for their rapid manufacture. Clay balls had a lower density and flew worse than stones, but they were the same weight and shape, which positively affected the accuracy of shooting.

The sling acquired a different quality when using heavy bullets made of iron and especially lead. In this case, the range of its action was equalized with bows (lead bullets flew at a distance of 280 meters, iron bullets-up to 180 meters, and the killing power was extremely increased).

Such weapons were used by the troops of Assyria, Persia, Greece, Rome and Carthage. Despite the fact that the bow was a much more accurate weapon, slingers with metal shells were valued in some places above archers: heavy shells retained great killing power throughout the flight.

The idea of throwing lead projectiles from a sling came to naught with the decline of ancient civilization, since shooting such projectiles was too expensive (about 40 kilograms of lead were required for a hundred shots). Slingers were also expensive: it was more difficult to learn how to accurately throw slingshot projectiles than to learn how to shoot arrows. 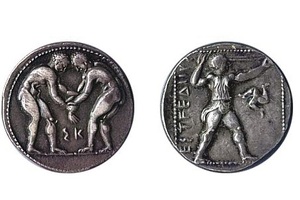 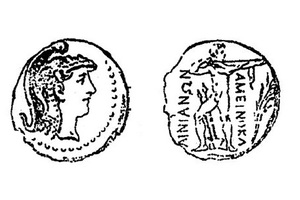 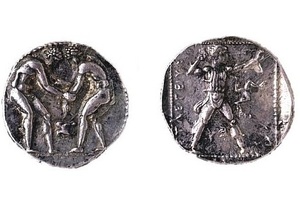 Below are the finds of slingshot shells:

1. One of the 11 bullets found in Cyprus, in the town of Hala Sultan Tekke. Date: 12th century BC Shape: slightly flattened ellipsoid of rotation. Material: Lead. Weight: 35 gr. Sizes: 3. 6x1. 6x1. 0 cm. Many similar bullets dating back to this or even earlier time, not counting the ancient ones, were found in other places of Cyprus, as well as in Crete. Astrom P. Lead Sling Bullets... p. 22, 32.

Also interesting is the fact that the projectiles could be customized. For example, the tradition of signing shells has been going on since antiquity. "Looking for Octavian's ass!" is written on a lead sling shell found by archaeologists near Perusia, where Mark Antony's brother Lucius and his wife Fulvia were besieged by Octavian's army in 41 BC. Another shell found in the same area was apparently intended for the opposite side. The caption reads: "Lucius Antonius, baldy, and Fulvia-open your asses." Sometimes, especially among the Romans, the messages are personified and contain rudeness to enemies, for example, " For Pompey's ass."

Read more about archaeology and the use of slings in the article Projectiles, Ballistae, and Bersnwark. 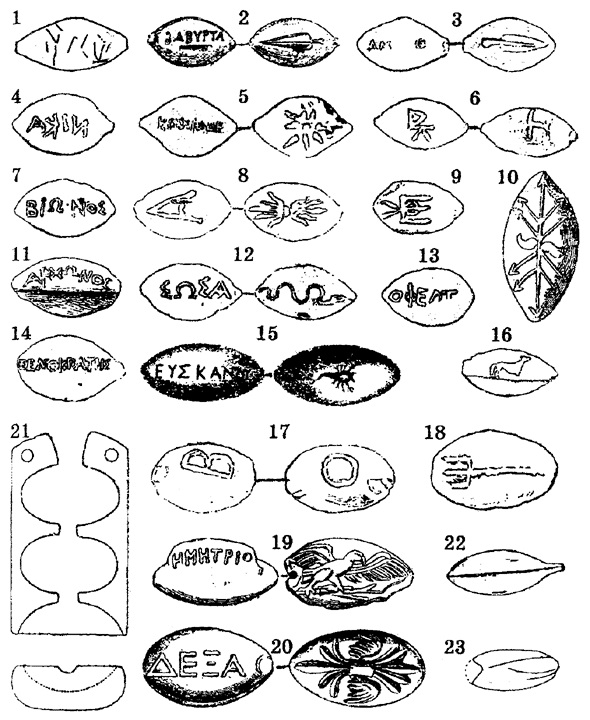 Balearic slingers — the most famous in antiquity hired light infantry, professionally wielding a sling. They were hired from the Balearic Islands. Even their name, according to Diodorus Siculus, comes from the Greek verb βάλλειν (to throw).

Balearic slingers became widely known for serving as mercenaries or allies in the armies of Carthage and later Rome.

"They have three slings, one on their head, one on their waist, and one in their hand; using these weapons, they are able to throw larger projectiles than other slingers, and with such force that it looks as if the projectile was thrown by a catapult. Because of this, when attacking cities, they are able to destroy defenders on the walls, and if we talk about battles in the open field, they can break a large number of shields, helmets and carapaces of all kinds."

Balearic slingers were hired soldiers, paid primarily for things that were scarce on the islands: wine, oil, or women.

Their high fighting qualities made them famous throughout the Mediterranean. Balearic slingers were distinguished by both the accuracy of their throws and the weight of their projectiles. They used the heaviest shells. They participated as mercenaries in the first and Second Punic Wars on the side of the Carthaginians. These wars marked the rivalry between Carthage and Rome. The Balearic slingers were under the command of Hamilcar Barca, his son-in-law Hasdrubal, and his sons Hannibal, Hasdrubal, and Mago.

When Rome decided to seize the islands, Quintus Caecilius Metellus of Balearicus ordered his ships to be covered with leather, as the shooting of slingers could sink them. Roman legions occupied the islands for two years. After the conquest of the islands, the Balearic slingers became part of the Roman auxiliary troops.

Skobelev D. A. Slingshot: projectiles and methods of throwing in Antiquity. Publication on the portal "X Legio". 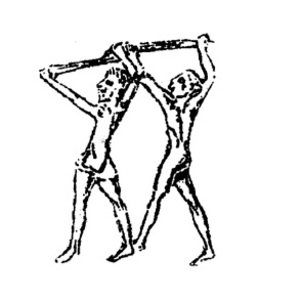 Image of two of the three slingers on a fragment of a silver rhyton from the fourth mine tomb of Mycenae. The length of the slings is 65-68 cm. 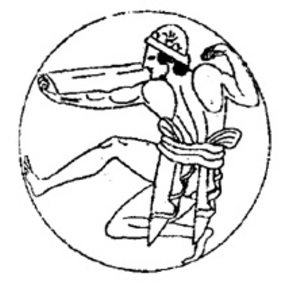 Image of a slinger on a Greek vessel. Sling length: about 84 cm. 5th century BC 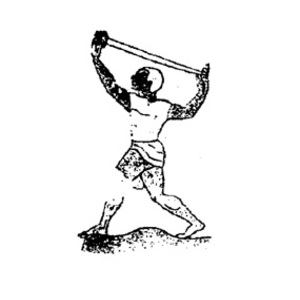 Image of a boy shooting birds with a sling in a fresco from the "Tomb of Hunting and Fishing" in Etruria. Late 6th century BC