The Notitia Dignitatum is a list of posts of the late Roman Empire, which contains several hundred thousand posts ranging from palace to provincial, which were active in both the Western Roman Empire and the Eastern Roman Empire. The posts were both civil and military.

The document was compiled presumably in the late IV-early V centuries AD.

He kept the document, and if necessary, made edits to it by the primiceries of notaries, the chief notary of the empire.

Primicerius (primikiiri) notariev (Latin: primikhrioV twn notariwn) - a title that referred (also in the late empire) to the chancellor, the head of the state chancellery, in which acts were drawn up by notaries (in the sense of observing strictly established formulas in the text) and copied by qualified scribes (scribae). Contents of the Notitia Dignitatum

The Notitia Dignitatum contains the administrative divisions of the late Roman Empire, civil and military positions, as well as the structure of the troops, indicating the digmas of the late Roman troops in both parts of the empire. The Notitia Dignitatum also features illustrations depicting stylized views of cities and fortresses that existed in both parts of the empire at that time.

The " copyists” of the late Middle Ages preserved the illustrations from the Notitia Dignitatum, but added their own elements to them, which slightly distorted the original drawings. Several copies of Codex Spirensis have survived to this day. 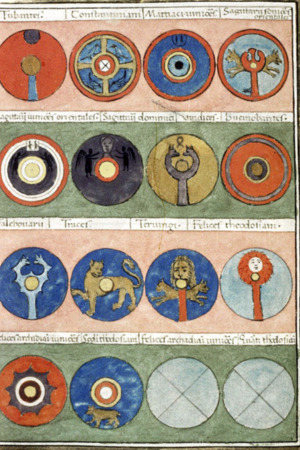 Page of a medieval copy of the Notitia Dignitatum featuring shields of the Magister Militum Praesentalis II, a list of Roman military formations

Notitia Dignitatum contains 2 lists of troops of field armies (comitates). The first list lists the combat units (numeri)and their commanders (magister peditum in infantry formations and magister equitum in cavalry), and the second list lists the locations of these units and their high command.

Notitia Dignitatum contains 90 chapters. Each chapter contains text and 5 to 20 figures per page of text.

Illustrations depict stylized, without any real reference, fortresses and cities subordinate to a particular high-ranking officer (dux or comit), that is, the number of troops under his command.

On pages that talk about duks and komitats (commanders of border troops), the inscription is always given in the upper-left corner: "[Fl]oreas [int]er [ali]is [com]ites [ord]inis [pr]imi — - "May you prosper among other satellites of the first category", placed on a white tablet in the form of a book.

All chapters begin with the same phrase: "sub dispositione viri spectabilis" — "at the disposal of the high-born dux / komes..." The lists of troops have the same structure: first the rank of the officer who commands the unit is called, then the name of the unit and its location. After the information about the division, the highest officials in the office (officium) of the dux are indicated. 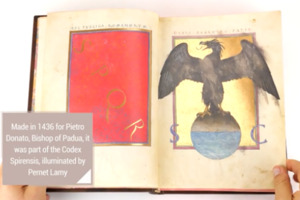 One of the copies of the Codex Spirensis, at the end of which is presented Notitia Dignitatum 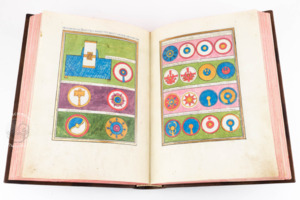 Notitia Dignitatum presented in a copy of Codex Spirensis

1. Tkachenko A. A. "Notitia Dignitatum" kak istochnik po pozdneantichnoi emblematike ["Notitia Dignitatum" as a source for late antique emblematics]. Signum: Scientific and Informational Bulletin of the Center for Herbological and Genealogical Research of the IVI RAS], Moscow, 2000, issue 2, pp. 33-40. Archived from the archive on April 23, 2013.