Social and economical standing of soldiers

The sequence of military defeats, civil wars, crop failures, epidemics, and other upheavals known as the crisis of the third century had a major impact on the entire Roman society, not least on the principle of recruitment, property, and social status of soldiers. At the very beginning of the third century CE emperor Caracalla granted the rights of Roman citizenship to all free residents of the state, effectively destroying the age-old segregation of Roman army into auxiliary cohorts (auxiliaries), where provincials willingly served for the rights of citizenship, and legions, whose service was much more profitable and prestigious, but was considered a privilege of Roman citizens. The reform of Caracalla removed the main motivation of service in the auxilia, so it ceased to exist in the form known in the time of the principate.

Formally, the military draft (dilectus) did exist in the era of the principate, but in fact the authorities resorted to it only occasionally, for example, before a major campaign of conquest or after heavy losses, as in the Marcomanian Wars. However, Rome at the end of the third and beginning of the fourth century needed a much larger army than in the old days, and the principle of voluntary service could not physically meet the needs of the military machine. The population has declined significantly due to the Antonine Plague, the Plague of Cyprian and a series of civil wars, and with it the number of volunteers willing to serve in the army has decreased. In addition, a series of defeats suffered by the Roman army in the third century CE, combined with a drop in the purchasing power of soldiers ' salaries made military service not very attractive in the eyes of the population. Therefore, the conscription came to the fore. Landowners were required to supply the army with a certain number of recruits, in proportion to the size and wealth of their land. In addition, since the reign of emperor Constantine, the sons of soldiers were also considered liable for military service, which made this service hereditary and provided a reliable source of recruits, up to majority of them according to some sources.

Strong regional differences of a huge and heterogeneous empire affected the results of conscription. In more peaceful and economically developed provinces, such as Italy, the recruits were marginals of the peasant lot or just vagabonds, whom landowners tried to send to the army instead of their own peasants. But the recruits from Gaul and Pannonia were famous for their high qualities until the collapse of the Western Roman Empire. Barbarians, settled to farm the Roman lands, ravaged in III century, were also subjected to conscription. Barbarians from outside the empire could also serve in the legions, but their percentage in units became significant only in the V century. As a result, the average level of recruits could be very, very different. However, even in the Dominate era military service meant a lot of benefits. All military personnel were provided with food and clothing (annona), and their donatives were at least once in 5 years paid in gold solidi - coins practically not subjected to inflation and thus having a reliable purchasing power. Salaries in silver coin lost their purchasing power due to the percentage drop of silver in coins from 95 to only 5 percents. In addition, military personnel received tax relief since the day of enrollment into service, and after five years soldiers received tax exemption for their wives (dominate-era soldiers were allowed to marry) and, depending on the status of the unit, for their parents. Given that a large proportion of retired soldiers became landowners, merchants or artisans, and the wives of soldiers often engaged in agriculture and crafts themselves, this tax exemptions encouraged people to send their sons and husbands to the army.

The turmoils of the third century created a possibilities for social mobility. The positions of high command were now held by people from the equestrian order, but competent and successful commoners also often reached the highest offices. The military reforms initiated by Diocletian and continued by Constantine created many officer positions, and rank and file from the common lot had every chance to become a centenary (Dominate-style centurion), and then eventually become a commander of an independent unit: legion, cavalry ala, palatine schola or auxiliary cohort. In addition, even at the rank and file level there were still profitable and promising positions, for example a standard bearer or campidoctor — drill instructor. Also, the specific privileges and size of a soldier's pay depended on the prestige and status of the army unit where he served. The reform of Caracalla and the army's need for new, unknown or previously rare combat arms, such as horse archers and armoured lancers, led to the fact that service in legions or vexillations could be less prestigious and profitable than in auxilia. In short, the age-old segregation of the army into elite legions of citizens and auxiliaries of provincials disappeared forever. 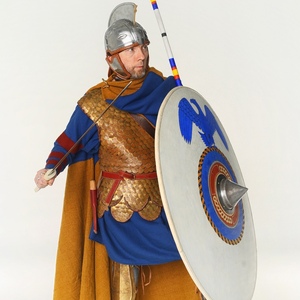 Numerous foreign invasions, revolts, and civil wars of the third age moved legions and auxiliaries from century-old permanent home bases. Moreover, vexillations, independent formations consisting of 1-2 cohorts, were very often detached from parent legions. There were a number of reasons for this. First, the army might need reinforcements in one local area, but it had no sense to send an entire legion to help, exposing a large section of the border. Secondly, turned out that a detachment of 1-2 legionary cohorts with the support of auxiliary cohort or ala could act independently. By the end of the third century CE many of these vexillations had effectively become independent units of the Roman army, maintaining only a formal link with the parent legions from which they had been detached decades earlier. Thus, the typical legion or auxilia of IV century CE numbered around 1000-1200 infantrymen.

By the beginning of the IV century CE the armament and equipment of the Roman troops had changed significantly. The need to maintain a much larger army than in the days of the principate, and with fewer resources (up to 1/4 of roman state's income used to came from the Indian ocean sea trade, now hampered by the Sassanids), led to the simplification of some elements of defensive weapons. The helmets acquired a simpler design, in obvious imitation of the Persian ones, the lorica segmentata fell out of use, being replaced by a long-sleeved and long-hemmed chainmail or scalemail. Scutum was replaced by a round or oval shield of a lenticular profile, more fit to mass-manufacture. The hasta became the main melee weapon, the gladius was replaced by the spatha, mass-produced for infantry since III century CE thanks to the pattern-welding technology. The first-rankers, according to Vegetius, also wore greaves. Infantrymen could still use pilums (somewhat simplified design, in some sources called spiculum), lighter darts-lanceas, or plumbatae — a small darts weighted with lead.

The clear distinction in tactics and equipment of the legions and auxiliaries, so characteristic for the principate, also disappears by the beginning of the IV century. For example, considering infantry, all infantry units, be it legions, auxiliaries or scholas, could consist of hastati, lancearii and sagittarii. It is worth noting that the Dominate era is characterized by a high degree of military equipment unification of different troop types. For example, a set of spearmen (hastatus) turns into the archer (sagittarius) set by replacing the shield and spear with a bow and quiver with arrows, all other items remain unchanged. Adding greaves and a horse with harness turns a foot archer into a horse archer. Replacing the spear with javelins turns the spearman into a skirmisher (lancearius). The Dominate-era reenactment's appeal is the ability to create a lot of sets mostly using the same items. 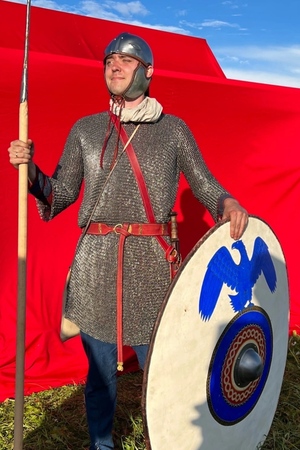 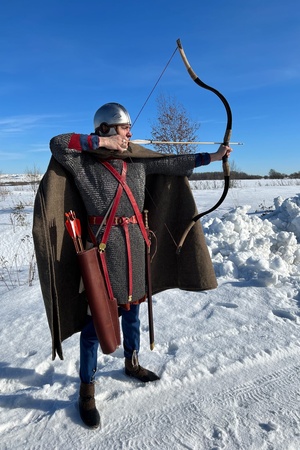 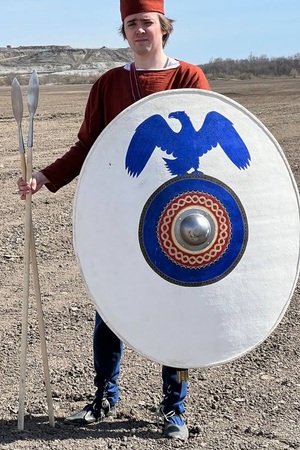 According to Vegetius, the Roman infantry formation of his era consisted of six ranks. The first, second, third and sixth were hastati, the fourth and fifth were lancearii and sagittarii. The increase of both the number and combat abilities of a Roman cavalry, separated into independent units in III century CE, made possible to assign all maneuvers on the battlefield that required initiative and mobility to cavalry units. Roman infantry mostly fought defensively, meeting the enemy's attack with a hail of arrows and javelins, and then deflecting it with the wall of shields and spears. Units of cavalry and artillery with their crews were attached to the infantry when needed. 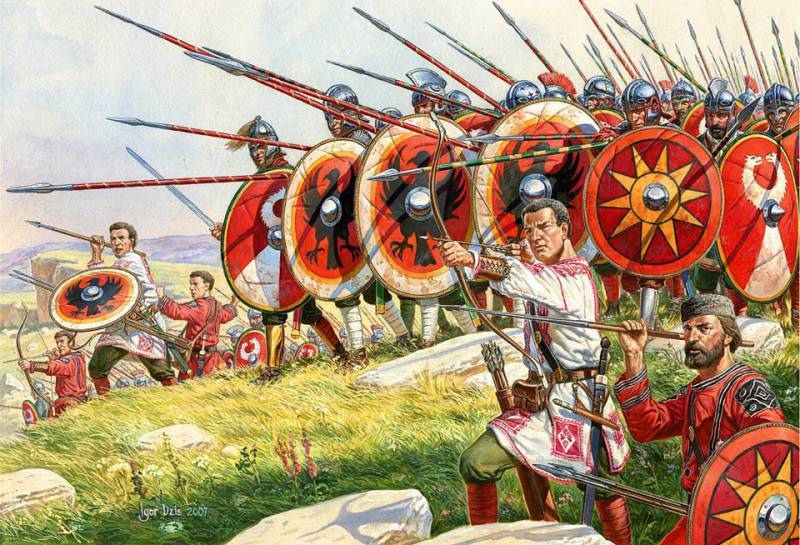 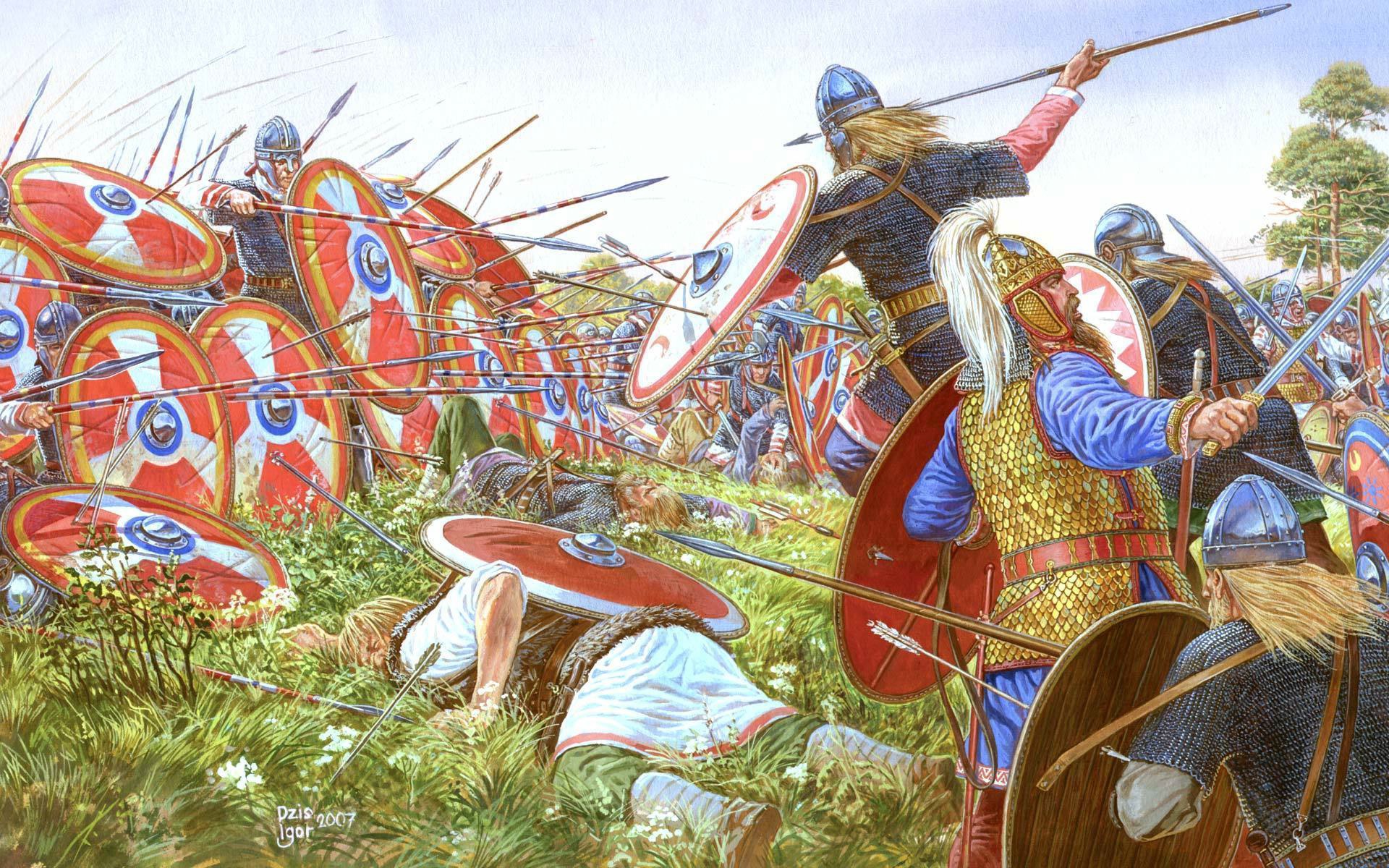 The tactics, armament and organization of the Roman troops, described above, were adequate for their time, as evidenced by the numerous Roman victories in battles and wars of the IV century. By the middle of the V century, however, the economic and social decline of Western Rome bereft her army of supply and motivation to serve, which was one of the reasons for her collapse. Eastern Rome, on the other hand, preserved the legacy of the Roman military until the theme reform of the VI century. 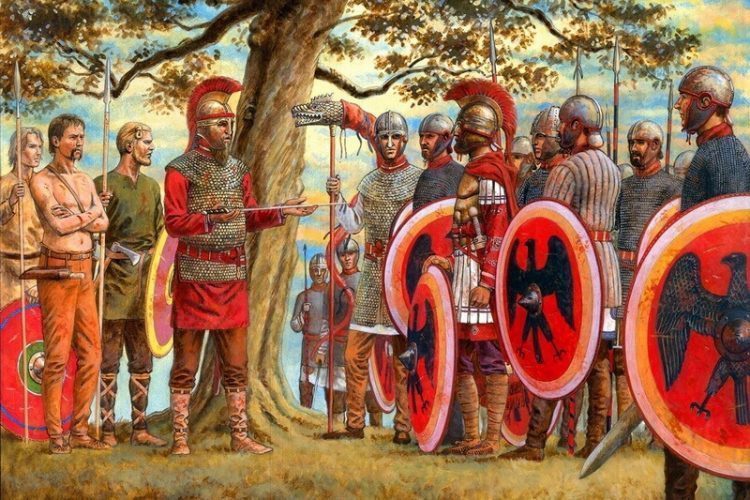 The Roman army of the Dominate era included quite a lot of combat arms, perhaps more than ever before in its history. In addition to aforementioned spearmen and archers late Roman army included:

5) The Fate of Rome: Climate, Disease, and the End of an Empire, Kyle Harper

6) The Roman Empire and the Indian Ocean: Rome’s Dealings with the Ancient Kingdoms of India, Africa and Arabia, Raoul McLaughlin 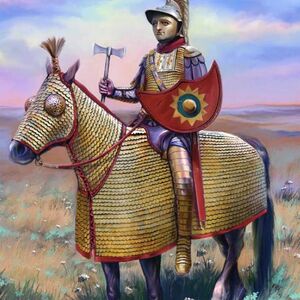 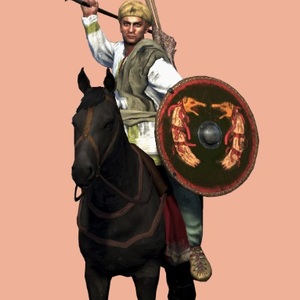 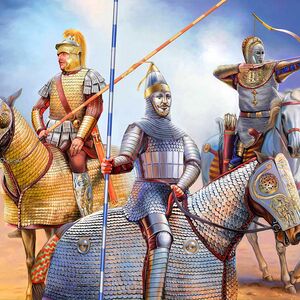 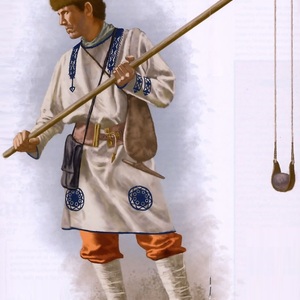 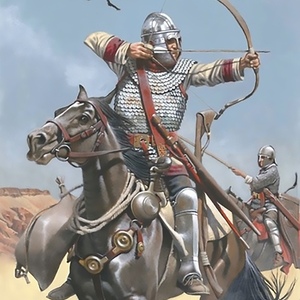