Hasta — a type of ancient spear, a sharp tip on a long shaft, causing piercing blows. As a rule, it consisted of a metal pole for sticking into the ground, a wooden shaft and a metal tip. Spears could be decorated with gold, various patterns and inlays.

There were several types of copies: 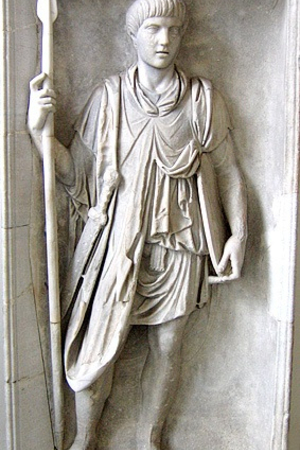 Bas-relief of a Praetorian guard from Pozzuoli, armed with a spear, 2nd century AD. 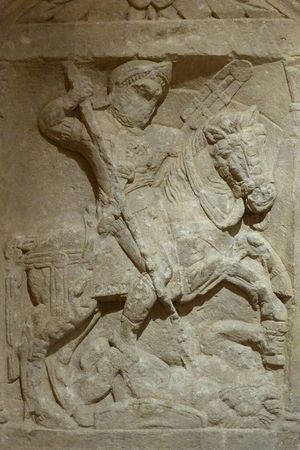 Tombstone of a horseman with a spear (Sex Flavius Genialis). Corinium Museum, Cirencester. CSIR I. 7 No. 137, 1st century AD 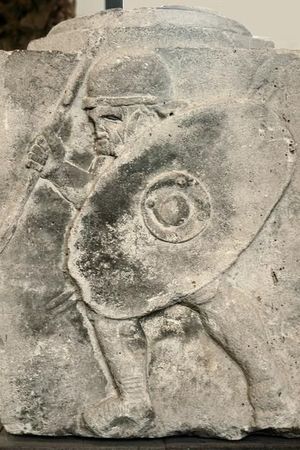 Image of a Roman auxiliary with a spear and javelins. Bas-relief of the pedestal of one of the columns that decorated the courtyard in front of the complex of buildings of the headquarters (praetorium and principia) of the citadel of the Roman city of Mogontiac (Latin Mogontiacum, modern. German city of Mainz). "Land Museum", Mainz, Germany. Second half of the first century AD

The Roman poet Ennius in the 3rd century BC mentions the gasta as a throwing weapon. From gasta, the name was given to the Roman combat unit of the Hastati, although the spear of the triarii was also called "hasta". In the time of Polybius, the Hastati were already armed with pilums. At the same time, hasta (hasta velitaris) is called a dart from a variety of Roman skirmishers-Velites. Historians suggest that at first the Romans were armed with long spears for hand-to-hand combat, which most likely were classical ghasts, and later they began to use lighter variations of spears, and mainly their throwing varieties (pilums, javelins, etc.).

It should be noted that the symbolism of such weapons as the spear existed among the Romans. It was a favorite weapon of the war god Mars. Fetials (Latin: fetiales, an ancient Roman priestly college) used to throw a bloody spear – gasta into enemy territory as a declaration of war ritual. Gasta could also be a special reward. The spear without a tip ("hasta pura" - literally - "pure gasta") was awarded during the republic as a military award to primipiles after completing their service. There was also a celibaris hasta, a spear traditionally used to cut the bride's hair. There is an opinion that a special gasta took the life of gladiators. During the bidding, a spear stuck in the ground announced the beginning of transactions ("subhastationes"), and gasta usually stood before the court of centumvirs ("hasta centumviralis").

In the Roman Empire of 1-2 centuries AD, spears were used mainly by foot and horse auxiliaries, as well as gladiators-hoplomachs. Ghasts did not rush, but were used mainly for hand-to-hand combat. There was also a widespread subspecies of the pilum spear, which legionnaires used in ranged combat. 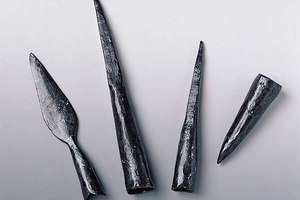 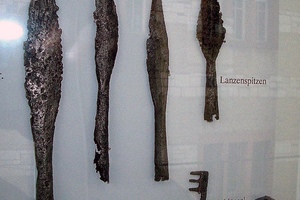 Roman spearheads. Germany, Regensburg. Displayed in the Catholic Church of St. John the Baptist. Wolfgang. It is assumed that they were used in Cohors I Flavia Canatenorum. 1-2 century AD 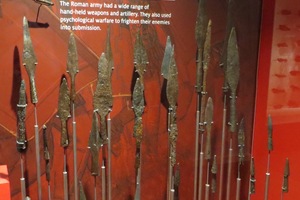 There is a lot of evidence for the active use of copies by Celts. Diodorus writes about the tips "in the elbow length" and (approximately 45 cm) and more. It should be noted that in all periods of the Latene culture there are arrowheads of impressive size. One huge specimen found in the La Ten settlement reaches 65 cm. Spearheads and javelins were especially often found in military graves by archaeologists. Also, three complete sets of spears were found in La Ten, and they were apparently used as hand-to-hand weapons, and not as javelins (both arrowheads and submarines were found, whose length was 2.5 meters). The shape of the tips was varied-thin, wide, leaf-shaped, with and without a rib, as well as with various bends. 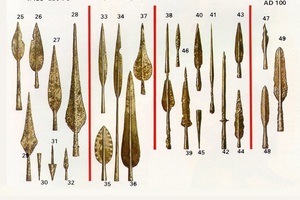 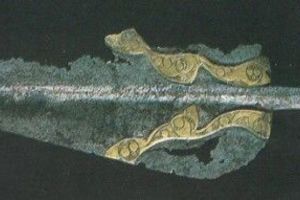 Spears from the Greeks

The most famous spearmen are of course the Greeks, famous for their hoplites and phalanxes. They relied on long spears, which allowed them to dominate the waters of the Mediterranean Sea for a long time. An example of a Greek spear is the sarissa. 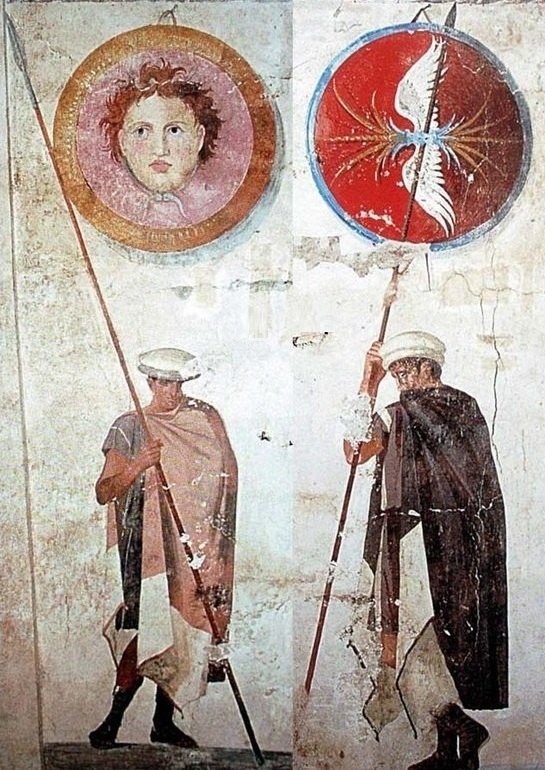 Image of Sarisophores in the tomb of Agios Athanasios, late 4th century BC

Sarissa became most famous in Macedonia during the reign of Philip. Historians believe that this word originally meant the spear shaft of the Macedonians. Ancient Roman historians called sarissa various types of Macedonian spears, not just long pikes. For example, Quintus Curtius Rufus calls sarissa a javelin thrower, and Arrian B uses this word for a melee long weapon.

Sarissa is also found in the description of Polybius: "The length of the pike according to the initial plan is 16 cubits [1 cubit = 45 cm], but adapted for use — 14 cubits, from which we must subtract the distance between the soldier's hands, as well as the weighted part of the pike [the end of the shaft opposite the point], which is necessary for holding — 4 cubits in total. Obviously, the lance should protrude 10 cubits from the body of each Hoplite when he steps on the enemy, holding the lance with both hands.".

Polienus describes the tactics used during the campaign against Macedonia of the Spartan general Cleonymus and the Epirus king Pyrrhus in the 270s BC.:

"At the siege of Edessa, when a breach was made in the wall, spearmen with pikes 16 cubits long came out against the besiegers. Cleonymus deepened his phalanx and ordered the first rank not to use weapons, but to quickly seize the enemy's pikes and hold them. The soldiers of the next row were to immediately move out and get close to the enemy. When the pikes were captured in this way, the enemy tried to retreat; but the soldiers of the 2nd rank rushed forward and took them prisoner, or killed them. With Cleonymus ' move, the long and formidable sarissa proved useless, and became more of a burden than a dangerous weapon.".

The battle of the Romans against the Macedonian army in 168 BC is also described by Plutarch:

"The Macedonians in the first lines managed to drive the points of their sarissas into the shields of the Romans and, thus, became inaccessible to their swords... The Romans tried to fight off the sarissas with their swords, or bend them to the ground with their shields, or push them aside, grabbing them with their bare hands, and the Macedonians, gripping their spears even more tightly, pierced the attackers through - neither shields nor shells could protect them from the sarissa's blow.".

The shaft of the sarissa was made mainly of dogwood. The Archaeological Museum of Thessalonica contains the components of a spear from the royal crypt in Vergina. It is assumed that these are metal parts of a composite xystone, although there is an opinion that this is a sarissa, and the validity of this opinion would somewhat simplify the theories about the strength, ease of operation and transportation of this spear. The structure of the find includes: a leaf-shaped tip, a stem and a central reinforcing sleeve. The shaft diameter of this find is 3.2 cm, and the mass of the entire peak is about 6.8 kg. 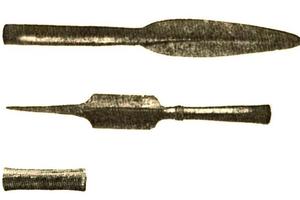 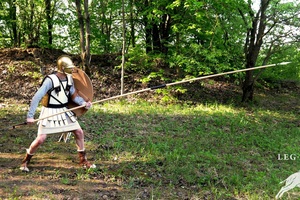 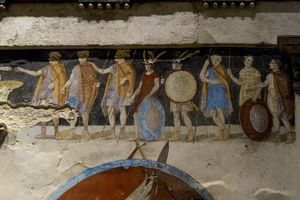 Image of Greek spearmen in the tomb of Agios Athanasios, late 4th century BC

Spearmen were available to almost all peoples in the ancient era. The spear will be an excellent weapon for the Greeks, Romans, Celts, Germans. In Roman reconstruction, it will be appropriate for use by auxiliaries and hoplomachs. 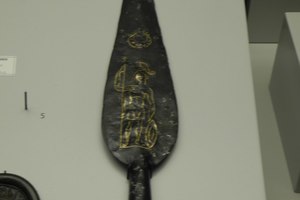 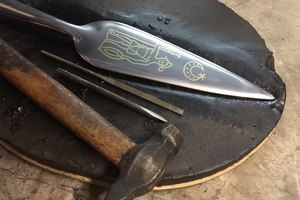 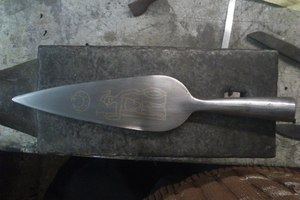 Neihardt, A. A. Legends and legends of ancient Rome