Trophy, tropeum (Latin: tropaeum, trophaeum; Greek: τρόπαιον from τροπή) — a type of ancient symbolic structure: a monument-trophy, which was erected by the winners from the equipment of defeated opponents. Often depicted on equipment and architecture as one of the symbolic motifs used.

Also, this term has taken on an important meaning in the architecture and monumental and decorative arts of classicism, neoclassicism and Empire, becoming a figurative motif, which is a sculptural, relief or pictorial image of weapons, military armor and attributes. 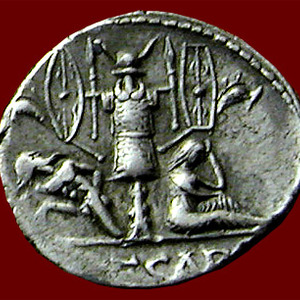 A coin from the time of Julius Caesar with a trophy. 1st century BC 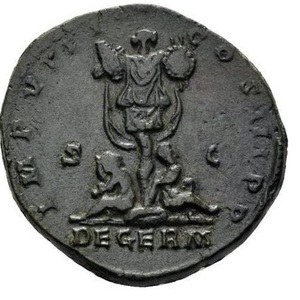 Coin with a trophy over the Germans and Marcus Aurelius on the reverse side. AD 161-180

The tradition of raising the trophy

Initially, the term "trophy" meant rather than" prey", but was a sacred object. It was a pillar (or tree, cleared of branches and bark) on the battlefield, on which the soldiers of Greece and Rome after the victory hung the armor of the defeated. Usually it was a suit of armor and helmet, as a sign that victory on the battlefield was left to them. The erection of this pillar was symbolic, dedicatory in nature, as evidenced by ancient texts.:

Pious Aeneas, although he is hurried by the care of the Fallen to betray the earth, although sadness darkens his soul, Still with the dawn he hurries to fulfill his vows to the gods. Having filled the hill and stripped the huge oak of its branches, He raises up a trophy in your honor, Lord of battles, And dresses it with all its weapons removed: In a spray of bloody dew he hangs a shaggy helmet and broken Spears, and a heavy carapace pierced In a dozen places; and on the left side of the trunk he firmly fixed a Shield of brass and a sword in an ivory scabbard. (Virgil, The Aeneid, XI, 2-11)

The rite of construction of the trophy was given special significance. In the war of Sparta and Argos for the city of Phyreus in Laconia, the outcome of the battle was to be decided by a "duel" between two detachments of three hundred people from both states. Both troops left a detachment and retreated. The two squads started a battle and fought all day long. By nightfall, only three seriously wounded men were left alive — two Argosians and a Spartan named Ophriades. No one has the strength to fight anymore. Both Argosians left the battlefield and went to their own people to report the victory. But the Spartan remained, and collecting the armor from the slain enemies, hung them on a tree near the battlefield, writing in his blood on the shield: "Spartans to Zeus, as a gift from their victory." By morning, the troops had returned, and both sides considered themselves victorious. Despite the fact that the conflict broke out and the Spartans emerged victorious in the more crowded battle that followed, Ophriades ' act gave their victory a highly moral character, since thanks to it, the battlefield was considered for them. Ophriadus was hailed a hero.

Another mention of blood being applied to trophies is in the story of the Roman victory over the Frankish leader Butylinus, when the river Capua overflowed with corpses. On a pillar erected on its bank was inscribed an elegy: "Oh, happiest river! Instead of a trophy, let it be painted with barbarian blood."

Tacitus mentions that after one of the victories of the Romans over the tribes of the Germans under the emperor Tiberius, a trophy was built from captured weapons, on which the names of the defeated tribes were written.

In ancient Greece, the tradition of raising trophies has been known since the Archaic period. The monument was placed on a raised platform and dedicated to the patron deity. A special inscription mentioned the names of the winners and the defeated side. Upon completion of this, the trophies were considered inviolable. As a rule, even the opponents did not dare to move them, except when the trophies were built without a valid reason.

To prevent conflicts from continuing due to the long retention time of trophies, there may have been a law according to which trophies were made of wood, and not of strong materials (stone, metal). In case of destruction, it was forbidden to correct and restore them. For example, the Macedonians accused the Thebans before a gathering of Amphictyons of erecting a trophy made of metal. Over time, more metal trophies began to appear. Initially, trophies were placed directly on the battlefield, and since there were few suitable plains for battles in mountainous Greece, they were often replaced with a new trophy after a new battle. Over time, they began to be erected in Hellenic shrines, such as Delphi or Olympia — to further glorify the victorious state.

If the victory was won at sea, then the trophy was built on the shore closest to the battle site. Sea trophies were often decorated with the prows (Greek: ακρωτήρια) of ships and dedicated to Poseidon.

The Romans initially did not put down trophies, but took home enemy armor taken on the battlefield (Latin spolia), with which they decorated public buildings and private dwellings. But later they adopted the custom of perpetuating the victory with trophies from the Greeks. The first Roman trophies were erected by Domitius Ahenobarbus and Fabius Maximus in 121 BC, after the victory over the Allobroges. Pompey set up the trophy in the Pyrenees after winning in Spain. Caesar - in the vicinity of Zela after defeating Pharnaces. Drusus - in the vicinity of the Elbe in memory of the defeat of the Germans. But the Romans were much more fond of erecting memorial signs in Rome itself, rather than on the site of a battle. The most striking example of this approach is the triumphal arches, which are also essentially trophies. In Rome, the Forum had a Rostra, a rostrum for speakers decorated with the prows of ships.

The trophy known as "fat armor" (spolia opima) was particularly honorable. Only the commander of the army (king or consul), who personally killed the enemy commander in a duel and took off his armor, had the right to bring it as a gift to Jupiter Feretri. There were only three such cases in the history of Rome:

The description of the mythical victory of Aeneas over Mezentius is connected with this tradition.

There are many found Roman ones issued in honor of someone's victory, often with a general's profile on one side and a trophy on the other, sometimes together with sacrificial objects and bound prisoners, or in combination with the victory goddess Victoria.

Although in Ancient Rome, the shape of the building — tropeum-was formed over time, pillars with suspended weapons continued to be built in the imperial era, since their construction required much less time and they could be put up en masse.

Trophies were already used as decorations, with decorative armor (and not real ones captured from the enemy). Josephus, in his Antiquities of the Jews, tells of a conflict that occurred in Jerusalem, when Herod I established games in honor of Caesar and built a theater for this purpose, decorating it on the Roman model, in particular "with images of red gold and silver of his trophies from those nations that he defeated in war." This offended the Jews, who saw them as illegal images of armed men and began shouting that they would not allow "idols"in their city. After that, Herod invited the most influential of the discontented to the theater and, pointing to the trophies, asked what they took them for. When they replied that they were images of people, he ordered them to remove their weapons and showed them bare wooden poles, which neutralized the conflict.

It is interesting that Tertullian, in his epistle To the Gentiles, points out that the cross he worships as a Christian is by design a pillar of an inferior pagan trophy of the Romans, which in Christianity is depicted without any armor or ornaments. 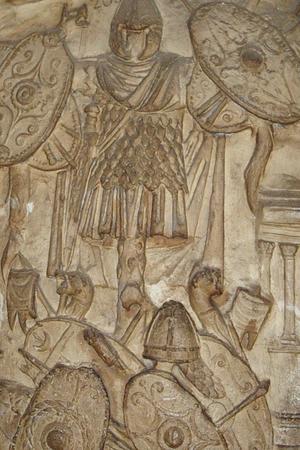 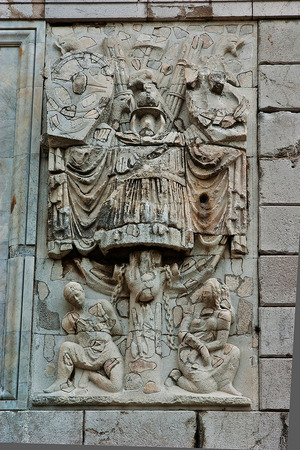 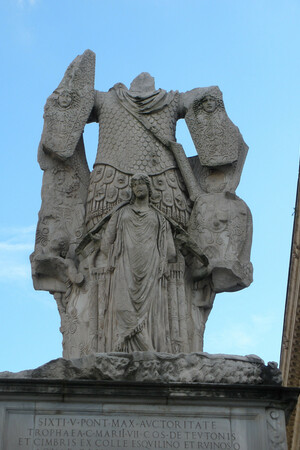 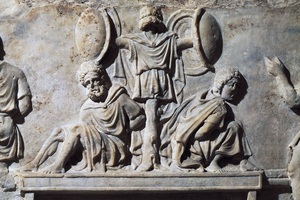 Roman trophy with Jewish captives. Part of a bas-relief from the temple of Apollo. Rome, Capitoline Museum. 1st century AD 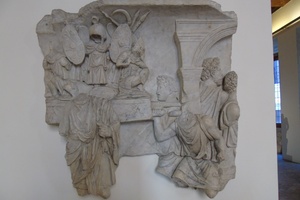 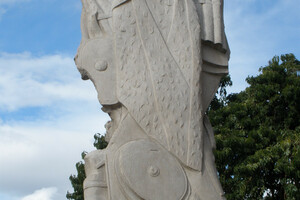