The Jugurtha War (Latin: Bellum Iugurthinum) was an armed conflict between Ancient Rome and the Numidian king Jugurtha, which lasted from 112 to 105 BC.e. The success of the tactics of bribery and corruption used by Jugurtha revealed the corruption of morals among the top of Roman society. In the context of the decline of Roman virtue, the author of the most detailed treatise on it, the Roman historian Sallust, considered this war.

Numidia was a state that existed from the third to the first centuries BC in North Africa (in what is now northern Algeria, part of Tunisia and Libya), where Berber tribes lived, which the Greeks and Romans called Numidians. Later, Rome would take over Numidia in 46 BC and make it one of its own provinces.

Before the formation of a single state in the third century BC, the Numidians were nomads, then briefly united into a single state with the capital in the city of Cirta (now the city of Constans in Algeria), but then it broke up into two parts: Western and Eastern. Both parts of Numidia fought against Carthage, which wanted to subdue them. As a result, the king of Eastern Numidia, Masinissa, was able to defeat Carthage and unite Numidia into a single state in 202 BC, with the help of the Romans.

Masinissa-considered the first king of a unified Numidia, reigned in 202-149 BC. e., became famous for his participation as an ally of Rome in the battle of Zama in 202 BC. e. against the general of Carthage in the 2nd Punic War (218-201 BC), Hannibal. Rome helped Masinissa unite Numidia into a single state, making him its ruler with the status of an ally of Rome.

After the death of his father, Jugurtha was raised by his father's brother Mitsips, who became the next ruler of Numidia, who had two sons of his own, Adgerbal and Giempsal. The young Jugurtha was so popular with the Numidians that his uncle Micypsa tried to get rid of his nephew by sending Scipio Africanus the Younger, who was besieging Numantia at that time. Jugurtha managed to convince the Roman senators of his loyalty, and under their pressure, Micypsa agreed to adopt Jugurtha. Before his death, Mycypsa divided Numidia into 3 parts, but after his death in 118 BC. Yugurta claimed sole rule and began a struggle with his brothers.

As a result, he killed Giempsalus in 117 BC, and forced Adgerbalus to flee to seek protection in Rome in 116 BC, since Numidia had the status of a Roman ally and the Roman Senate had the last decisive word in the dispute between the two brothers for the throne of Numidia. Jugurtha himself followed his brother to Rome with an embassy. As a result, the Senate commission divided Numidia in such a way that Yugurta got the less settled and developed western part of the country, but nomads lived there, who were considered good warriors, and Adgerbal got the Eastern part. 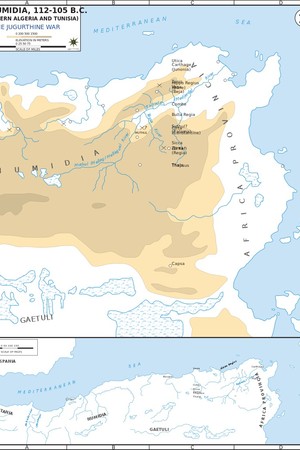 Map of Numidia and the Yugurta War.

The beginning of the war

Four years later, in 112 BC, Jugurtha again attacked Adgerbal, who asked for help from Rome. Rome at that time decided to help him diplomatically, which, however, was not crowned with success, and Rome could not yet resolve the issue by military means, since it was facing a military threat from the Germans. As a result, Jugurtha took the capital of Numidia, the city of Cirta.

After the capture of the capital, Jugurtha killed not only Adgerbal, who had the title of friend and ally of the Roman people, but also Roman citizens who participated in the defense of the capital. In response, the Senate declared war on Yugurta, which was named Yugurta after the tsar. One of the most important and detailed sources about this war is the book of the ancient Roman historian of the first century BC Gaius Sallust Crispus - “The Jugurtha War". In this book, the author examines the Yugurta War in the context of the decline of Roman virtue in favor of bribery and corruption.

Coin of Numidia during the reign of its king Jugurtha. Minted around 110 BC, the coin features King Yugurta on one side and an elephant on the other. Private collection.

Main events of the Yugurta War

At this time, an embassy from Jugurtha arrived in Rome to resolve the issue in peace, but the senate did not accept it and the embassy returned to Numidia with nothing. It fell to one of the consuls of 111 BC, Lucius Calpurnius Bestia, to start the war. In his army, one of the legates was Marcus Aemilius Squarus, who led a senatorial embassy to Jugurtha in 112 BC, trying to resolve the dispute between Jugurtha and his brother by peace, but the embassy returned to Rome with nothing, and in fact failed.

Bestia captured a number of cities in Numidia, and then made peace with Yugurta, since the fight against the Germans in the west required significant forces, and Yugurta itself was a strong opponent, and Rome could not yet afford to fight with two strong opponents on two fronts.

Although rumors of Jugurtha's bribery of the Beast began to circulate in Rome, and his peace was not approved by the Senate. Jugurtha arrived in Rome to strengthen his power and fight against a rival for power in Numidia, which was Masinissa's grandson, Gulussa's son, Massif.He also arrived there. Both of them had come to Rome to decide on the question of power, and Jugurtha still had to answer about the legality of the peace concluded between Rome and Numidia.

As a result, Jugurtha was not allowed to speak in the people's assembly, and he was killed in Rome, but by secret order of Jugurtha, the king was forced to flee Rome, saying in his escape his famous words: "O corrupt city, it will soon perish as soon as it finds a buyer." Ancient authors give contradictory information about the circumstances of Rome's departure from the Numidian king Jugurtha. The Roman historian Titus Livy reported that Jugurtha secretly fled Rome, while his colleague, the same Roman historian Sallust, reported that Jugurtha left Italy on the orders of the Roman Senate.

As a result, the war between Rome and Numidia resumed and one of the consuls of 110 BC, Spurius Postumius Albinus, became the new commander of the Roman troops. Albin wanted to defeat Yugurta in one campaign and make peace with it in order to be in time for the next elections in the capital. But Jugurtha dragged on the war in every possible way, and failing to defeat Jugurtha before the elections, Albinus left for them, leaving his brother Aulus Posthumus Albinus to command the troops instead.

This circumstance was taken advantage of by Jugurtha, who attacked the Roman camp at night and defeated the Romans. Jugurtha forced the Romans to go “under the yoke”, humiliating them to death, and then imposed a peace treaty on Aulus, under the terms of which all Roman troops were to leave Numidia within 10 days. Rome did not approve this treaty, as well as the Bestia treaty, and it was decided, despite the defeat, to continue the war. The new commander of the Roman forces was one of the consuls of 109 BC. e. Quintus Caecilius Metellus, who was reputed to be an honest and incorruptible aristocrat. 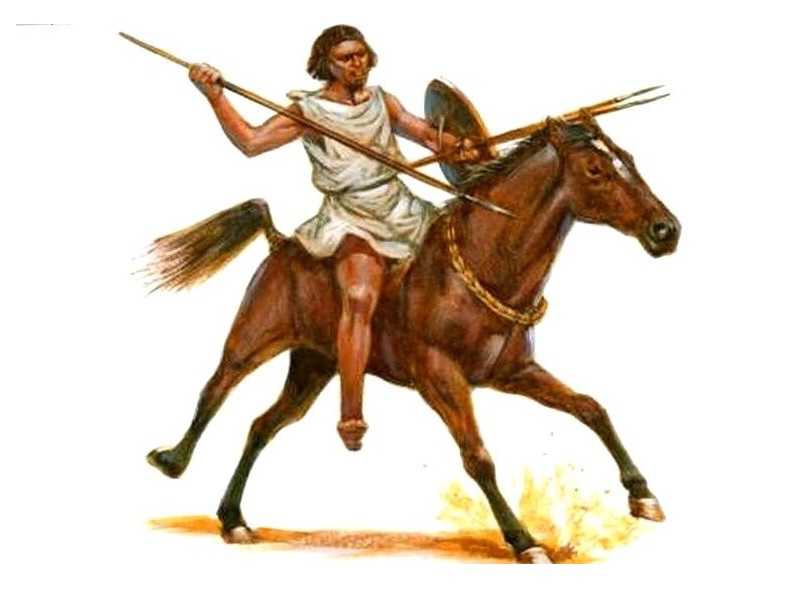 Metellus successfully started the war by reorganizing the Roman army there and adding fresh reinforcements from Rome. He invaded Numidia. He inflicted a series of defeats on Yugurta and his generals. Yugurta tried to negotiate peace with him.

Metellus did not reject them, but negotiated, simultaneously persuading the Numidian ambassadors to hand over Jugurtha to him, dead or alive, and continuing his offensive through Numidian territory. As a result, in the winter of 109-108 BC, after a series of battles won by the Romans, failed negotiations and the devastation of Numidia, Metelus withdrew to the Roman province of Africa, leaving Roman garrisons in important Numidian cities.

In winter, Yugurta again resumed negotiations, but he refused to surrender, and the war resumed with the arrival of spring. Metelus again invaded Numidia and led an offensive against the city of Tala, located in the desert, where Jugurtha was hiding with his family. But Jugurtha did not wait for the approach of the Romans to the city of Tala, fled from it at night and through the desert reached his father-in-law, the Moorish king Bocchus (reigned in 118-91 BC), whom he began to persuade to take part on his side in the war with Rome.

Bocchus supported Jugurtha by giving him troops and the war continued. Metellus decided to drive a wedge between the allies and began negotiations for peace with Bocchus, but Metellus could not finish them and the war, since one of the newly elected consuls of 107 BC.e. by the decision of the people received the province of Africa, and therefore command in this war.

This consul was a former subordinate of Metellus, Gaius Marius. Metellus was recalled back to Rome. Metellus did not finish this war, but for his success in it, he was granted the agnomen (nickname, nickname) “Numedia”.

Gaius Marius arrived in Numidia with reinforcements, which he was able to replenish the troops and led an offensive deep into Numidia, managing to take the city of Capsa and destroy it, as well as capture the fortified Muluccan fortress, where the treasures of Jugurtha were stored. After that, Marius took a number of other fortresses and cities.

At this time, King Bocchus came to Jugurtha, as he had promised him a third of Numidia for his help in the war with Rome, and together they attacked the Romans, who were returning to their winter quarters, but were eventually defeated by Gaius Marius himself. After that, Marius defeated the Numidians and took the Numidian capital, Cirta. Shortly before the attack of the combined forces of Bocchus and Jugurtha, a young Quaestor Lucius Cornelius Sulla arrived in the Roman camp, with whom Marius would later start a civil war due to disagreements.

After the capture of Cirta, Marius received an embassy from the Moorish king Bocchus, who offered to give Jugurtha to the Romans in exchange for an alliance with Rome and part of the territory of Numidia. After the meeting, the embassy went on to Rome, and Marius sent Quaestor Lucius Cornelius Sulla on behalf of Rome for further negotiations with Bocchus.

In the end, the parties came to an agreement, and Bocchus seized his son-in-law and handed him over to Sulla. Sulla will later order a ring in memory of this, which will be engraved with the scene of the delivery of Bocchus to Sulla-Sulla is depicted in the center sitting in a chair. To the left of it is a kneeling figure of the Moorish king Bocchus, on the other side is a bound Jugurtha. A scene from this ring would later be minted on a coin, in memory of his father, by Lucius Cornelius Sulla's son, Faustus in 56 BC.

As a result, the war was over and Marius arrived in Rome, along with the captured Jugurtha. Yugurta was held in royal robes in the triumph granted to Mary for the end of the war, and then executed in the Mamertina prison in 104 BC.

Denarius depicting the captivity of the Numidian king Jugurtha, Sulla. Minted by L. K. Sulla's son, Faustus Sulla, in 56 BC. Most likely, the reverse of the denarius shows a copied image from Sulla's ring, which he ordered for himself after the end of the Jugurtha War. Sulla is shown in the center sitting in a chair. To the left of it is a kneeling figure of the Moorish king Bocchus, on the other side is a bound Jugurtha.

Results of the war