Publius Aelius Traianus Hadrian, better known as Hadrian (Latin: Publius Aelius Traianus Hadrianus), was a Roman emperor from 117-138 AD. He received the tribunalship 22 times (in 117 cases, twice: on August 11 and December 10, then annually on December 10). He was proclaimed Emperor twice: On August 11, 117 and in 135 AD, he was consul in 108, 118 and 119. Full title at the time of his death: Emperor Caesar Trajan Hadrian Augustus, Grand Pontiff, endowed with the power of Tribune of the people 22 times, twice Emperor, three times Consul, Father of the Fatherland (Lat. Imperator Caesar Traianus Hadrianus Augustus, Pontifex Maximus, Tribuniciae potestatis XXII, Imperator II, Consul III, Pater Patriae). The third of the five good emperors. 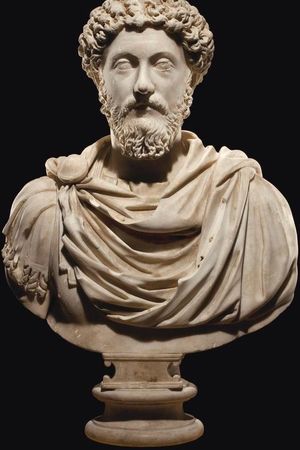 Hadrian was the son of Roman senator Publius Aelius Aphras, whose grandparents had moved from Adria to Italy in Scipio's time, and Domitia Paulina. Hadrian's father was a praetor in Rome, and died when Hadrian was ten years old. Hadrian was raised under the care of a great-uncle, the Emperor Trajan, whose sister's granddaughter he married in 100 AD. Hadrian was the first to inform Trajan, who was in the Colony of Agrippina, of Nerva's death. He fought in the wars with Decebalus, was twice awarded for bravery, and was elected to the senate. During the second campaign against the Dacians, Hadrian fought with Sarmatians. In the 108th year he became consul. A few years later, he fought in Armenia and Mesopotamia, being a legate at Trajan's headquarters, but did not do anything outstanding. However, when the governor of Syria was sent to Dacia in 117 to quell the riots that had arisen there, Hadrian was appointed his deputy, which gave him an independent command over troops.

Trajan, who was seriously ill by that time, decided to return to Rome, but only reached the Cilician city of Selinuntes, where illness prevented him from moving on. He was cared for by his wife, Plotina, one of the supporters of Hadrian, who was one of the obvious candidates to succeed Trajan, but was not formally adopted by him. The dying Trajan adopted Hadrian, but since the document was signed by Plotina, it is assumed that Trajan was already dead by this time. Hadrian learned of Trajan's death on August 11, 117, and the Syrian legions proclaimed him emperor, but he was forced to stay in Syria for some time, as the difficult situation there required it.

Excerpt from the book "The History of the Augustans":

"He was tall, distinguished by external grace, curled his hair with a comb, grew a beard to hide the natural flaws of the face, had a strong build. He rode and walked a great deal, always doing exercises with a weapon and a spear. When hunting, he often killed lions with his own hands. While hunting, he broke his collarbone and rib."

Adrian didn't have any children of his own. Hadrian's greatest love was the young Antinous. Hadrian met Antinous in 124, when he was traveling through the province of Bithynia in northeastern Asia Minor. Since the year 128, the young man was constantly with the emperor. In 130 AD, while they were in Egypt, Antinous drowned in the Nile. The circumstances of the tragedy were mysterious and gave rise to many rumors. It is known for certain that Hadrian's grief was inconsolable and he ordered the priests to deify Antinous. On the site of the death of his favorite, Hadrian founded the city of Antinopolis( Antinopolis), where games were held every year in honor of the young god.

Hadrian's policy was very different from Trajan's policy of conquest. First of all, Hadrian gave up Assyria and Mesopotamia, returning them to the Parthians. Armenia also left the provinces and was considered only a protectorate of Rome. Having solved all the problems in the East, the emperor left Antioch in the autumn of 117. But he did not go to Rome, but to the lower Danube, where it was necessary to resolve claims of the Roxolani, who violated the borders of Dacia. Messengers from the capital arrived with the news that a conspiracy led by Lucius Quietus and Trajan's associates had been discovered in Italy. Soon, Quiet himself was executed. But the fears that Hadrian would rule in the spirit of Nero or Caligula were not justified. Hadrian arrived in Rome in the summer of 118, and was received with great honor. In addition to the traditional magnificent pageantry, a posthumous entrance to Trajan, whose statue stood on a chariot, was also arranged in honor of Hadrian.

Hadrian stayed in the capital for three years, after which he set out on his first journey — to Gaul and the provinces along the Upper Rhine and Danube. In the triangle between these rivers, the emperor reinforced a system of fortifications. The following year, he traveled to Britain, where work began on the construction of Hadrian's Wall. In 122, the emperor returned to Gaul. In the south, in Nemaus, he erected a temple in honor of the Empress Pompeii Plotina, who had recently died. Hadrian spent the winter of 122-123 in Spain, then went to Africa, to Mauritania. There he received news of the impending war between Rome and Parthia, and hurried to the scene. Hadrian managed to defuse the situation through negotiations, but was forced to stay there until 124 years. He visited Antioch and Palmyra. In 124, the emperor toured the Balkan provinces of Rome and founded the city of Adrianople in Thrace. In the winter of 124-125, Hadrian decided to spend time in Athens. The following year, he was initiated into the Eleusinian Mysteries. Hadrian returned to Italy via Sicily, where he climbed Mount Etna and watched the sun set. The emperor stayed in Rome until the summer of 128, and then went back to Africa. In Numidia, he inspected a military camp and observed infantry and cavalry exercises. Then he went through Asia Minor to Syria, where he climbed Mount Cassius. In 130 AD, Hadrian visited Jerusalem, which had been in ruins since 70 AD, and decided to build a city on this site called Colonia Aelia Capitolina, and on the site of the temple of Solomon to erect a temple in honor of Jupiter Capitoline. Then the emperor's way lay to Egypt, where his favorite Antinous drowned in the Nile. On November 21, 130, Hadrian visited the monument of the singing Memnon. The return trip passed through Syria and Asia Minor. When Hadrian was about to leave Athens for Rome, he received news of a new Jewish uprising, which was suppressed with great difficulty.

Coin with the face of Hadrian, 2nd century AD.

The new emperor paid special attention to the economic development of the provinces. Theaters and libraries were built all over the country, and cities were decorated with statues. In Rome, the Pantheon was built, the mausoleum of Hadrian (now called the Castel Sant'Angelo), the Temple of Venus and Roma, the famous villa was built in Tibur, and a canal was built from Stymphalo to Corinth. Hadrian highly valued Greek culture, encouraging arts, poetry, and philosophy. The emperor decorated his beloved city of Athens with magnificent buildings, including, for example, the temple of Olympian Zeus. He also took care of strengthening the north-western borders of Germany and Britain, where he erected the so-called Hadrian's Wall (in 122) and reinforced the troops. In Italy, Hadrian completed the project begun by Claudius to drain Lake Fucino. He created a council for his own person. Italy was divided into 4 parts with four imperial consuls, and only Romans were appointed to state posts.

Hadrian's last major activity was the codification of Roman law, which was carried out in collaboration with the lawyer Salvius Julianus. In 138, the emperor became very ill. Suffering from an illness, he took a strong dose of medicine and died in Baja on July 10, 138, leaving Antoninus Pius, whom he had adopted, as his heir. Before he died, he wrote an epitaph for himself:

"Trembling soul, gentle wanderer Guest and friend in a human body, Where do you now wander, Weakened, cold, defenseless, Unable to play as before?"

Under Hadrian, a powerful system of defensive fortifications was built. The most famous is Hadrian's Wall in Britain, with a length of 117 km. Special attention was also paid to the Rhine and Danube borders: fortresses, watchtowers, camps were built, protected by walls and connected by roads, so that in the event of a barbarian invasion, reinforcements could quickly arrive. A moat and road were built on the barbarian side, and a road was built on Roman side.

In this situation, some of the legions were increasingly entrenched on the borders and became less mobile. Under Hadrian, the legions began to accept local residents of the provinces, which until yesterday were considered barbarians. In addition, a new light unit appeared, consisting of the local militia-Numeri, armed with their own weapons. The share of immigrants from Italy in the army has decreased.

During this period, the Roman army was feared by the barbarians and they did not dare to break the border, and Hadrian's reign was calm, except for minor border conflicts. The main military campaign of Hadrian was the suppression of the Jewish revolt of 131-135 AD. Tribesmen from Egypt and Libya joined the rebels in Palestine. For a long time, the Roman army could not succeed, the rebels captured Jerusalem, fortified many fortresses and hills. The best general of the time, Sextus Julius Severus, was sent from Britain to suppress the uprising. Avoiding major battles, the North surrounded and starved one fortress after another. As a result, Jerusalem was captured and destroyed, and the leader of the rebels, Bar Kokhba, was killed. In the battles alone, 580,000 Jews were killed, 985 villages and 50 fortresses were captured. Hadrian did not accept the triumph from the Senate, but accepted the title of emperor for the second time from the army. After this uprising, there were no more major demonstrations in Palestine. The Jews of the Empire were even more heavily taxed. 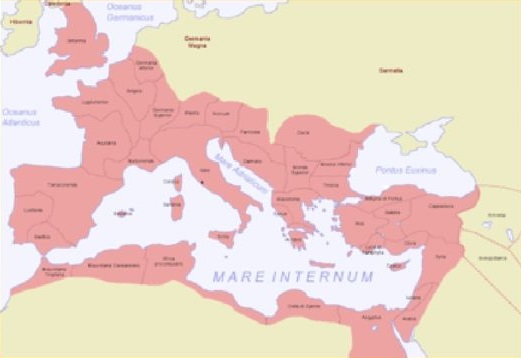 Borders of the Empire during the reign of Hadrian