Ala (from Lat. ala - "wing") - a mounted auxiliary unit of the Roman army, in later times usually consisting of allies (ala sociorum). The name comes from the traditional use of legion cavalry on the flanks. Analogs of al were first used under Caesar, during his Gallic campaigns. Each ala in his army consisted of 10 turmas. An ala with 500 horsemen and 504 horses, not counting the prefect, was called a quingenaria, and with 1,000 horsemen and 1,090 horses, it was called a milliaria.

Ala quingenaria was originally divided into 16 turmas of 3 decurias each, which included 10 horsemen and one officer. The Ala milliaria consisted of 24 turmas under the command of a prefect (praefectus alae). According to Gigin, the fortified camp could contain "4 alae milliariae" and "5 alae quingenariae".

The rider of Ala was called alaris (alarius). There were also Alas serving in the eastern part of the Empire, consisting of war camels (alae dromedariae). 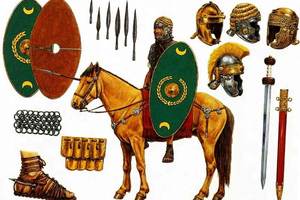 Artistic representation of the rider 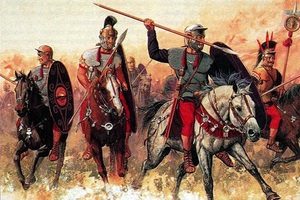