Food plays a special role in a person's life: without it, he simply cannot live. Ancient Roman food was very diverse and had a class character. In ancient times, people who lived on the Apennine Peninsula, everywhere used to eat thick porridge from spelt. Gradually, it gained importance as the food of the poor. They also consumed foods such as cabbage, onions, garlic, leeks, beets, and string fruits. Oddly enough, these peoples rarely consumed meat. Modern food is impossible to imagine without bread. Bread in Ancient Rome was different in composition, and each of its individual types was intended for different segments of the population. Bakers were not known until at least the second century BC, because women or slaves were engaged in baking bread. Everything changed after the Syrian War (192 BC -188 BC). The Romans got a taste of Eastern life, and accordingly, many things changed in their lives: the time of meals, the number and size of meals, etc. 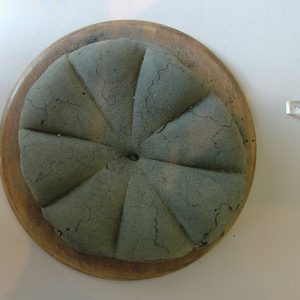 Round bread with cuts to make it easier to break. Pompeii. Oven in a public bakery in Pompeii 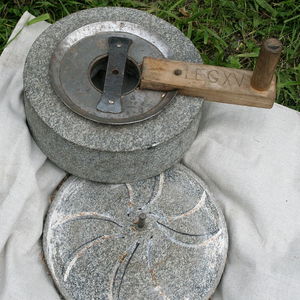 Until the second century BC, the Romans ate only 2 meals a day: at breakfast, which consisted of bread with wine, milk, eggs, olives, cheese, raisins, etc., and at lunch, which consisted of the same thing as breakfast. Now they began to eat 3 meals a day: ientaculum (breakfast), prandium (lunch) and cena (something like our dinner), and the latter was given special preference. Cena consisted of 3 parts: appetizers, prices, and dessert. The appetizer (promulsis) consisted of salad, eggs, various shells and fish with a savory sauce. The main goal of this part is to whet your appetite. During dessert, cookies, fruit, and various treats were served. To implement all this, a large servant was kept, who was engaged in cooking for cena. 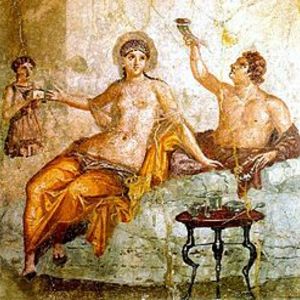 Feast scene. Fresco from Pompeii, 1st century. According to some scholars, the banquet scenes in the Pompeii reliefs depict women of easy virtue (judging by their clothing, or rather the lack of it, and poses)

Among the numerous food items, the Romans primarily valued fish. Fish was expensive, and therefore popular among the aristocrats. The most expensive fish was considered krasnoborodka. Next came the following species: sea eel, flounder. Less appreciated: common eel, sea pike – they were popular among ordinary, poor citizens. Also, you can not ignore shellfish: murex (edible snail), shells, oysters. They ate not only fresh, but also salted fish. Salted, mostly, sturgeon, tuna. Salted fish was used as a snack, so it was served seasoned with olive oil and vinegar. 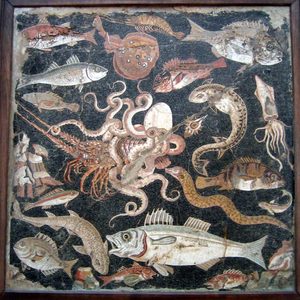 Mosaic "Inhabitants of the sea". Pompeii.

It is worth paying special attention to the bird that was served to the table. The most interesting thing is that the Romans used birds such as peacock, stork, crane. Partridges, grouse, thrushes, and pheasants were also put on the table. Naturally, this was only typical for an aristocratic table. Ordinary residents ate yard birds: chickens, ducks, but they rarely put them on the table, as it was said earlier. In addition to all of the above, it is necessary to say about those animals that the inhabitants of Ancient Rome ate. Aristocrats, most often, ate hares, they were raised in special menageries. They also consumed deer, fallow deer, roe deer, rabbits, and sheep. The most important dish was considered to be a domestic or wild boar. 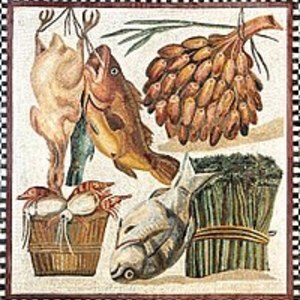 Vegetables include lettuce, cabbage, turnips, rutabagas, artichokes, pumpkins, watermelons and melons, cucumbers, sorrel, garlic, and onions. Mushrooms were also eaten: mosses, porcini mushrooms and truffles (with the exception of black ones, which were unknown to the Romans) Legumes formed the basis of the peasant table in Ancient Rome: peas, lentils, etc. 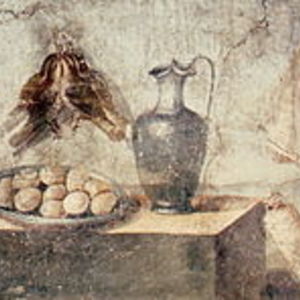 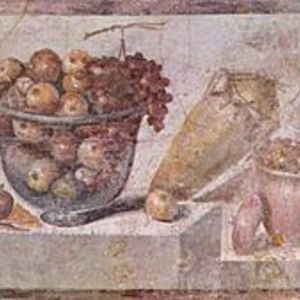 Bowl of fruit. Fresco from the house of Julia Felix, Pompeii

You also need to say a few words about fruits. Apples, pears, grapes, olives, dates were always on the Roman table. No preparation of an ancient dish is complete without the use of seasonings. Olive oil played a big role: it served as a seasoning for dishes, and without it it was impossible to prepare food for the future. Also ancient seasonings include: salt, vinegar, pepper. Dill, anise, mustard, and thyme seeds were used for cooking. During the time of the Empire, ginger and cinnamon were added to food. Cookies were prepared in various forms: in the form of animals, birds, putting honey, raisins, nuts, etc. inside. Such cookies were distributed to guests at the table and taken as a gift home.

2. F. F. Velishsky "Life of the Greeks and Romans"