Germani was a group of related tribes that belonged to the Indo-European language family and occupied the territory of modern Denmark, the southern coast of Norway and Sweden. By the 5th century AD, Germanic tribes had settled the vast area between the Rhine and Vistula from west to east, the Danube in the south, and the Dnieper and Maeotian Sea in the southeast.

The term "Germans"is used to refer to peoples who spoke mainly Germanic languages, living in the period from the Bronze Age to the end of the Great Migration era. By the 7th century, as a result of migrations, the ancient Germans mixed with other peoples and took part in the formation of many other European nations. 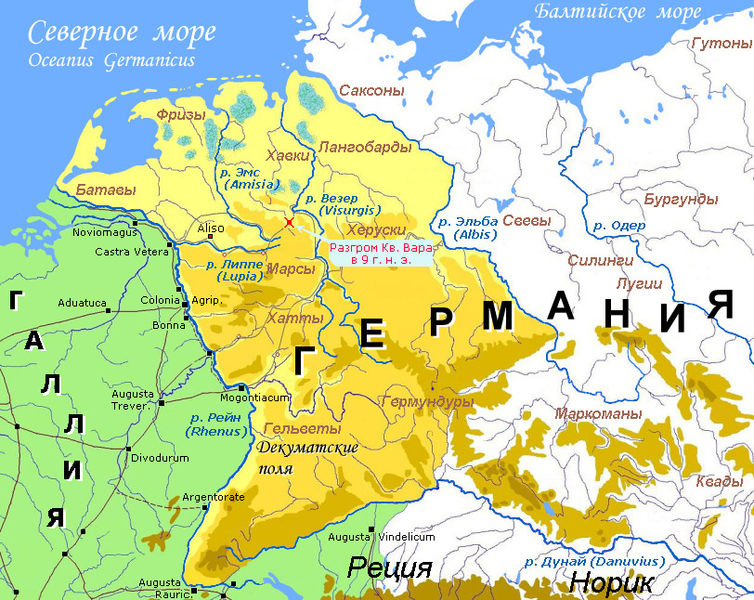 Map of Germany in the early 1st century AD.

The Germans as an ethnic group were formed in northern Europe from Indo-European tribes that settled in the area of Jutland, Lower Elbe and southern Scandinavia. The Romans began to distinguish the Germans as an independent ethnic group only from the 1st century BC. The view that the beginning of the expansion of Germanic tribes into neighboring areas should be dated to the beginning of a new era is currently considered erroneous. It is known that tribal groups speaking the early dialects of the then common proto-Germanic language began to move south from the territories of Scandinavia and Jutland from the 2nd century BC to the 3rd century AD. the Germans attack the northern borders of the Roman Empire along the entire front and in the 5th century during the Great Migration of Peoples destroy Western Roman Empire, spread across Europe from England and Spain to the Crimea and even on the coast of North Africa.

The ancient world for a long time knew nothing about the Germans, separated from them by Celtic and Scythian-Sarmatian tribes. The first mention of Germanic tribes was made by the Greek navigator Pytheas of Massalia. Marseille), who made a trip to the shores of the North Sea and, presumably, the Baltic Sea during the time of Alexander the Great (2nd half of the 4th century BC).

The Romans faced the Germans during the terrible invasion of the Cimbri and Teutons (113-101 BC), who, during the migration from Jutland, devastated pre-Alpine Italy and Gaul. Contemporaries perceived these tribes as hordes of northern barbarians from unknown distant lands. In the descriptions of their customs made by later authors, it is difficult to separate fiction from reality.

Gold Roman coin (aureus) of the Emperor Domitian (81-96 AD). The reverse side shows a captured German on a shield.

The wars of the Roman Empire with the Germanic tribes began from their earliest contact and continued with varying intensity throughout the first centuries AD. The most famous battle was the battle of the Teutoburg Forest in 9 AD, when the rebellious tribes exterminated 3 Roman legions in central Germany. Rome managed to subdue only a small part of the German-inhabited territories beyond the Rhine, in the 2nd half of the 1st century AD The Empire went on the defensive along the line of the Rhine and Danube rivers and the Upper German-Rhaetian Limes, repelling German raids and making punitive campaigns in their lands. Raids were carried out along the entire border, especially the Danube, where the Germans settled on its left bank during their expansion to the south and east. 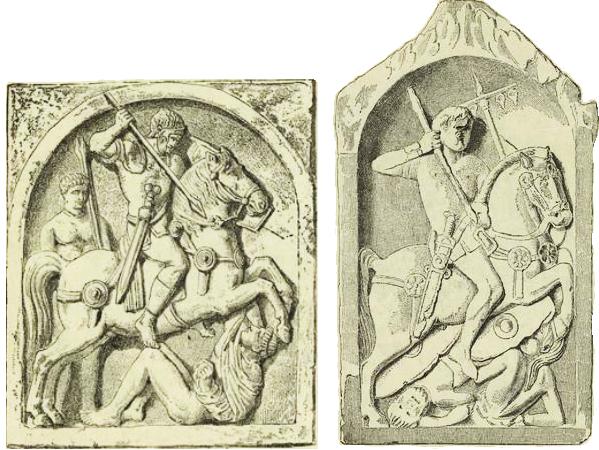 Bas-relief with German horsemen in the service of Rome. Found in Mainz, Germany. 1-2 century AD

In the 250s and 270s, the Roman-German wars called into question the very existence of the empire. In 251, the Emperor Decius died in a battle with the Goths who settled in the northern Black Sea region, followed by their devastating land and sea raids in Greece, Thrace, and Asia Minor. In the 270s, the empire was forced to abandon Dacia (the only Roman province on the left bank of the Danube) due to the increased pressure of Germanic and Sarmatian tribes. Due to the pressure of the Alemanni, the Upper German-Rhaetian Limes was abandoned, and the Danube-Iller-Rhenish Limes became the new border of the empire between the Rhine and the Danube. The empire held out, successively repelling barbarian attacks, but in the 370s, the Great Migration of Peoples began, during which Germanic tribes penetrated and gained a foothold in the lands of the Roman Empire. 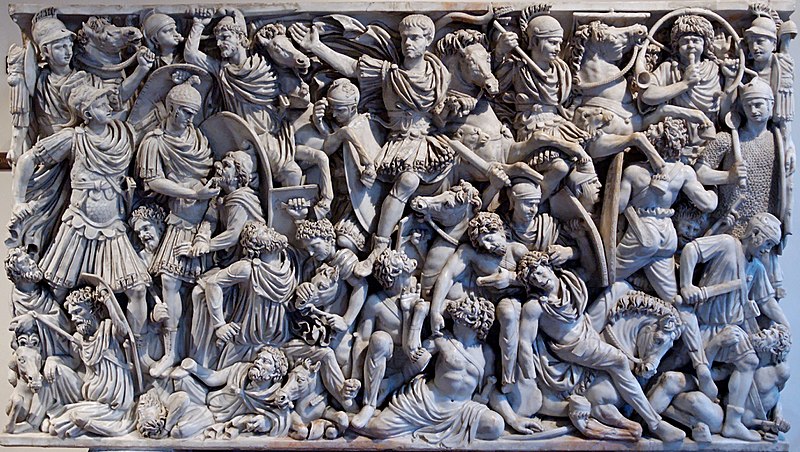 Battle of the Romans with the Germans circa 252. It is assumed that the battle of Roman troops with the Goths is depicted.