Homer (Greek :μμηρος ) was an ancient Greek poet, the creator of the epic poems Illiad and Odyssey. There is no news about his life, however, as well as about the time of his life. The most common version is the VIII century BC. 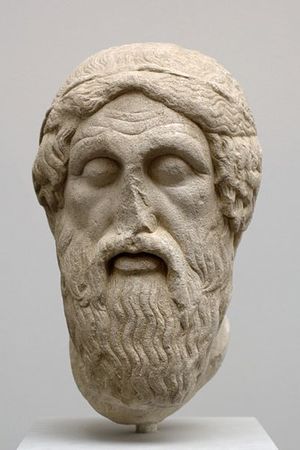 It is clear, however, that the Iliad and Odyssey were written much later than the events described in them, before the sixth century BC, when their existence was reliably recorded. The chronological period in which modern science localizes Homer's life is approximately the eighth century BC. According to Herodotus, Homer lived 400 years before him, which indicates a date of 850 BC. An unknown historian in his notes indicates that Homer lived 622 years before Xerxes, which indicates 1102 BC. Other ancient sources say that he lived during the Trojan War. At the moment, there are several dates of birth and evidence for them.

Homer's birthplace is unknown. According to the epigram of Gellius, seven cities in the ancient tradition argued for the right to be called his homeland: Smyrna, Chios, Colophon, Salamis, Rhodes, Argos, Athens, and variations of this epigram are also called Kimu, Pylos, and Ithaca. According to Herodotus and Pausanias, Homer died on the island of Ios in the Cyclades archipelago. Probably, the Iliad and Odyssey were built on the coast of Asia Minor, Greece, inhabited by Ionian tribes, or on one of the adjacent islands. However, the Homeric dialect does not provide accurate information about the tribal affiliation of Homer, since it is a combination of Ionian and Aeolian dialects of ancient Greek. There is an assumption that his dialect is one of the forms of poetic koine, formed long before the estimated time of Homer's life.

Traditionally, Homer is depicted as a blind man. It is most likely that this idea does not come from the real facts of his life, but is a reconstruction characteristic of the genre of ancient biography. Also, the name "Homer" according to one of the versions of his reading means "blind" (μ μῆ ὁρῶν). Since many prominent legendary diviners and singers were blind (for example, Tiresias), according to the ancient logic that connected the prophetic and poetic gift, the assumption of Homer's blindness looked very plausible. In addition, the singer Demodok in "Odyssey" is blind from birth, which could also be perceived autobiographically.

There is a legend about a poetic duel between Homer and Hesiod, described in the work "The Contest of Homer and Hesiod", created no later than the third century BC, and, according to many researchers, much earlier. The poets allegedly met on the island of Euboea at the games in honor of the deceased Amphidemus and read each of their best poems. King Panedes, who was the judge of the contest, awarded the victory to Hesiod, because he calls for agriculture and peace, and not for war and carnage. At the same time, the audience's sympathies were on the side of Homer.

In addition to the Iliad and Odyssey, a number of works are attributed to Homer that were undoubtedly created later: the Homeric Hymns (VII—V centuries BC, considered along with Homer to be the oldest examples of Greek poetry), the comic poem Margit, etc. The Byzantines attributed to Homer the authorship of about two dozen poems (including Cyclic poems), as can be seen, for example, from the revision of the Iliad by Constantine Hermoniacus.

The meaning of the name "Homer "(it is first found in the seventh century BC, when Callinus of Ephesus called him the author of The Thebaid) was tried to explain in antiquity, the variants" hostage "(Hesychus)," following "(Aristotle) or" blind man "(Ephor of Cymus) were proposed,"but all these options are as unconvincing as modern proposals to attribute to it the meaning of "summator "or" accompanist". <...> This word, in its Ionian form oμηρος — is almost certainly a real personal name."