It originated from the Greek game episkiros, which the Romans adopted, slightly modified the rules and renamed "harpastum" – "small ball game".

Harpastum remained popular for 700 years and even developed into a form of military training for legionnaires. Julius Caesar, who supposedly played it himself, introduced harpastum to keep his soldiers fit.

It was played with a small but heavy ball, similar to a follis or paganicus (a ball stuffed with down). The games were played on a rectangular field with defined borders, divided into two equal halves by a central line. Players had to pass the ball between two posts. From 5 to 12 people from each side took part in the matches.

Harpastum vaguely resembled football or rugby and was characterized by cruelty. "The players are divided into two teams. The ball is placed on a line in the center of the court. At both ends of the court, behind the backs of the players, each of whom is standing in his assigned place, draw another line. For these lines, you are supposed to bring the ball, and perform this feat manually, only pushing the players of the rival team, " - this is the description of harpastum, given by a contemporary of Ancient Rome. The legs were hardly used in the game. An important rule of harpastum was that only the player with the ball was allowed to block. This restriction led to complex combinations of passes, tactical schemes, and clever tricks, and players were assigned to the field according to special roles.

One of the most interesting pictorial sources on Harpastum is the Roman mosaic from Ostia. It shows the ball itself and players in red tunics, without armor, and one of the players is clearly not belted. However, there is a version that the mosaic depicts physical education classes in a Roman gymnasium. 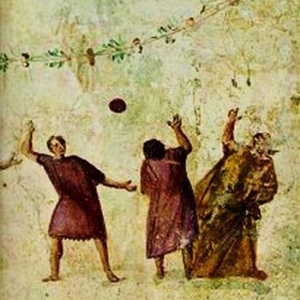 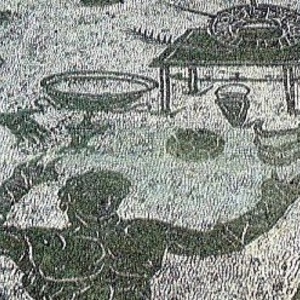 Many ancient Greek writers note that the Roman harpastum was borrowed from the Greeks, who also had a ball game called episkyros — ἐπίσκυρος-literally - "common ball"). A marble bas-relief from the National Museum of Archaeology in Athens tells the story of football. It shows a Greek athlete juggling a ball on his hip and demonstrating his skills to young people. 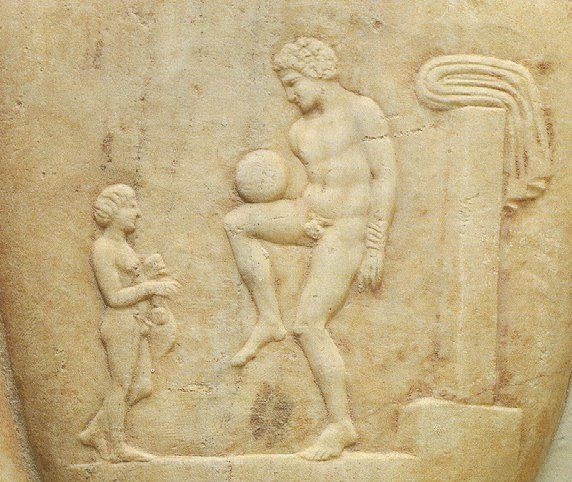 Game of the Spartans in Episkyros, 5th century BC, Athens State Museum of Archaeology

There are references to Roman boys playing ball in the streets. Cicero describes a court case in which a man was killed because a barber was hit by a ball. This is probably the first historically recorded case of a person dying while playing soccer.

Athenaeus wrote about harpastum: "Harpastum, also called Faininda, is my favorite game. The effort and fatigue that accompany playing with the ball, the cruel twisting and breaking of necks are great." Antiphen's other words: "Damn, my neck hurts." He describes the game this way: "He [the player] grabs the ball, passes it to a teammate while dodging another, and laughs. He shoves it at the other person. He lifts his companion to his feet. All the while, the crowd outside the pitch is shouting. Far away, right behind him, overhead, on the ground, in the air, too close, pass to a bunch of players." 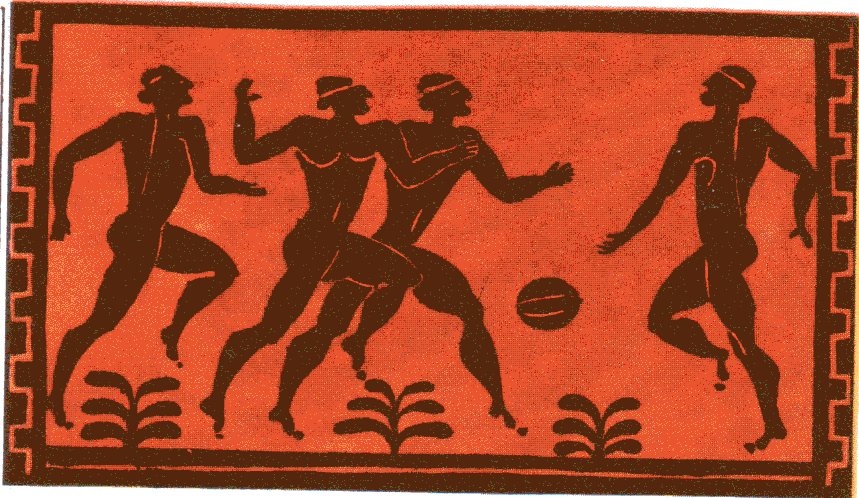 It is also believed that the Romans brought harpastum to the British Isles during the expansion period. True, earlier uncomplicated ball games already existed there. There is evidence of a harpastum match between the Romans and the inhabitants of Britain-Britons and Celts. The Britons proved to be worthy students: in 217 AD, they defeated a team of Roman legionnaires for the first time. 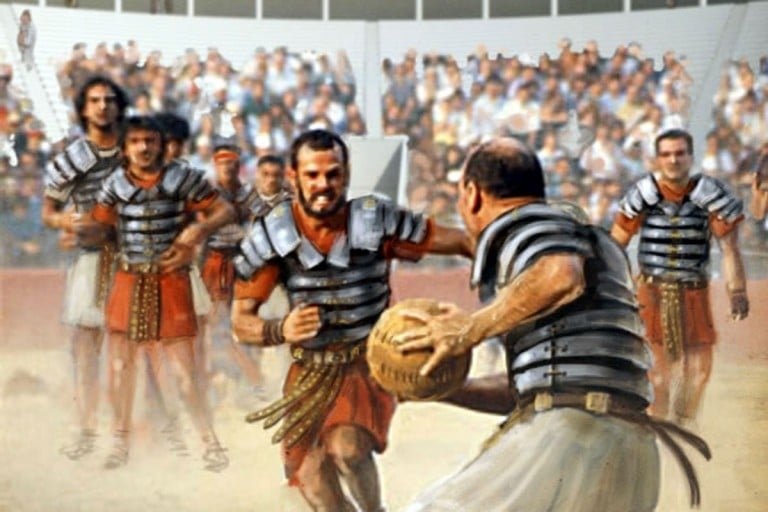 Despite the Roman expansion, harpastum eventually disappeared from the British Isles, and it is very unlikely that this game could have given an impetus to the development of English "mob football". However, it was the Roman Gaspartum that was the immediate predecessor of European football.

The oldest ball found, the most similar to a soccer ball, is a bladder ball that no longer belongs to the ancient period. The ball dates from 1540-1570 and was found in the bedroom of Mary I, Queen of Scots. 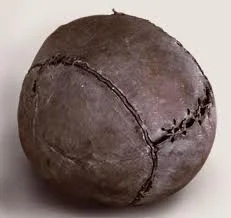 A variation of the rules from Legio X Fretensis

We recommend that you play without armor to reduce injuries. The ball is played by throwing it up from the center of the field. According to the rules that have come down to us, you can not block a person without the ball by direct contact, but you can attack a player with the ball. It is allowed to pass the ball to teammates. A goal is considered if a member of your team puts the ball on the ground in the opponent's control zone (did not throw it!). If a player is knocked down and drops the ball in the control zone – there is no point, the ball goes to the opponent. It is allowed to pass to the control zone, but if the ball just fell to the ground, this also does not count as a goal and does not give a point, and the ball goes to the opponent. If the players fall into a pile of malu and do not disperse within 30 seconds, the ball is played again. 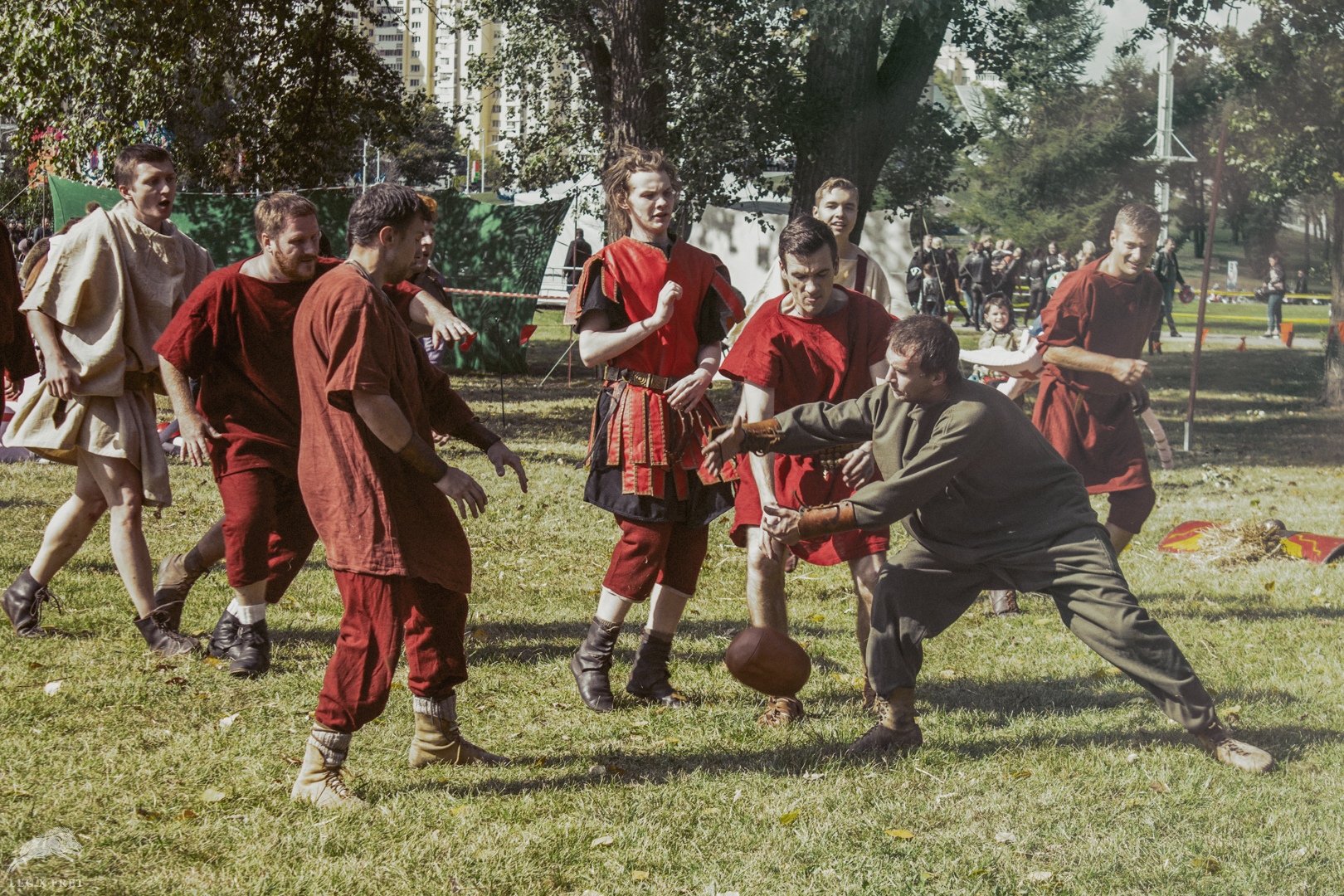