Legio XVIII (Eighteenth Legion) - a Roman legion formed by Caesar's successor, By Octavian Augustus in 41 or 40 BC.E. to fight the son of Pompey the Great, Sextus Pompey, who seized the island of Sicily and from there threatened the communications for the supply of grain to Rome, and therefore the power of Octavian. In 41 BC, the armies of both Caesar and Pompey the Great had legions with this number. Most likely, Caesar's 18th Legion perished along with other legions under Gaius Scribonius Curio in Africa, and Pompey's 18th Legion was disbanded after his defeat. There is a version that the 18th Legion of Octavian was created from the legion of Octavian himself and the legion with the same number that fought on the side of Mark Antony.

Legion of Honor nicknames: is unknown.

2. Centurion Marcus Cellius, who died in the Battle of Teutoburg, but a monument from his grave is kept in a museum in Xanthe, Germany. 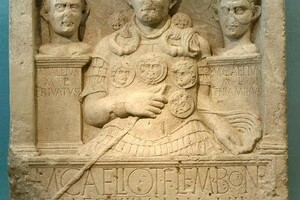 Tombstone stele of Marcus Caelius, centurion of the XVIII Legion, found in the vicinity of Vetera. The stele is one of the most famous symbols of the Roman defeat in the Teutoburg Forest. Archaeological Museum, Bonn. First half of the 1st century AD 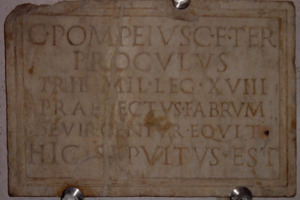 Tombstone of the military tribune Gaius Pompeius Proculus, third son of Gaius, Tribunus Militum of the 18th Legion, Prefect of Fabrum and Severus of the Cavalry. Augustinian, Epigraphic Museum, Diocletian's Baths, Rome. First half of the 1st century AD

3. Nico Roymans. From the Sword to the Plough. Three Studies on the Earliest Romanisation of Northern Gaul. — Amsterdam University Press, 1996.