Marcus Licinius Crassus (115/114 BC-53 BC) was a Roman nobleman who belonged to the Plebeian Lucinii family. His ancestors included several consuls, praetors, and censors.

Mark was the third child of a boy in the family, but at the same time received a traditional education for a Roman aristocrat, with an emphasis on preparing for military service. When his father was governor in Distant Spain (96-93 BC), Mark went with him. There, he helped him in business, and he got the necessary contacts and connections that will help him a little later. After returning to Rome with his father, he took part in the Allied War of 91-88 BC in a place with his middle brother, since the older brother had already died..

Mark combined participation in the war, with the activity of a lawyer, successfully speaking at court sessions in Rome. But his career was interrupted by the civil war between Gaius Marius and Lucius Cornelius Sulla, which began in 88 BC. Marcus ' father supported Sulla. It cost his father and middle brother their lives, and Mark himself barely escaped to Spain in 87 BC. Here he hid until 84 BC, after which he began to gather a group of supporters who were opposed to Gaius Marius and his supporters. After that, Crassus, at the head of his detachment, joined the landing in Italy in 83 BC. Lucius Cornellius Sulla. During the civil war between Sulla and Marius, Crassus fought on Sulla's side. Here he encountered another prominent supporter and aide of Sulla, Pompey, with whom he began a rivalry because Pompey was younger than him and Sulla valued Pompey, not Crassus. 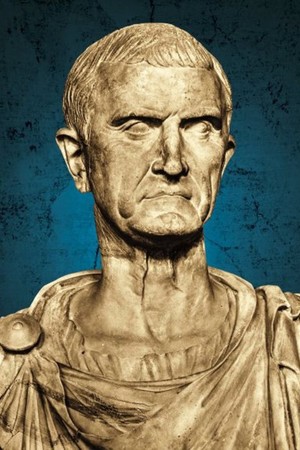 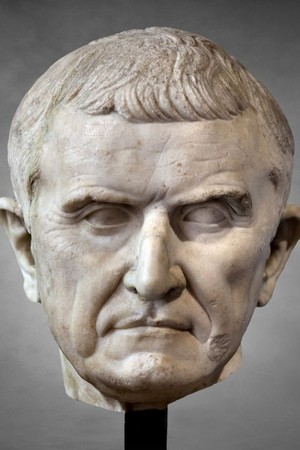 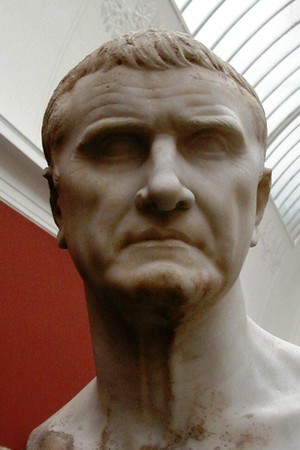 Bust of Crassus in the New Glyptothek of Karlsberg in Copenhagen

Plutarch believes that the fault was that " Crassus lacked experience, and the beauty of his exploits was ruined by the evil forces that possessed him by nature — greed and avarice”" Plutarch. Crassus. 6.

However, when Sulla was alive, the rivalry between Pompey and Crassus was smoothed out by his participation. Surprisingly, but a fact. Despite the growing rivalry between Pompey and Sulla after his death, the issue of military action, as between Sulla and Gaius Marius, did not come between them. In the course of the proscriptions that followed Sulla's victory in the civil war, Marcus Crassus was able to make a huge fortune for himself, thus becoming one of the richest men in Rome.

Crassus also became rich because, unlike most senators who invested their finances in land, he invested them in buying real estate; selling slaves; paying off taxes from the provinces; gold mines outside Italy and lending money. By lending money, Crassus was expanding his political influence in Rome. With the help of his wealth, Crassus was able to make his way to the Senate and become a member of the Senate, that is, a senator.

Crassus was able to quench his thirst, to prove himself as a military commander, like Pompey, by recruiting several legions at his own expense and taking an active part, in fact, after a series of defeats of his predecessors, leading the Roman forces that were sent to suppress the revolt of Spartacus (73-71 BC) in Italy. In just six months, he was able to defeat the rebels (by the spring of 71 BC), but the laurels of the final winner of the Spartacus uprising were attributed to Pompey, who returned from Spain and defeated the remnants of the gladiator forces. This was another stone in the confrontation between Pompey and Crassus.

But the people forced Crassus and Pompey to try things out, and they were both elected consuls in 70 BC. During their joint consulship, the following reforms were carried out: the People's tribunes were restored to their former powers, judicial reform was carried out, and the censor magistracy was revived. After their consulship, both consuls, contrary to tradition, did not go as provincial governors, but became private individuals. Due to the lack of sources, we do not know what Marcus Crassus did between 69 and 65 BC. e. In 65 BC, he was a censor, then went back into the shadows until 60 BC. When the 1st triumvirate was created, which included Marcus Crassus among the triumvirs, in addition to Caesar and Pompey.

Here is how the Roman historian Lucius Annaeus Florus writes about this in his epitomes (II, 13, 1): "So, Caesar sought to gain political influence, Crassus — to increase it, Pompey — to retain it. Equally obsessed with power in the state, they willingly joined forces to seize it.”

The alliance was later extended at a meeting of the triumvirs in 56 BC in the city of Luca (now the city of Luca in Italy). Following the meeting at Luca, Crassus received a second consulate the following year (55 BC) and a viceroyalty in Syria, following the consulate. After the consulship, Crassus left for his province, preparing for a military campaign against Parthia, Rome's eastern neighbor and opponent.

A trip to Parthia

Here is what Plutarch tells us about the plans of Marcus Crassus: “…Becoming immensely proud and losing his mind, he no longer limited the field of his success to Syria or the Parthians, called the campaigns of Lucullus against Tigranes and Pompey against Mithridates childish amusements, and his dreams extended to the Bactrians, the Indians and the sea beyond them...” (Plutarch. Crassus, 16).

This military campaign against the Parthians was unsuccessful for Crassus, as in the battle of Carrhae (now the city of Harran, Turkey) in May 53 BC.e. he was defeated and killed.

There are two versions about the death of Krasus: the first is that he was killed in negotiations and molten gold was poured into the mouth of the dead Crassus, mocking his greed. (Dio Cassius, XL, 27. Roman History)

Second, according to Plutarch, Crassus was also killed in negotiations, and his head and right arm were sent to Orodes II (king of Parthia), who at that time reconciled with Artavasdes (king of Armenia and a former ally of Crassus) and feasted with him in the Armenian capital Artashat. The head was carried on stage in front of Artavasdes, Orodes, and the courtiers during a theatrical production of Euripides ' tragedy, The Bacchantes (it was carried out, wearing a thyrsus, by an actor who played the mother of Pentheus, who was madly running around with her son's head).

11. Livshits G. Socio-political struggle in Rome in the 60s of the first century BC and the Catiline conspiracy. Minsk: BSU Publishing House, 1960, 208 p.

16. Lyubimova O. Letter of Crassus on the challenge of Pompey and M. Lucullus against Spartacus: time and circumstances of writing // Bulletin of the Humanities University. 2013, No. 2, pp. 73-84.

27. Plutarch. Comparative biographies — - Moscow, 1994. the same can be applied to Pompey. source