The triumvirate (Latin: triumviratus — "union of three men") is a political agreement, an alliance of influential political figures and generals in Rome during the civil wars of the first century BC, aimed at seizing power in the state.

Ancient authors did not agree on the name of the first triumvirate and its members: Suetonius and Vellius Paterculus called this union societas( partnership, association), Titus Livy called them conspiratio (secret agreement, conspiracy, conspiracy). A contemporary of the events, the Roman scholar-encyclopedist and writer of the first century BC Varro referred to this union as the "Three Chapters", devoting his entire pamphlet to them. Today, in modern dictionaries, the term “triumvirate " is interpreted as we gave it at the beginning of our article.

Members of the first triumvirate: 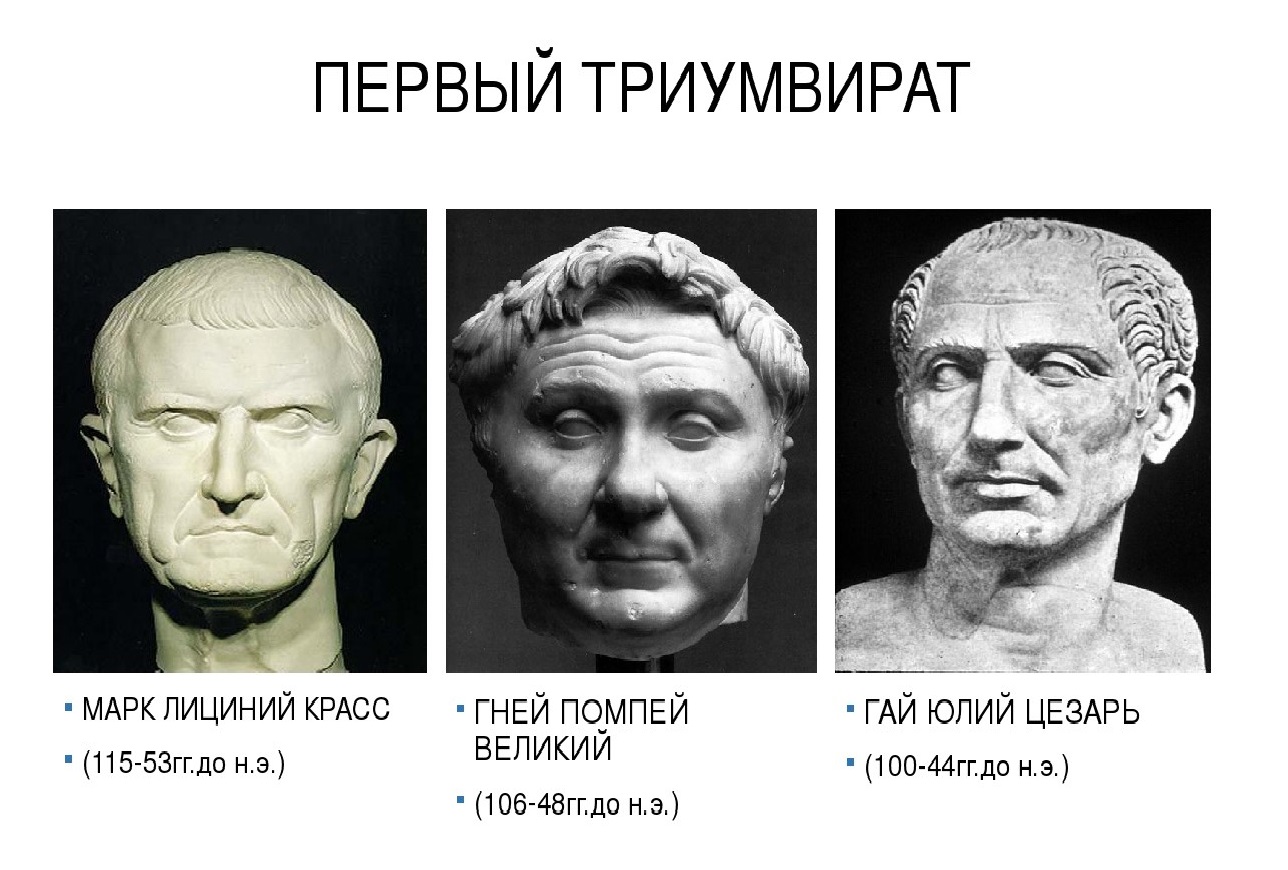 Creation of the 1st Triumvirate

There is no consensus on the date of creation of the triumvirate due to its secret nature, neither among ancient authors nor among modern ones.

Plutarch, Appian, Livy and dio Cassius make the assumption that the triumvirate was formed in the summer of 60 BC, that is, until the election of the consuls for the next year, Suetonius says that the triumvirate was formed after elections in the autumn of 60 BC, and Valley Paternal attribute its formation to 59 BC Contemporary of the events of Cicero in one of his letters to Titus Pomponius Attica hints about the creation of the Union in December of 60 BC

In any case, the first triumvirate emerged in 60 BC, when the three political figures of Ancient Rome (Pompey, Crassus and Caesar) were not strong enough to seize power in the state alone. Therefore, they were forced to make such an alliance. The first one was called a little later, when the second triumvirate appeared, and its members officially called themselves triumvirs.

Both modern and ancient agree that the idea and organization of such a union belonged to Gaius Julius Caesar. Each of the members of the triumvirate pursued their own goals by joining this union.

Goals of the 1st Triumvirate participants:

Interestingly, none of the members of the triumvirate had a large number of supporters among the senators, but each of them had support among the plebs and horsemen. Pompey was especially popular because of his veterans in the national assembly. 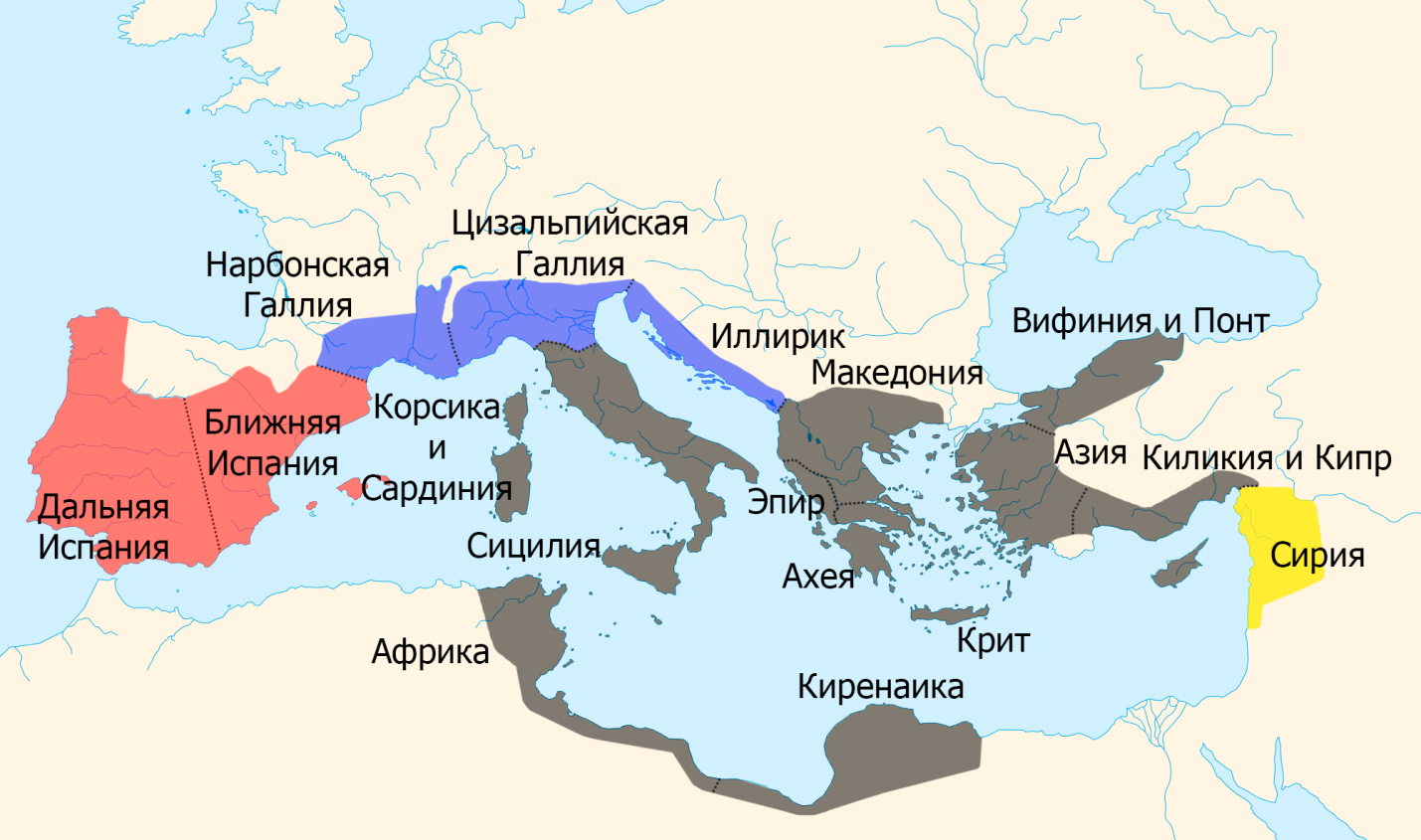 Activities of the 1st Triumvirate

In 59 BC, Caesar, with the support of Pompey and Crassus, was elected consul. The second consul was a supporter of the Senate, Marcus Bibulus, with whom Caesar argued and fought all the time of the consulate. Caesar still managed to force Bibulus to actually relinquish his powers in protest of his colleague's actions. There was even a joke among the people that it was the year of the Consuls Gaius and Julius. (Suetonius. Caesar. 20).

By putting pressure on the Senate and barely assembling it, Caesar was able to implement a number of laws: the law on the division of land among poor citizens and the law on the withdrawal of colonies; and the Senate had to swear that these laws would be implemented. For Pompey, a law was passed to endow all his veterans with land, and his orders in the east, which he gave while there as commander-in-chief in the 3rd Mithridatic War, also became legally valid. In favor of Crassus, Caesar was able to reduce by a third the purchase amount of the tax from the province of Asia. For himself, Caesar achieved the administration of Cisalpine Gaul, Narbonne Gaul and Illyricum for a period of 5 years as proconsul.

After resigning his consulship and receiving the rank of proconsul in 58 BC, Caesar left for Gaul to prepare and carry out the Gallic War. Pompey, remaining in Rome as a member of the agrarian commission to which he had been assigned during Caesar's consulship, proceeded to endow his veterans with land. There was a conflict between Pompey and the tribune of the people, Clodius, who remained in Rome to represent Caesar's interests. Caesar managed to smooth over the contradictions between Clodius and Pompey, and after a general reconciliation, the politicians were able to extend the triumvirate for another 5 years at a meeting in Luke in 56 BC.e.

In Luke, they decided the following: Pompey and Crassus become consuls in 55 BC, and after that they are sent as governors to Spain (Pompey) and Syria (Crassus) for a period of 5 years, and Caesar retains the right to govern in Gaul for an additional 5 years. So they did. After the consulship, Crassus left for Syria and began to prepare for a military campaign against Parthia, Caesar went to Gaul to continue the Gallic War, and Pompey, remaining in Rome, sent his subordinate to lead Spain and continued to participate in the political administration of Rome.

Collapse of the triumvirate

Two tragic events led to the collapse of the triumvirate:

After these deaths, the triumvirate ceased its activities and disbanded. The remaining members of the triumvirate, Caesar and Pompey, gradually began to prepare for a war with each other for power. This later led to a civil war that ended in Caesar's victory.

4. Titus Livy. Periochs. Excerpts from his "History from the foundation of the City".