Popina is an ancient Roman drinking establishment. Popins were small rooms where food (olives, bread, and hot dishes) and wine were served, and music was often played. Despite the external similarity with kaupona, in fact, popina was very different from it, since it did not provide visitors with overnight accommodation, and therefore was considered a less decent institution. In written sources, Popina was often described as a place for drunks, fights and songs. The popins were mostly members of the lower class — slaves, freedmen, and foreigners. Food was consumed most often standing up, only sometimes visitors were given the opportunity to eat at tables on chairs.

Prostitutes often offered their services in Popiny. Inscriptions from Pompeii and testimonies from Roman authors suggest that" barmaids "and" waitresses", and sometimes the hostesses of the establishment, also engaged in prostitution. 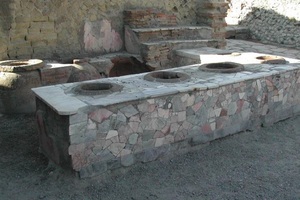