Thermopolium (Latin: thermopolium, from other Greek: теплыйερμός "warm" and πωλέω "sell")-a type of ancient Roman eatery where hot food and wine with spices were served. They serve as an analog of modern inns, pubs and bars.

Thermopolies were most often small rooms that faced the street with a counter. Dishes were heated using several large vessels (Latin dolium) with water or large vats. Interestingly, they were built directly into the counter, which vaguely resembled modern bar counters. Food was prepared and heated on the fire under the vessels. The dishes that could be served in thermopolia were most likely extremely simple: peas, beans, lentils. Wine mixed with hot water could also be offered as a drink. Visitors could eat both standing and sitting. 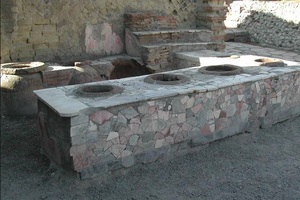 Clearing out props in the thermopoly. Pompeii. 1st century AD 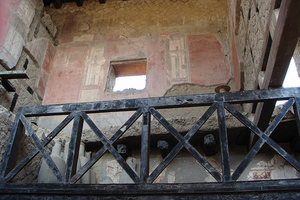 In Pompeii, huge richly decorated thermopolia with seating areas and a kind of hotel with guest rooms, similar to cowpona, were discovered .

Thermopolies were widespread throughout the Roman Empire. Such establishments are found in Ostia, Herculaneum, Pompeii. 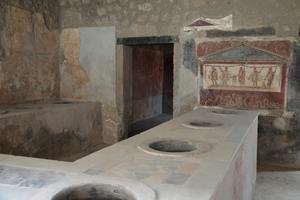 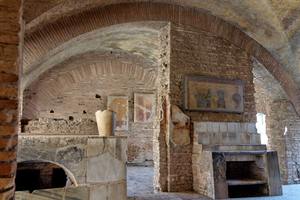 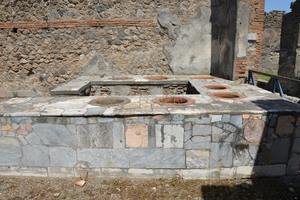 Fast food establishments in Ancient Rome were mostly visited by people from the lower classes (slaves, freedmen, sailors, porters, artisans, day laborers). Juvenal also claimed that such places were often occupied by bandits, thieves, runaway slaves, executioners and undertakers who were unable to prepare anything in their cramped quarters, as well as workers and travelers. If aristocrats visited such establishments, they risked losing respect in society, which was actively used by political competitors. Thermopolies, cowpones and popins served not only for eating, but also for leisure and socializing. Often they were used for gambling, dancers and singers performed in them. Many Romans had their own" favorite " places where they were regular customers. The owners often advertised their establishments with barkers, as well as bright murals at the entrance. 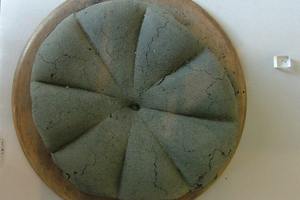 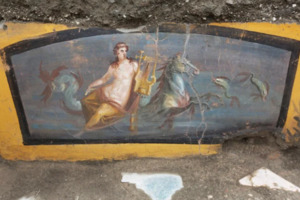 Fresco at the entrance to the thermopolium. Pompeii. 1st century AD 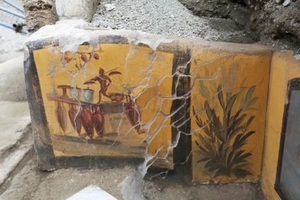 Fresco at the entrance to the thermopolium. Pompeii. 1st century AD

Bars and eateries received visitors filled up rather in the evening and were open until night, many were open during the day, especially those located near the thermal baths or other places with a large flow of people.

Wine was served in taverns, but beer, olives, and other snacks were also served in Gaul. Popins served peas, beans, onions, cucumbers, eggs, cheese, fruit depending on the season, several meat dishes for more affluent customers, pies and pastries. Some emperors tried to limit the range of dishes served, thereby trying to reason with "luxury" and observe ancient customs, motivating citizens to cook hot food only at home, in addition, thermopolies could serve as a gathering place for dissatisfied people. For example, Tiberius forbade the sale of bread and pastries, under Nero it was forbidden to sell "cooked food, except vegetables and herbs", under Vespasian it was allowed to sell only beans.

In Pompeii, many thermopolia and popin — eateries with counters facing the street-were unearthed. In the rooms there were deep vessels in which there were cauldrons with food. Behind the counter were shelves of wine amphorae, as well as crockery and cooking utensils. In such establishments, there was a stove or hearth, over which hung a vat of warm water, with which visitors could dilute wine or just drink clean water. Meat was being roasted over the hearth for the wealthiest citizens. Large thermopolies also had separate rooms for storing supplies, as well as a guest room, which could be quite richly decorated with frescoes and furniture. WIP clients were often served in such rooms. 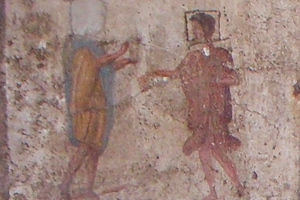 Fragment of a fresco in thermopolia. Pompeii. 1st century AD 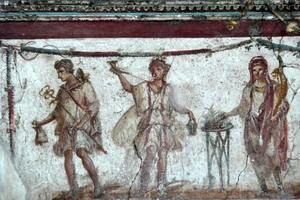 Fresco from the thermopolium of Vetucius Placidus in Pompeii. 1st century AD 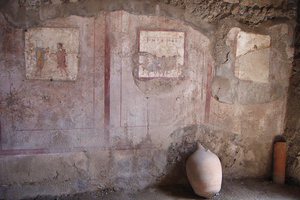 Suetonius. Life of the Twelve Caesars