The Pyrrhic War is a series of military conflicts involving the Greek states (Epirus, Macedonia, Magna Graecia city-states in Southern Italy), the Romans, the Italian peoples (Samnites and Etruscans) and Carthage as part of various political alliances.

Pyrrhus (319-272 BC) - King of Epirus (307-302 and 296-272 BC) and Macedonia (288-285 and 273-272 BC), a relative of Alexander the Great (Pyrrhus was his first cousin). Pyrrhus dreamed of the glory of his famous ancestor and therefore, among other things, led an active policy of conquest. He became famous as an experienced commander and one of the strongest opponents of Rome. It was he who first used war elephants against the Romans. According to Titus Livy and Plutarch, Hannibal considered Pyrrhus to be one of the greatest generals since Alexander the Great. Also, according to Plutarch, Pyrrhus is the author of the popular expression "Pyrrhic victory".

A Pyrrhic victory is a victory that came at too high a price, the result of which did not justify the effort and money invested.

The Kingdom of Epirus is an ancient Greek kingdom located on the Balkan Peninsula in the geographical region of the same name. Under King Pyrrhus, it reached its peak.

Reasons for the war on the part of Rome: expansion of its power and territories, due to the conquest of Southern Italy and the Greek city-states located there, called "Magna Graecia". On the part of his opponents: stop the expansion of Rome's power. Defend your independence. Personally, Pyrrhus dreamed of becoming as great a general and ruler as his relative Alexander the Great. 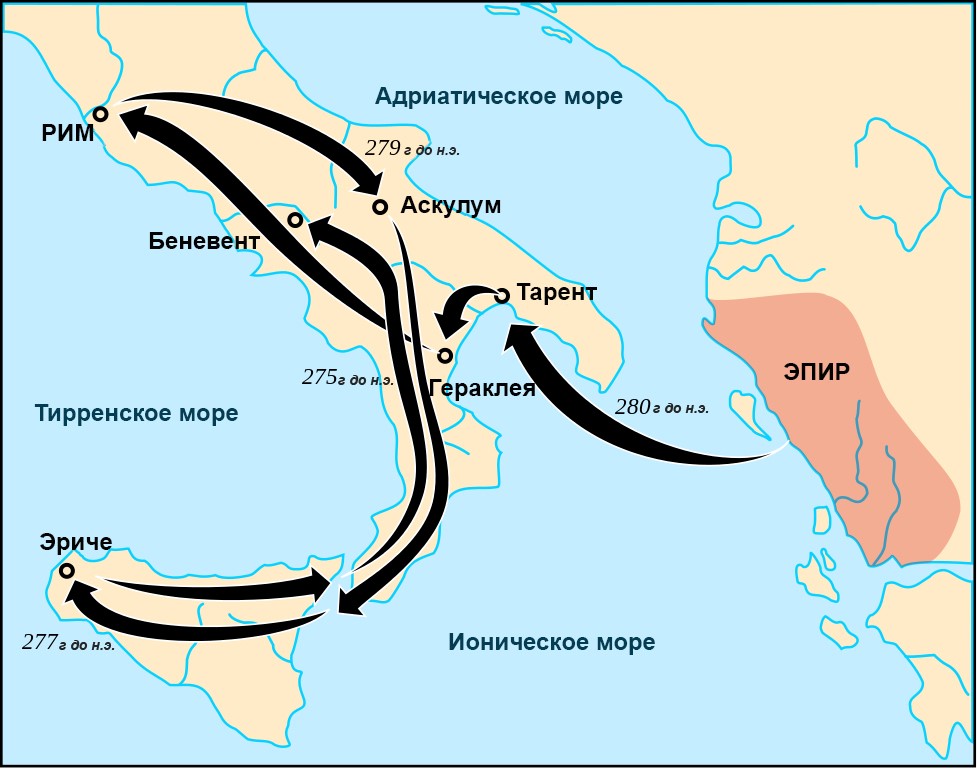 Rome sent troops and sent its fleet into the Gulf of Tarentum. Rome's actions angered Tarentum and it declared war on Rome. In 280 BC, Tarentum, realizing the strength of Rome, having lost several battles to it, called to his aid King Pyrrhus, who ruled in the kingdom of Epirus and was a descendant of the legendary Alexander the Great.

Pyrrhus landed in Italy in the spring of 280 BC. e. His army consisted of 22 thousand infantry, 3 thousand Thessalian cavalry and 20 war elephants, the use of which the Greeks borrowed from the East. The first battle between Pyrrhus and the Romans took place near the city of Heraclea in July 280 BC.The Romans in this battle were commanded by the consul Publius Valerius Levinus. The victory was won by Pyrrhus thanks to his elephants and Thessalian cavalry. As a result of the defeat, the Romans lost Lucania, and the Bruttians, Lucanians, Samnites, and almost all the southern Greek cities, except Capua and Naples, which remained loyal to Rome, went over to the side of Pyrrhus. 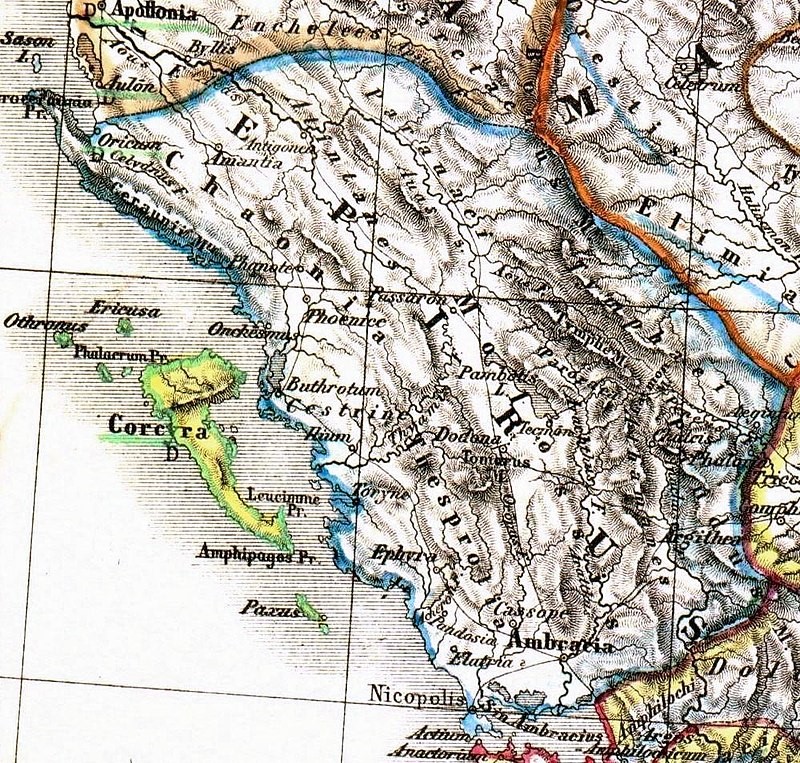 Map of the kingdom of Epirus, ruled by King Pyrrhus

There was an attempt to negotiate peace, but it was not successful and Pyrrhus marched to Apulia, where the second battle between Pyrrhus and the Romans took place in 279 BC – the battle of Auscula(now the city of Ascoli Satriano, Italy). The Romans in this battle were commanded by the Consul Publius Decius Musa. The Romans called the elephants "Lucanian cows", remembering their first encounter with elephants in the region of Lucania.

The battle was again won by Pyrrhus and his allies. It was after this battle, in which Pyrrhus lost many of his soldiers and officers, that he is said to have exclaimed :" One more such victory and I will be without an army!" Hence the expression “Pyrrhic victory”. 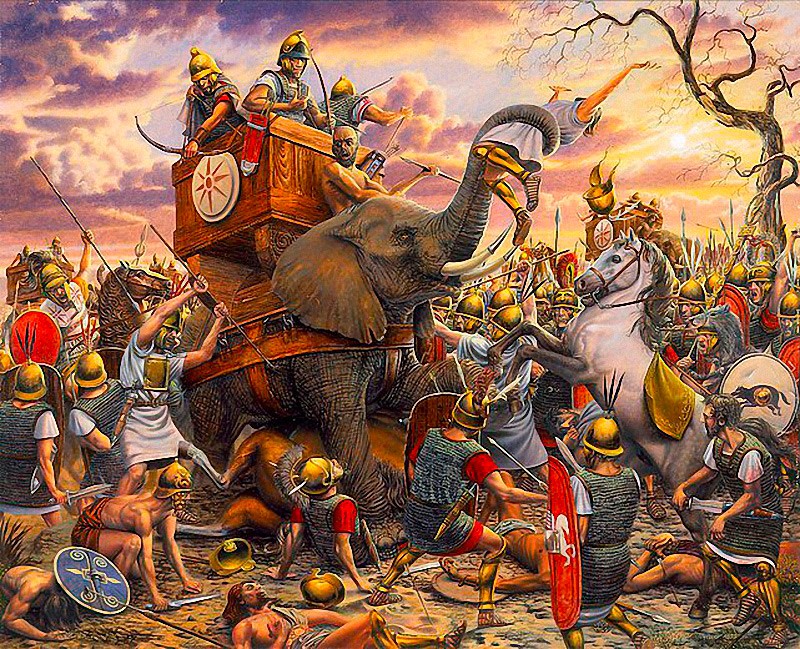 Battle of Pyrrhus ' troops with the Romans

Despite his victories over Rome, Pyrrhus ' position in Italy was difficult. Rome's resources were far from depleted, Latin allies remained loyal to Rome, and discontent was growing in Tarentum and other southern Italian Greek cities. Under these circumstances, an embassy arrived to Pyrrhus from Sicily, from the city of Syracuse, who were oppressed by the Carthaginians and they asked Pyrrhus to come to them and help in their fight against Carthage. The war in Italy dragged on and demanded more and more resources from Pyrrhus. Under these circumstances, he began negotiations for peace with Rome, but the Senate rejected his proposal for peace. Rome received help from Carthage, which thus tried to keep Pyrrhus in Italy and prevent his transfer to Sicily.

Having received help from Carthage, Rome was ready to continue the war with Pyrrhus. But Pyrrhus, seeking glory, left garrisons in Tarentum and Locri, and sailed with the main army to Syracuse in 278 BC. e. In Sicily, Pyrrhus achieved at first success, pushing the Carthaginians, but then, because of his cruel policy, disregarding democracy in the Greek city-states of Sicily, suffered several defeats and retreated to Syracuse.

Taking advantage of the absence of Pyrrhus in Italy, Rome went on the offensive. The Romans, having their own supporters, without a struggle occupied the cities of Croton and Locri, and began to push back the Samnites and Lucanians, who began to desperately ask Pyrrhus to return to Italy and help them in the fight against Rome. Pyrrhus left Sicily, where all was lost, and headed back to Italy. Despite losing some of his troops to an attack by the Carthaginian fleet, Pyrrhus landed in Italy in the spring of 275 BC. The decisive battle between Rome and Pyrrhus took place in 275 BC near the city of Beneventa, in southern Italy. The Romans in this battle were commanded by the consul Manius Curius Dentatus.

The number of troops fighting in this battle is unknown, but it is known that the Romans were able to scare the war elephants of Pyrrhus, who began to destroy their own troops, which led to Pyrrhus losing this battle. Pyrrhus first fled to Tarentum, and from there, realizing that his plans were unsuccessful in Italy, he left it forever. Pyrrhus himself would die three years later in a street fight in Argos. As a result, Rome was able to defeat Pyrrhus, showing that the war of attrition was carried out by him, since the resources of Rome were more powerful than those of Pyrrhus, who relied mainly on the resources of his kingdom (Epirus).

In 272 BC, the Romans captured Tarentum. After about 5 years, Rome was able to break the resistance of the other tribes, who still retained their independence,and eventually subjugated the whole of Southern Italy. 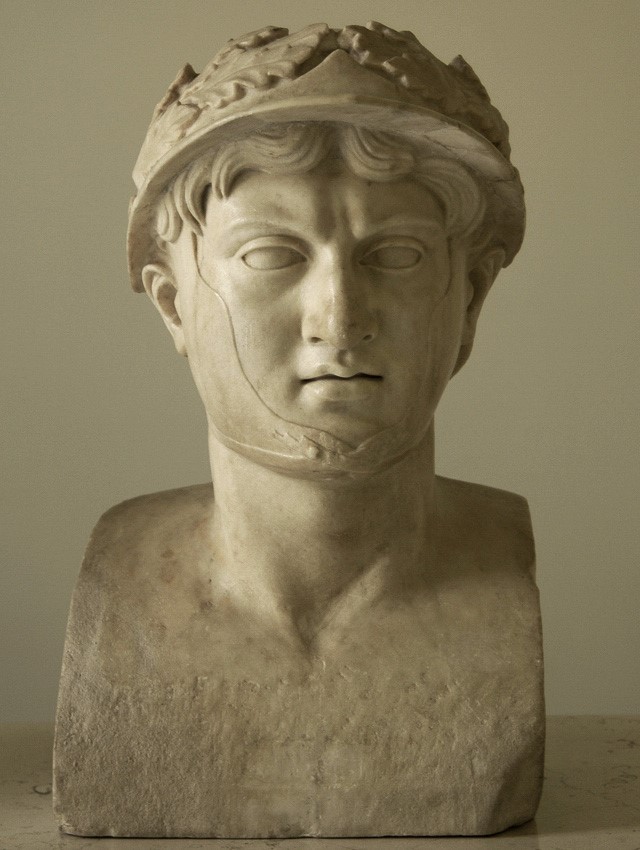 Portrait of Herm of Pyrrhus of Epirus. Marble. From the original approx. 290 BC Naples, National Archaeological Museum.

As a result, Rome brought all of Italy under its rule, from the Strait of Messana (in the south) to the Rubicon River (in the north) on the border with Cisalpine Gaul. Rome became one of the largest states in the Western Mediterranean.

The victory of Rome in this war was one of the reasons that began later than the Punic Wars, as Carthage saw the increased military and commercial power of Rome, which became its rival for territories and trade in the Mediterranean. 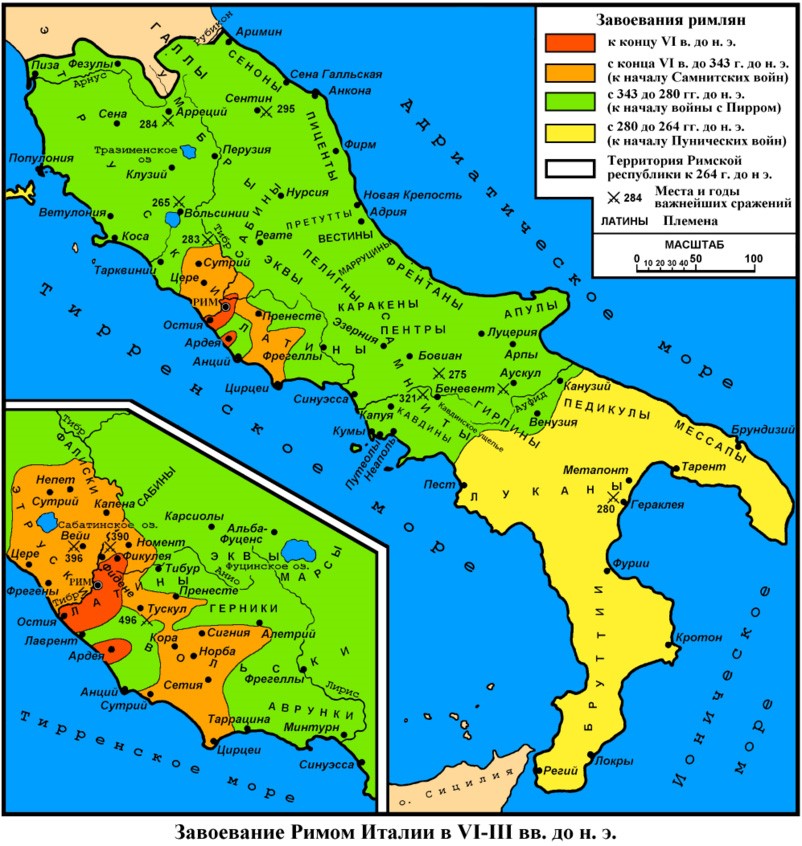 Map of "Rome's Conquest of Italy" in the VI-III centuries BC.