Roman art is the highest achievement and result of ancient art, architecture is one of its aspects. Works of Roman architecture include buildings, ensembles, and structures that organize open spaces (monuments, bridges, embankments, etc.). The layout and development of cities and localities is a special area of construction art - urban planning. It includes both the construction of official structures (palaces, theaters) and utilitarian ones that serve the life of the city (bridges, roads, streets). Roman architecture is an excellent example of the symbiosis of building achievements of Italian tribes and Greek culture. But this symbiosis wasn't blind copying. The Romans were able to borrow all the most innovative things from these cultures and rework them to suit their own realities and mentality.

Initially, the architecture of ancient Rome was formed on the basis of the culture of the Etruscans who inhabited the Apennine Peninsula in the II-I millennium BC. Having conquered the Etruscans in the III century BC, the Romans adopted their achievements in architecture, plastic art and painting. The peculiar technical techniques of the Etruscans were the ground on which Roman engineering was formed. The structural principles that made themselves felt in the architecture of the Early Republic are largely traced back to the Etruscan systems. In temple architecture, the Romans took from the Etruscans a high podium, a steep multi-stage staircase in front of the entrance, and a blind rear side of the building. There is a noticeable repetition of Etruscan forms in Roman tombs. The Etruscan Tumulus dates back to the tomb of Cecilia Metella and the mausoleum of Augustus, and later to the tomb of Hadrian. And Sokolov, Art of the Etruscans, Moscow, 1990.). 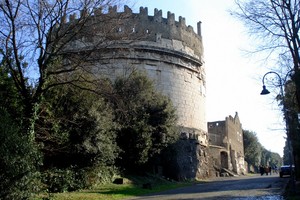 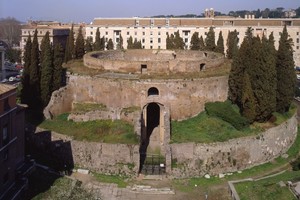 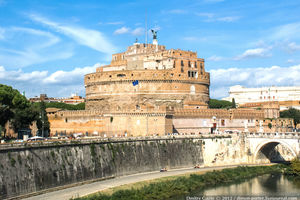 Roman architecture under the influence of the Etruscans brought to perfection the arched system of overlap (vault), the germs of which we find in the Ancient East and in Greece (Kovalev S. I. History of Rome). Especially often the Romans followed the Etruscans in the construction of roads, bridges, and defensive walls.

Etruscan sculpture had as much influence on the Romans as architecture. Even in the early years of the Republic, a Roman monument – the Capitoline She-Wolf-was executed by an Etruscan master, perhaps even Vulca. The influence of the traditions of Etruscan masters on the formation of the Roman portrait, especially in bronze casting, should not be underestimated. The concreteness of the Etruscan artistic thinking, their love of precision and detail, were in tune with the Roman way of perceiving reality. 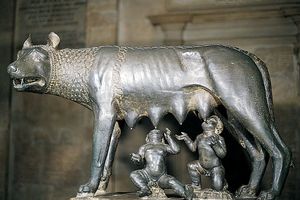 The Etruscans had no taste for mosaic art, but the extensive multicolored paintings of Etruscan tombs aroused the Romans ' interest in wall painting. While among the Greeks of the seventh and fourth centuries BC wall painting was poorly developed due to the general plastic, rather than illusory-pictorial system of artistic worldview, among the Etruscans it was extremely widespread. It was this fact that strongly influenced the development of Roman frescoes and gave birth to a new, not plastic, but illusory pictorial practice of seeing the world, which was destined to become dominant in Europe later (Sokolov G. I. The art of the Etruscans). In this respect, the Etruscans predestined many features not only of Roman art, but of all later European art. 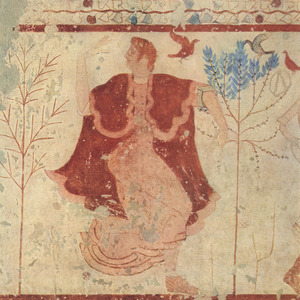 A dancer. Tarquinia, Tomb of Triclinius. V century BC

But it was not the Etruscan cultural influence that played the leading role in the development of Roman architecture. Since the third century BC, Rome has been conducting military operations on the Balkan Peninsula, which end with the capture of Athens by Sulla in 86 BC. After this event, Rome was drawn into the circle of Hellenistic culture, which to a much greater extent than the Etruscan culture influenced the first period of Roman architecture (Brunov N. I. Essays on the history of architecture). Greece was geographically and politically under the rule of Rome, but Rome itself was captured by Greek culture. Greek mythology, poetry, the heroic image of man, the plastic form of expression, and the system of orders fertilized Roman art, and on Roman soil ancient art received a new and final flourishing (Kobylina M. M. Iskusstvo drevnego Rima.). It will be interesting to note that at the initial stage of the conquest of Greece, the Romans ' fascination with their culture was not significant, it was reduced to the export of trophies from the country: Roman legionnaires took everything they could take with them on ships. Many of these works of art will later adorn Roman temples and squares. But in the future, the Roman showed himself to be a receptive and capable student of science. With amazing virtuosity, he mastered technical and formal achievements, mainly the world of Greek forms that caught his eye (Hartmann K. O. History of Architecture.T1.). Over time, the prices of Greek valuables increased, and they became available only to the upper class. Notable Romans bought up Greek statues to decorate their country villas. In Rome, there were Greeks-representatives of the liberal professions, a large number of sculptors and copyists, who always had a lot of orders. The study of Greek architecture by Roman sculptors and architects begins. 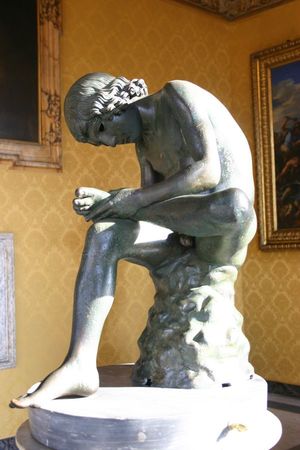 From all of the above, it can be seen that the Romans borrowed a lot from Greek culture, but the mentality of the Romans was different, more calculating than the poetic mentality of the Hellenes. In the Roman buildings of the period under consideration, Italian features are sharply manifested - great rigor and isolation (Blavatsky V. D. Architecture of ancient Rome.). In Rome, from the beginning of the Republican period, those types of art that had a practical purpose predominated. These types of structures include roads, bridges, and water pipes. Monumental, luxurious buildings appeared in Rome later. These include structures that embodied the ideas of the power of the Roman state, and later the emperor, which met the needs of the slave-owning elite and were aimed at gaining popularity among the free population of cities: forums, triumphal arches, amphitheaters, baths, basilicas, palaces and villas, engineering structures that served the cities of the Roman empire and, above all , the giant center of the metropolis, the city of Rome (Universal History of Arts, Vol. 1. Art of the Ancient World/Ed. Chegodaeva A.V.). 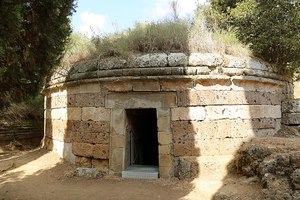