Modern theater buildings willy-nilly take us back to the era of antiquity, where these types of structures originate. It is indisputable that theaters were entirely a Greek invention, their popularity in Rome came from there, but it should be noted that this was not a blind copying on the part of Roman architects.

Roman theaters had several fundamental differences from the Greek theaters that preceded them. According to Vitruvius, Roman and Greek theaters have different rules of construction. According to the ancient author, the plan of the theater itself (Roman) is done as follows: "Having outlined the main center, it is necessary to draw a circle line corresponding in size to the perimeter of the future lower square, and write in this circle four equilateral triangles tangent at regular intervals to its extreme line. The side of one of these triangles that is closest to the stage will define the border of its front side with a line that cuts off a segment of the circle; then draw a line parallel to this line through the center, which will separate the proscenium platform from the orchestra space." "In Greek theaters," wrote Vitruvius, " architects enclose in the main circle not four triangles, but three squares, their corners touching the line of the circle; the side of one of the squares closest to the stage and cutting off a segment of the circle defines this line as the boundary of the proscenium. Parallel to this direction, a line is drawn that is tangent to the extreme part of the circle, and the central points are marked at the ends of the semicircle. Placing the compass on the left point, describe an arc, starting from the left resulting gap to the left part of the proscenium; and in the same way, moving the center to the leftmost point, describe an arc from the right gap to the right part of the proscenium." Such differences are due to the fact that the Romans needed a wider platform and a narrow orchestra. The fact is that in the Roman theater all the actors acted on the stage and the orchestra was intended for seats for senators and magistrates, while in Greece tragic and comic actors performed their roles on the stage, the rest - on the orchestra.

The main difference between the Greek theater and the Roman one is that the Roman theater was an independent building. In the universal history of art, the authors argue that the Roman theater was an independent building, and not cut out of the rock like the Greek one; the second feature was the presence of a stage building, whereas in the Greek theater of the classical era, the real landscape unfolded behind the stage platform. Thus, the interior space of the Roman theater was closed, isolated; The Greek theater is organically connected with nature, the Roman theater is mostly an urban structure (Universal History of Arts, vol. 1. Art of the Ancient World). The fact that the theaters of the Romans were an independent building, we can see from the work of I. Kohli. The researcher writes that Roman theaters were semicircular in shape and had a stage, and were not open from the front directly to the surrounding area (Cole E. A Concise history of architectural styles). The Roman theater used a system of vaulted galleries-substructures. They were used as a foyer, which made it possible to quickly empty and fill the theater with spectators. There were also evacuation corridors located under the spectator seats. Ancient Greek architects, as well as Roman ones, had the same task when building theaters – to convey sounds from the stage to the audience. Vitruvius writes: "For this reason, the ancient architects, following in the footsteps of nature, built the stages of theaters on the basis of the ascending voice and by mathematical canons and music theory tried to make every voice sounding from the stage reach the ears of listeners more clearly and pleasantly." 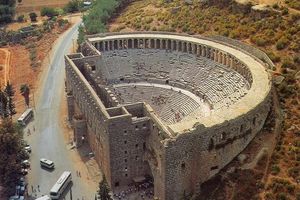 It is important to note that in both Greece and Rome there were wooden theaters. We can find references to one of them in Pliny the Elder, namely the Roman wooden theater of the consul of 115 BC, Marcus Aemilius Scaurus. "In his aedile," wrote Pliny the Elder, " Marcus Scaurus built a structure, the greatest that has ever been built by the hand of man, not only short-lived, but even designed to last forever. It was a theater. His stage was three parts high, with 360 columns - and this in a state that could not tolerate six Hymettian columns without the condemnation of an outstanding citizen. The lower part of the stage was made of marble, the middle part was made of glass (such a luxury was unheard of even after that), the upper part was made of gold-covered boards. The lower pillars were, as we have said, thirty-eight feet high " (Pliny the Elder. Natural science. Ob iskusstvo [About Art] / transl. by G. A. Taroyan). Wooden theaters have not survived to this day. There was a practice of building a stone theater on the site of a destroyed wooden one.

We will now turn to the two Roman theaters. Both of them are made of stone.

The construction of the first stone theater in Rome – the theater of Pompey – dates back to 55-50 BC.e. It should be noted that it was not a separate theater, but a whole theater ensemble, which included a temple, the theater itself, porticos adjacent to the stage – and all this surrounded by a garden. The total area of the complex is 1.5-2 hectares. The audience seats consisted of three concentric tiers. According to P. Giro, both the seats for the audience and all the interior decorations were made of marble. Significant parts of these structures, which are now under modern construction, have been preserved. This theater burned several times under Augustus, Tiberius, Titus, Philip of Arabia, Diocletian – and each time it was renewed, so that even in the VI century performances were given in it. Behind the stage was a vast portico that surrounded a platform planted with sycamores and decorated with fountains, marble and bronze gilded statues (Giro P. Private and public life of the Romans). Several statues and columns made of red Egyptian granite were found near the complex.

The construction of the Theater of Marcellus in Rome was begun by Caesar, and completed in 13 BC. e. already under Octavian Augustus. The building is named after the late nephew of Augustus-Mark Claudius Marcellus - and could accommodate 10-14 thousand people. This structure is made in the Roman-Italian style: the building is completely independent, separate building, and not inscribed in the landscape, such as the Dionysus Theater in Athens. From the very beginning of construction, there was a system of evacuation through substructures. The last part of the evacuation was the lower corridor, which ran around the entire theater and opened outwards with a series of arches. The Theater of Marcellus has come down to our days in a very distorted form. The fact is that the theater building during late antiquity and the early Middle Ages was constantly pulled apart by local residents for stones. Later, according to the Universal History of Architecture, by the 12th century the theater was rebuilt into a fortress, and in the Renaissance the former theater became the property of the Orsini family, which, with the help of the architect Peruzzi, rebuilt it into a palace. Currently, the theater is a two-story building with 16 arched axes, 4 of which have been restored. The lower arcade of the theater is made in the Doric order, the upper one – in the Ionic order. Such a multi-tiered arcade will become the main compositional device of subsequent amphitheatres and theaters (Universal History of Architecture, vol. 2. Architecture of Ancient Rome). This building is a striking example of Roman architecture. 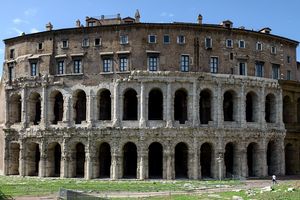