Forum Romanum is the central square in Ancient Rome, including the surrounding buildings. Initially it housed a market, but over time it began to include the comitium, curia, and acquired political functions.

The entire social life of any Roman city was centered in the forum. It was there that the most magnificent architectural monuments were created, and it was there that the main religious and administrative buildings of the city were erected. The word forum means "central square" in Latin. This square was an architecturally designed space that had to be adapted to the most diverse requirements of a city dormitory. It should be arranged in such a way that the whole city rejoices at it and admires it, and that everyone feels at home here and comes here as if home. The forum should be made stately, beautiful, and cozy.New decor items and the main trends in the development of Roman art can be seen there. There was a forum in almost every Roman city; in small, provincial cities, a small central square was enough.

In Rome, the capital of the state, the area of the Roman Forum was also small in size, it was 160 m long and varied in width from 50 to 80 m at various times, although it should be noted that during the Republican Rome it was the largest forum in size. Perhaps this choice of the size of the squares was connected with the desire to preserve some kind of comfort in the city and not turn the central square into just a large market teeming with people of various classes. Consideration of such a type of architectural monument as the forum will be carried out on the example of Rome, as the main city of the state. The most ancient forum was the Forum in Rome(Forum Romanum), the beginning of its construction dates back to the royal period. Here is what the ancient author Vitruvius writes about the construction of this type of structure: the size of the forum should be coordinated with the number of inhabitants, so that it is not too cramped or does not seem empty due to lack of people. Its width is defined as follows: its length should be divided into three parts and two of these parts should be taken as the width. So it turns out to be oblong and conveniently located for entertainment. ( Vitruv.,V.1). A similar device applies to many Roman forums, but the Roman Forum that appeared first is an exception.

It is important to note that such urban cultural centers as Rome and Athens were built up without having a pre-made plan. The ancient city of Rome was forever left without a rational, clear layout. The Roman Forum( Forum Romanum) was no exception, it was the oldest square in the city, until the imperial period it was the center of public life in Rome, but it is a Forum, like the city itself did not have a proper layout. The first forum did not look like the main square of the city in our understanding, this was due to the fact that throughout its history it was often rebuilt, each new era of Roman history left its mark on the architectural appearance of the main urban center of the state. The Roman Republic-era Forum sold all sorts of goods. The streets surrounding it were busy. It was surrounded by shopping malls and shops. In the first centuries, the Republican forum also served as a place for folk performances, and sometimes gladiator battles. During the holidays, treats for the Romans were displayed on stalls right in the square. As mentioned above, before the construction of the Colosseum, gladiator fights were held in the Forum, one of the most famous gladiator fights held here is the fights arranged by Caesar in 65 BC, in which 320 pairs of gladiators took part. Religious processions and mourning processions also took place along the Sacred Road that ran almost through the entire Forum. 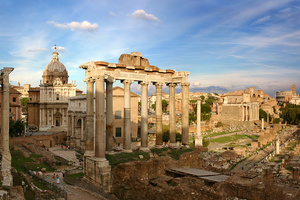 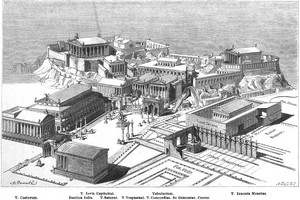 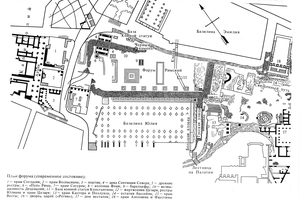 During the Republican period, many new buildings appeared in the Forum: a new type of architectural structure for Rome - basilicas, houses of aristocrats, statues, the Curia Julia, the column of honor and the altar dedicated to Caesar, as well as the archive building – the Tabularium. Now it will be appropriate to refer to some of these monuments. The first type of structure to note is basilicas, whose construction began in the second century BC, which emphasized the role of the center of the Forum's political and administrative life. This type of building was also known in Greece, where government and judicial offices were located in basilicas. In Rome, the functions of the basilicas changed, and the building was used mainly for commercial purposes, business and political gatherings. About the architecture of this type of buildings says in his book Vitruvius: the Basilica should be put on the ground – he writes - adjacent to the forum in the warmest parts of that in the winter there could gather merchants without suffering from the weather; the Basilica should be the width of at least one-third and more than half of its length, except where precluded by the terms of places.( Vitruv.,V.5.).

Roman basilicas have a rectangular plan with three naves: one central, and two side. The side naves were two-storeyed, surrounded by a double or simple colonnade of galleries. Vitruvius writes that the columns should be made the same height as the width of the porticos; the portico should be a third of the width of the internal space of the basilica. The upper columns are made smaller than the lower ones. The wall of the gallery between the upper and lower columns should be made a fourth part below the upper columns, so that merchants could not see those walking on the upper tier. Architraves, friezes and cornices should be made according to their proportionality with the columns. ( Vitruv.,V.6). The basilicas of ancient Rome were built according to a similar plan, and later architects adopted this construction plan for the construction of Christian churches. Several basilicas were built in the Roman Forum during the Republican era: Sempronia, Portia, Opimia, Aemilia, and Basilica Julia. Here it is appropriate to give a brief description of one of these basilicas, for example, the Basilica of Aemilia, built in 179 BC by censors Marcus Aemilius Lepidus and Marcus Fulvius Nobilior. This basilica served as a place for concluding business transactions that could not be carried out in the square. This basilica, like many others, was originally most likely built according to the plan indicated above, only after several reconstructions, in the era of Augustus, and then Tiberius, the building was divided into four naves by a row of columns. Despite such transformations, the fate of this building was sad, today almost nothing remains of it, since even in ancient times, or rather in 410 AD, the basilica was burned by the Visigoths of Alaric and was no longer restored.

One of the most original buildings of the time of the Roman Republic can be considered the state archive – Tabularium. The building that enclosed the Roman Forum from the West was located at the foot of the Capitol, dating from 78 BC. e. The Tabularium is a two-story archive building, the front part of which is of particular value, since in it we have a connection of arches on pillars with semi-columns attached to these pillars, bearing an entablature attached to the wall above the arches. In this construction, the main emphasis is shifted to the mass of arches and pillars, separated from the arches by a cornice of several simple fragments. A warrant is attached to this mass to dismember it. In the Tabularium, for the first time in a very significant Roman monumental building, we have a typical cell consisting of two pillars with an arch thrown between them and semi-columns attached to the pillars, which carry a straight entablature above the arch. If we talk about the lower part of the building, it did not have such a decoration as the upper one, but was a wall laid out of tuff masonry in 25 rows. On this wall were windows and a door that led to the stairs leading further to the Capitol. As for the material used in this construction, it is concrete, but this material was used for the inner part of the wall, and from the outside the walls of the archive are made of travertine and tuff, for the smoothness of the surface of the wall was covered with a thin layer of tuff. The tabularium was rebuilt in subsequent epochs, and from ancient times only the wall of the first floor and several cells decorating the second floor have been preserved. Many transformations in the Roman Forum took place during the time of Julius Caesar and Octavian Augustus, that is, at the turn of the millennium. Under Julius Caesar, the Basilica of Julia was built, the construction of a new curia, the so-called Curia Julia, began, the temple of Felicitas was erected, which later burned down under the Emperor Claudius, and the Rostrum (orator's tribune in the forum, decorated with the prows of captured ships) was moved from one part of the Forum to another. Octavian Augustus, in turn, built a temple in honor of his predecessor, which was called the Temple of the Divine Julius. According to Stacciolli.R. A. in his book "Ancient Rome", he writes that these transformations coincided with the beginning of a period of strong, sometimes violent and dramatic role of the beating heart of the city. Indeed, with the formation of the empire, the center of public life gradually began to shift to a complex of imperial forums located nearby, larger and more practical. But this is not the only opinion about the duration of the functionality of the Roman Forum. The historian V. I. Pilyavsky in his work" Rome " states that the Romanum Forum retained its traditionally important role as a social and political center in the life of the city and the entire Empire. We are more inclined to agree with the second opinion, since Rome at the end of the Republic and the beginning of the Empire was a megalopolis of ancient proportions, and therefore its commercial and political life was saturated, and we are inclined to believe that over time the size of the Roman Forum became insufficient for an ever-growing state, which led to the construction of new forums It is interesting to note that despite the large number of new imperial forums appearing, many rulers: Titus, Vespasian, Domitian, Constantine and others continued to erect honorary monuments and temples here, to the glory of their fatherland, their victories and their loved ones. No less interesting is the fact that even after the fall of Rome in the 5th century AD, monuments continued to be built here in the Roman Forum, and it was the Column of honor to the Byzantine Emperor Phocas in 608 AD that was the last building on this ancient square. 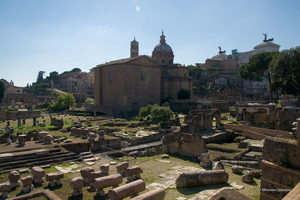