Umbon (Latin: umbo "protrusion, bulge") — a metal plate of a hemispherical or conical shape, placed in the middle a shield that protects the warrior's hand from blows. On the inside of the shield, under the umbon, there was often a handle by which the warrior held the shield. Sometimes the umbon had a pointed shape that allowed striking blows with a shield. It also served a decorative function: Celtic shields decorated with several umbons were found.

Umbon shields were widely used from the Bronze Age to the late Middle Ages, as a more expensive and reliable version of a simple wooden shield. The way the shield was held by the handle in the middle significantly affected the tactics of combat: in single fencing, it was possible not only to actively repel the blows of weapons, but also to attack, and when building a pedestrian formation in a row, it became possible to form a dense solid wall of shields.

Umbons were made of iron, bronze and wood. 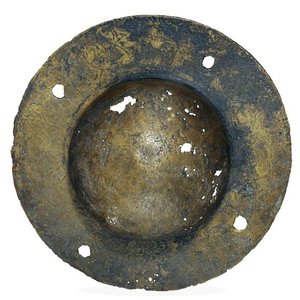 Round bronze umbon. Found in Kirkham, England. Kept in the British Museum 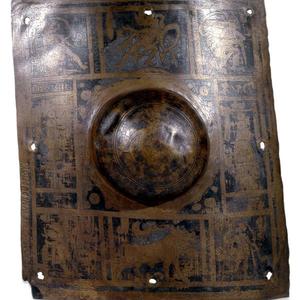 Decorated umbon Legio VIII Augusta. First half of the second century AD Found in Britain on the River Tyne. The British Museum