Like many other ancient warriors, the Celts used shields as the main element of defense. It was used by both spearmen and swordsmen. Celtic shields were of various types, both in shape and size, and in the way they were made.

They were made from a set of wooden planks or from bronze. They had a metal umbon of various shapes (and sometimes several). The grip was typical for the ancient time-fist. And for reliability, the shields were edged with metal at the edges. 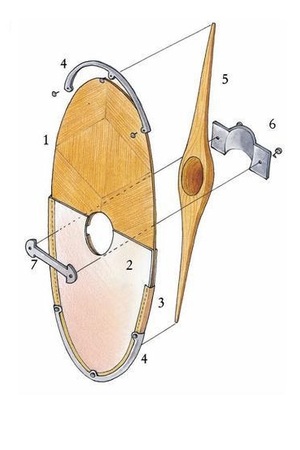 Diagram of the structure of the Celtic shield 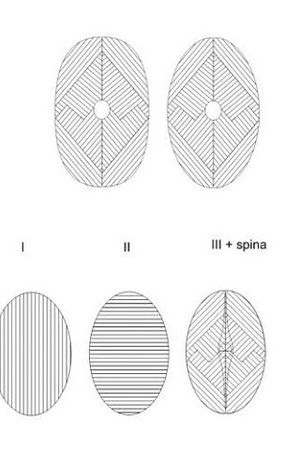 Scheme of laying boards in boards

There are a huge number of finds on Celtic shields - both archaeological finds of the shields themselves, and pictorial sources on bas-reliefs, vases, and figurines. Interestingly, they are authored not only by the Celts themselves, but also by their opponents.

Three Laten copies, which, unfortunately, have now fallen to pieces, were made of oak. Their thickness in the center was about 1.2 cm and slightly thinned to the edges. Two of them have an Italian-style vertical rib. On the third page, it was not saved. The umbon is convex — so that the hand can hold the handle freely. The latter was made from a separate piece of wood, usually reinforced with an iron strip, and nailed to the shield from the inside. A rectangular iron plate was nailed across the bulge to provide additional protection for the hand.

Shields of this type were also found in Denmark and Ireland. They were covered with hide, and we have no reason to doubt that the Lathen shields were also covered with hide, or perhaps felt — the bare wood would have cracked from the chopping blows. Similar, unadorned wooden shields are found in ship burials in Norway. This makes you wonder if they were made specifically for funerals and other ceremonies, as they did in archaic Greece and Italy. In any case, obviously, an uncoated wooden shield would be useless in battle. Those Celtic shields depicted in the victory frieze from Pergamum appear to have a skin-tight design. It could be on both sides and doubled on the edge in order to strengthen it. The specimen from Clonure Townland, Tipperary, Ireland, has a shield edge made entirely of leather and stitched through the shield. They also found a metal edge. A Latene-type shield with a hide coating could weigh about 6-7 kg (wood about 4 kg, hide about 2 kg, and metal umbon about 250 g). The ancients undoubtedly knew that oak can be strengthened by firing, and, of course, subjected shields to heat treatment. 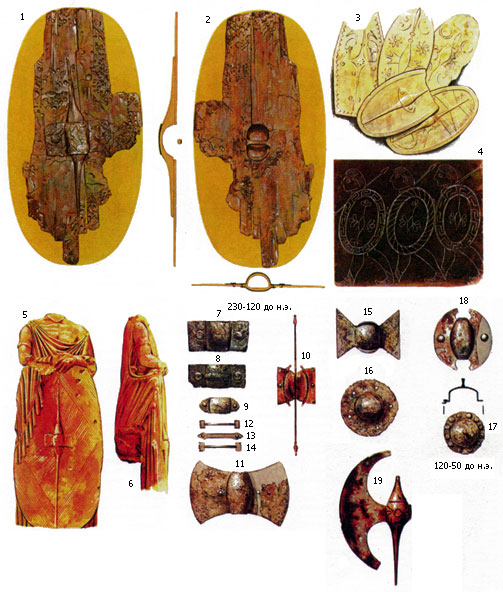 1, 2 — one of the wooden shields recovered from the lake at La Teng. Neuchatel Museum, Switzerland. 1 — the outer part of the oak shield, which shows a vertical rib and an umbon in the form of an iron strip. 3rd century BC

The origin of this type of shield remains obscure. The similarity between the Roman scutum and the Celtic shield is so great that they must have had common roots. The first Celtic shield appears in a drawing from the scabbard of the Hallstatt period, around 400 BC, while the scutum becomes known 300 years earlier. The only possible conclusion in this case is that the Celts adopted the Italian form of the shield when they invaded Italy in the fifth century BC. e. Then they began to use it on the other side of the Alps. In addition, the Hallstatt scabbard may have come from the Celts of northern Italy. It is impossible to agree with the statement that the Celts were not familiar with the shield at all before coming to Italy, since Celtic tactics require its presence.

From the series of umbons shown above, you can trace their evolution from simple stripes of the third century BC to the carefully designed umbons - "butterflies" of the first century AD, found in Britain. Although all but one of them were found in continental Europe, there are almost always corresponding British specimens.

Most of the Celtic shields were oval in shape, although images and archaeological finds show rectangular, hexagonal or round specimens. The same images indicate that the shields were decorated with various symbols, animal drawings or geometric ornaments. Diodorus claims that these ornaments were bronze, but most likely they were simply painted with paint. It is possible that the historian was referring to elaborate bronze shields of the type found in Britain, but they were clearly used only for ceremonies, not for battle. 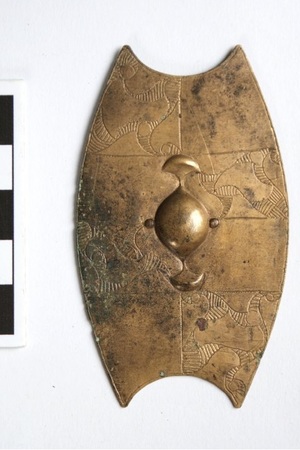 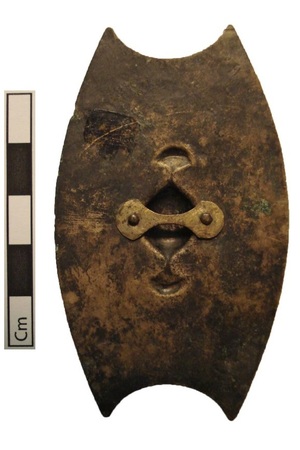 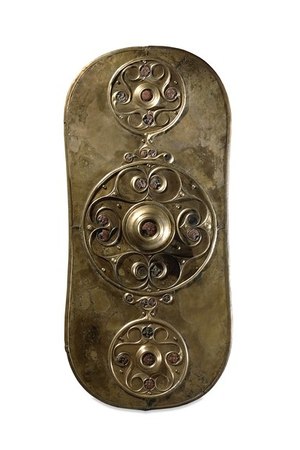 Votive bronze shield. Found in the Thames near Battersea Bridge, London. The British Museum. 350-50 BC 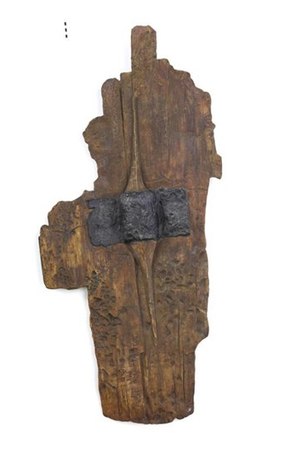 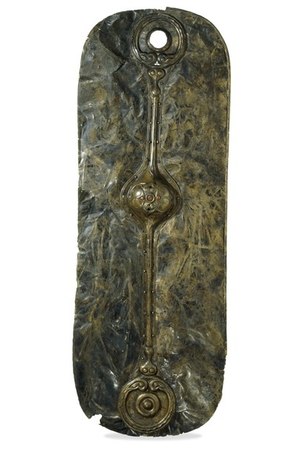 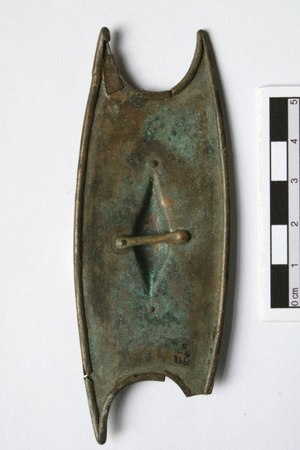 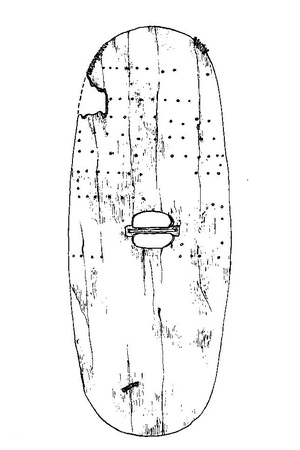 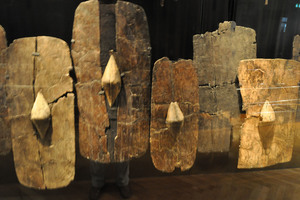