Vestals (Latin: virgo vestalis — - priestesses of the goddess Vesta in ancient Rome. Vestals had a unique social status for women, were higher in the hierarchy than most men, and enjoyed great respect and honor: a person who insulted a Vestal in any way could be sentenced to death. Girls were freed from their father's authority, and had the right to own property and dispose of it as they saw fit. Until the end of the service, they were required to remain virgins, and those who violated the taboo were executed.

Vestals were inviolable, and many gave them their wills and valuables for safekeeping. When entering the street, the Vestal was always accompanied by a lictor who went ahead, and Vestals also had the right to go out in chariots. If they encountered a criminal being led to execution, the priestess had the right to pardon him. This fact indicates that the Vestals may have had administrative and state power.

The main duties of Vestal virgins are to maintain the sacred fire in the temple of Vesta, maintain the purity of the temple, perform sacrifices to Vesta and the penates, protect the palladium and other shrines. It is assumed that they performed certain rites, keeping the sacrament from the uninitiated. Vestal vestments consisted of a long white tunic, and the head was covered with a special bandage (Lat. infula). 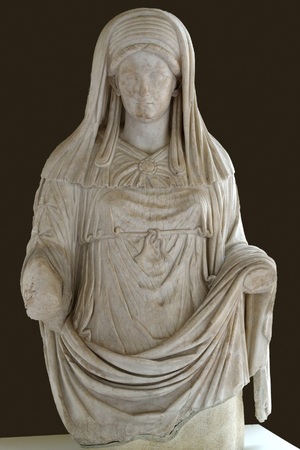 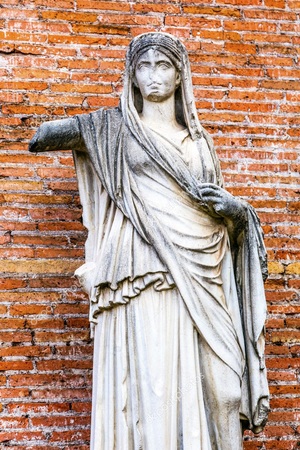 Statue of the Vestal Virgin from the temple of Antoninus and Faustina. Rome, 2nd century AD 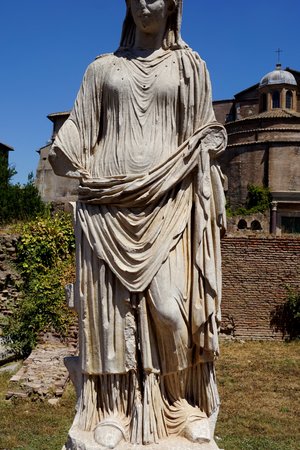 The creation of the institute of Vestal virgins is attributed to King Numa Pompilius, who finally ordered the entire system of state religion, which it remained until polytheism ceased to be the religion of Ancient Rome.

Livy described the ministry of Vesta established by Numa as follows: "He also chose virgins to serve Vesta; this ministry comes from Alba and is not alien to the family of the founder of Rome. In order that they should be in charge of the temple affairs without separation, Numa appointed them a salary from the treasury, and distinguished them by virginity and other signs of holiness, gave them universal respect and inviolability."

Plutarch, who also describes the cult of Vesta in Comparative Biographies, did not answer the important question of why young girls were chosen as Vestals and why they had to keep their purity for 30 years. This feature probably comes from more ancient Latin traditions. Plutarch rightly points out the similarity between the Roman and Greek rites of maintaining an unquenchable fire, but in Greece, old maids had to maintain the fire, and if it did go out — it was possible to make a new one only in the ancient way-by lighting it from the sun. Plutarch tried to logically correlate the need for priestesses to preserve their virginity with the " barrenness of fire." This belief is explained in the primitive "dedication to the deity" - characteristic, for example, for the priests of the goddess Cybele or for the Inca "solar maidens".

Initially, two Vestal virgins were chosen – Gegania and Verenia, then two more were added to them – Canulea and Tarpeia. Later Servius Tullius brought the number of Vestal virgins to six, and this number remained unchanged until the end. 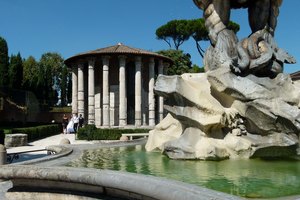 Temple of Vesta in Rome

When a vacancy in the college of priestesses became vacant, a new Vestal was chosen from among the twenty female candidates. Initially, this was done by Roman kings, and in the era of the Republic and Empire - Supreme Pontiff by drawing lots.

Vestal candidates were selected according to the following criteria::

The new Vestal was brought to the atrium of the Temple of Vesta, where her hair was cut off and hung as a donation on a sacred tree. Then the young priestess was dressed all in white, given the name "Beloved" (Latin: Amata), which was added to her nomen, and told about her new duties. The chosen Vestals, according to Roman law, left their families and came under the patronage of the Supreme Pontiff. A girl could be released from the duty of serving Vesta only for special family circumstances.

The service life of the goddess Vesta was 30 years. The service was divided into 3 equal parts: training, direct service and mentoring. At the end of these years, the Vestal became free and could marry. However, this was extremely rare, as there was a belief that marriage with a Vestal would not lead to good. The main reason was that by marrying, the former Vestal lost her unique status for a Roman woman and became an ordinary matron, completely dependent on her husband, which, of course, was not profitable for her.

At the head of the Vestals was the most senior of them, called the Great Vestal (Latin Vestalis Maxima), who received instructions directly from the supreme pontiff.

The main duty of the Vestal virgins was to maintain the sacred fire on the altar of the goddess Vesta. The flame was extinguished once a year — on the first day of the New Year. After that, it was re-ignited in the most ancient way — by rubbing wood against wood. The accidental extinction of the sacred fire was considered a bad omen; if a Vestal virgin's fire was extinguished, she was scourged by the Great Pontiff himself.

The Vestal Virgins were very rich, mainly because of their extensive estates, which gave them a large income, and each of them personally received a considerable sum from her family at initiation. In addition, the Vestals received generous gifts from the emperors: for example, in the year 24, when Cornelia joined the Vestals, Tiberius gave her 2 million sesterces.

There were also disadvantages to this social status. In case of violation of the vow of chastity, the Vestal was sentenced to death. Of course, Rome could not commit such a terrible act as the murder of a Vestal virgin, so they were punished by burying them alive in a Villainous field (Lat. Campus Sceleratus), located within the city limits at the Colline Gate on the Quirinal. The Vestal virgin was given a small supply of food, and technically such a burial was not a death penalty. The seducer was flogged to death. The Vestal virgin who had broken her vow was placed in a stretcher tightly closed and strapped so that even her voice could not be heard, and carried through the forum. Everyone made way for her in silence and followed her without saying a word, in deep grief. For the city, there was no more terrible sight, no sadder day than this. When the stretcher was brought to the designated place, the slaves untied the straps. The high priest recited a prayer, raised his hands to heaven before execution, ordered the criminal to be brought with a thick veil over her face, placed her on the stairs leading to the dungeon, and then left with the other priests. When the Vestal descended, the ladder was raised, the hole was covered with a pile of earth, and the place of execution became as flat as the rest of the surface.

Priestesses of the goddess Vesta played a significant role in the fate of Rome. Data on the first Vestal virgins known to us are semi-mythical in nature: Rhea Silvia-mother of Romulus and Remus, the founders of Rome;

According to legend, two Vestal virgins, Tuccia (Lat. Tuccia and Claudia were accused of violating their vows of chastity, but both were able to prove their innocence by performing miracles. Claudia pulled on the cable and moved the ship, which was buried deep in the mud, while Tuccia was able to collect the water in a sieve and carry it from the Tiber to the Forum. 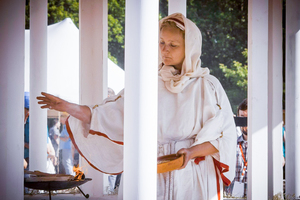 A woman in Ancient Rome, The Pontiff

The Vestals // Encyclopedia of Brockhaus and Efron : in 86 volumes (82 volumes and 4 supplements).