Pontifex (Latin: pontifex, literally-bridge builder, from pontis-bridge (genitive) and facio – to do) - a member of the highest college of priests in Ancient Rome, which managed religious affairs in the state. Sometimes translated in Russian as pontifex.

The insignia of the pontiffs were objects for performing rites: a special plate for offerings, a sacrificial vessel, a knife and a special toga covering the head. The College was not associated with the cult of a particular god, but was responsible for religious processes in the state as a whole. The pontiffs controlled the observance of the sacredness of religious rites and norms of behavior (both by priests and ordinary residents of the empire). Their duties also included keeping a calendar and judging religious matters. In the field of family law, the college was responsible for the preservation of Roman ancestral and family sacred acts. They also participated in the conclusion of archaic marriages (confarreatio), supervised adoptions, and read out wills.

Initially, one of the main duties of the pontiffs was to preserve the sacred bridge (pons sublicius) over the Tiber River. The creation of the College of pontiffs is usually attributed to Numa Pompilius, who became the first supreme pontiff. Initially, the board consisted of 5 members (including pontifex maximus). Under Lucius Sulla, their number was increased to 15, and under Gaius Julius Caesar - to 16. During the time of the empire, the number of pontiffs was not regulated, and the supreme pontiff was the emperor, who could change their number at his discretion. The organizational structure of the College of pontiffs also included the king of sacred rites (rex sacrorum), the Flamines (3 senior - flamines maiores, 12 junior - flamines minores) and Vestals.

The importance of the pontiffs in the field of jurisprudence and religious law was especially great in the early days of the republic, when the Plebeians were not yet equal in rights with the patricians. After the admission of the Plebeians to the pontificate in 300 BC, the college's influence began to gradually decline. The first great Plebeian pontiff was Tiberius Coruncanius in 254 BC.

Another event that undermined the authority of the pontificate occurred in 131 BC, when the consul Licinius Crassus went with an army to Near Asia, despite the fact that he had no right to leave Italy, being a great pontiff. After this incident, the law forbidding the grand pontiff to leave the Italian Peninsula was not violated until the 1st century BC, until Gaius Julius Caesar , as Grand pontiff, did not go to fight in Gaul. With the further destruction of the foundations of republican values, the authority of the pontificate also fell. Augustus once again reinforced the importance of the college, making the title of Grand Pontiff exclusively imperial. For the performance of administrative duties since 155 AD, the position of promagister was established, which was appointed for one year. 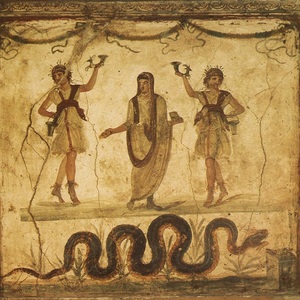 Genius loci and Lara. Often the central priest is interpreted as a pontiff. Fresco in the lararium of the House of Vettii in Pompeii, House of Vettii. A.D. 60-79 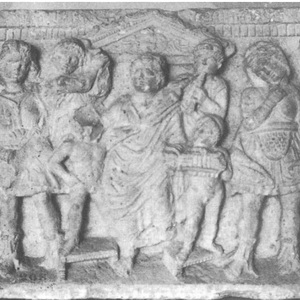 Bas-relief with a priest. Perugia (Perugia). Early 1st century BC

The Supreme Pontiff (Latin: Pontifex Maximus, literally "The Great Bridge Builder") is the high priest, head of the College of pontiffs. Originally, the highest priestly position in Ancient Rome was for life. In 753-712 BC, the position was held by kings.

The Grand Pontiff was the head of the College of pontiffs and presided over the so-called priestly king (rex sacrorum), the Flamines and Vestals. If any of the priests or pontiffs themselves violated their duties, the Grand Pontiff imposed a fine (multa) on them. Despite the fact that the people had the right to criticize the pontiff's decisions, in cases known to historians, they supported him. The Grand Pontiff also kept annual official records of omens (annales maximi). One of the distinguishing marks of the Great Pontiff was a special iron sacrificial knife (secespita). For election resultsThe Grand Pontiff in the Comitia Tributum was called by casting lots for 17 of the 35 tribes, and they voted individually. This order was abolished by Sulla, but was restored by Labienus in 63 BC. After Augustus, the position was given to the emperors. 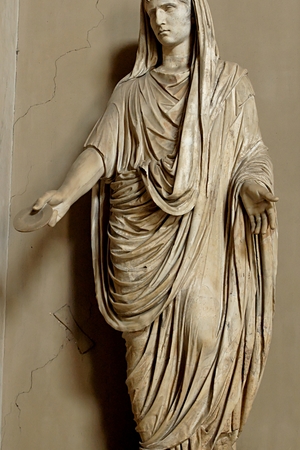 Statue of Augustus in the image of the great Pontiff. Rome, Pio-Clementino Museum. 1st century AD 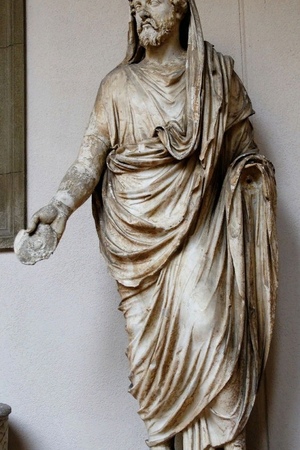 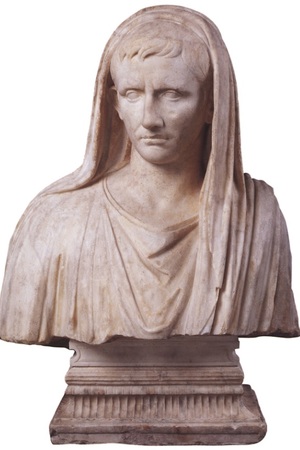 To reconstruct the pontiff, you must first have a wool tunic with red stripes and a white toga with a red border around the perimeter. There are no strict restrictions on the choice of shoes, pontiffs could wear sandals and calzees. The reenactor also needs to make copies of priestly insignia. 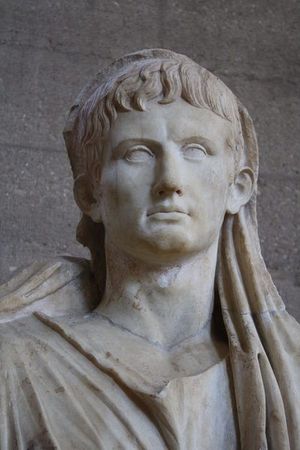 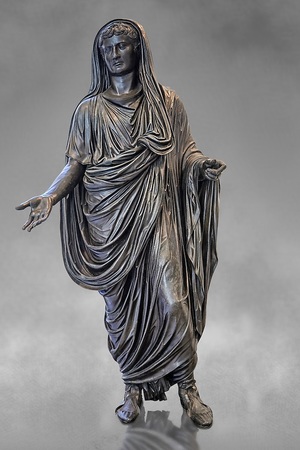 Bronze statuette of Augustus in the image of the great Pontiff. Late 1st century BC 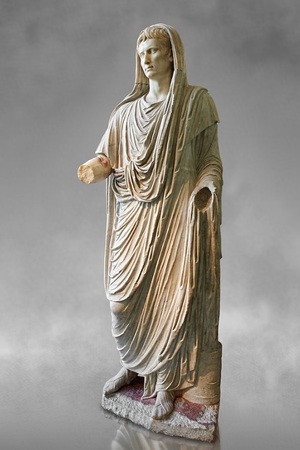 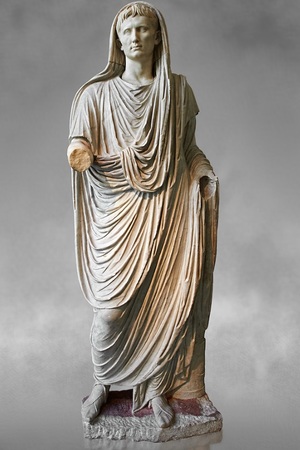 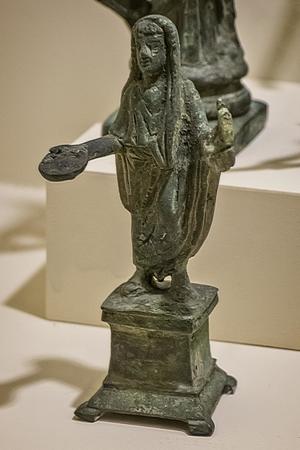 Bronze statuette of the genius of the family. Italy (Boscoreale). 1st century AD 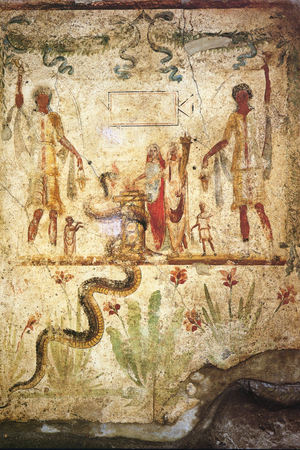 Roman fresco from the lararium of the house of Polybius. Pompeii. 1st century AD 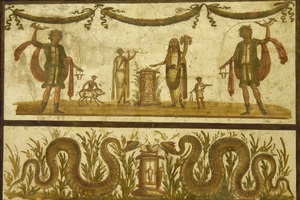 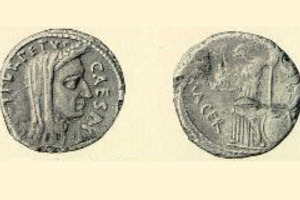 Coin with Gaius Julius Caesar in the image of the great Pontiff. 1st century BC 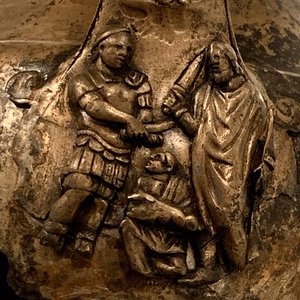 Scene on a second-century Roman bronze jug with a soldier and priest preparing to sacrifice a pig. Part of the superb Roman gallery at Tullie House Museum and Art Gallery in Carlisle.