Sandals (Greek: σανδάλιον, Lat. sandalium) - a type of the simplest open shoes, with a sole without heels, fixed to the foot with leather straps or ropes.

The idea of wearing sandals is far from new. Shoes similar to sandals are found in many peoples. It is believed that sandals originated in Rome due to the influence of Greece or the Etruscans, but it is most likely that sandals originated in Rome without influence from outside. It should also be noted that this type of shoe was also known among other peoples of the Mediterranean, which independently appeared outside the Italian peninsula - in particular in the Ancient Greece and Egypt.

A popular type of sandal in the ancient Mediterranean is similar to what is commonly sold today: a sole that has a fastening separating the thumb and the rest of the toes, as well as straps crossing the foot from above and fixing the side of the sole. The sole was usually leather, sometimes wooden. In the case of a leather sole, it was often layered, and the layers were held together by small leather straps or nails. The sandals could have various decorations on the straps or soles.

Morrow painted a variety of different types of sandals, many of which also appear on Roman statues and mosaics in all periods of Roman art. 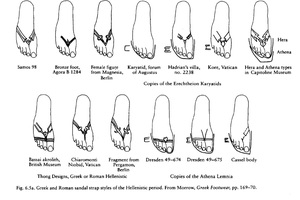 Every civilization around the Mediterranean basin created sandals from the materials that were at hand. There are Etruscan sandals dating from the 7th century BC that have a two-piece wooden sole covered with leather and metal edging found in a tomb in Bisenzio, now in the museum of Villa Giulia in Rome. Leather straps (no longer extant) connected the two pieces, and a bronze frame held the contoured sole together. 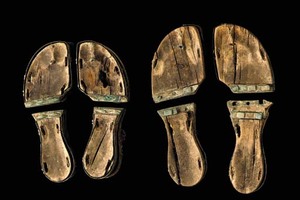 These thick-soled sandals were popular throughout Etruscan times, as fragments of them were found in early tombs, and they are featured on later monuments. The Etruscan style was even copied in Athens, the "world fashion capital" of those times.

Roman frescoes, mosaics, and sculptures depict many varieties of sandals common in Italy throughout the Republic and Empire periods.

For example, in the initiation room at the Villa of the Mysteries in Pompeii, a fresco shows women wearing simple soft sandals with a covered heel and thin soles, similar to those worn by street musicians in the mosaic from the house of Cicero. Another example is the elegant Apollo sandals in the Central Hall b of the Naples Museum. 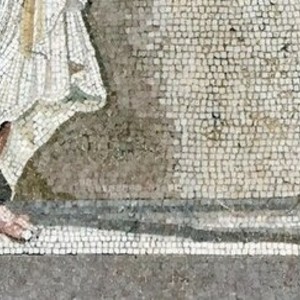 Mosaic from the House of Cicero, Naples 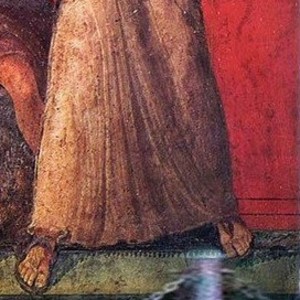 Fresco from the Villa of the Mysteries, Pompeii 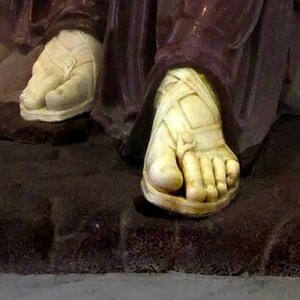 In ancient Rome, the style of sandals was often borrowed from the Greeks, but not universally. Roman sandals were characterized by the following appearance: wide straps crossed on the wearer's foot and were fixed on the sole on the sides. This style of sandals has Greek roots, but it is adapted to the Roman fashion.

Morrow claims that, according to literary sources, Roman sandals are similar to Greek troachids. The appearance of sandals in Rome was diverse. There were so-called "Gali" sandals. They were the simplest wooden sandals. They were probably worn by agricultural workers or construction workers. They were priced at about eighty denarii for a double-soled pair and fifty denarii for a single-soled pair. Morrow points out in his glossary that the name troachida (a diminutive, trochadia) is derived from the Greek verb trecbo, "to run", suggesting the use of sandals by runners.

Another type of sandal was the taurine, which was usually made of bull hide. They were worn by women, and they were valued at fifty denarii a pair with double soles and on one sole at thirty denarii per pair. Taurines could be gilded, so they were estimated to be worth seventy-five denarii and lanatai.

In the Netherlands, Germany (Saalburg, Bonner Berg, Mainz and Cologne) and England (along the Thames Embankment in London and on Vindoland, the Roman fort on Stangate Road south of the Roman Wall), hundreds of sandal soles have been found, as well as some whole sandals, with the remains of soles, three to seven layers thick of leather. On many soles there are different patterns of nails. 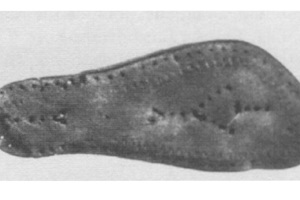 The sole of the sandals with the "follow me" pattern may have belonged to Putana, Romano-Germanic Central Museum, Mainz.

Carol van Driel-Murray in her classification of changing the appearance of sandals from the first to the third centuries AD. In the first century, the sole of sandals was the same shape for everyone-men, women and children. Then, in the first quarter of the second century, various male and female styles appeared. Women's sandals are getting narrower with a sharper toe, while the men's sandal is getting rougher and wider. In the third century, there was a strange increase in the toe of men's sandals, the soles of smaller sandals also had wide toes, indicating that children, probably boys, also wore sandals of this unusual style. This style did not gain further traction in the fourth century.

Van Driel-Murray suggests that this style probably shows the strength of a militaristic society and the privileged position of soldiers, the influence of militarism on civilian clothing in the provinces.

The soles of sandals are also of interest. On some soles, the initials of the master or his sign are stamped, while others are simply decorated on the inner sole.

Excavations in England into buildings at Billingsgate in 1974 and New Fresh Wharf (St Magnus ' House) in 1985 in London reveal the same interesting progression of sandal fashion as noted by Van Driel-Murray on the Continent. Sandals are often not just a type of shoe. Roman marble, bronze, or terracotta lamps were sometimes fashioned in the shape of sandaled feet. 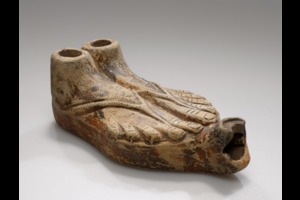 Sandals in the form of a pair of glass bottles exhibit in the Roman-German Museum in Cologne. This is a transparent glass with colored straps; when filled, they took on the color of the contents 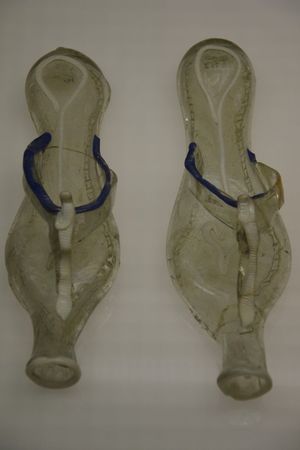 Inside, the sandals were worn by nobles and slaves. However, their quality varied. Lower-class people probably wore sandals outdoors as well.

Literary evidence suggests that only high-status citizens were allowed to wear a special type of closed Roman shoe called Calcei Patricii or senatorii. Such restrictions probably did not apply to simple calcaea in the northern provinces, where the climate was much harsher. Archaeological finds also indicate the presence of closed shoes for citizens and non-citizens.

The sandals were removed when the wearer was reclining on the wedge at the banquet. Asking for sandals (poscere soleas) was considered an announcement to the host of the banquet about the intention to leave. 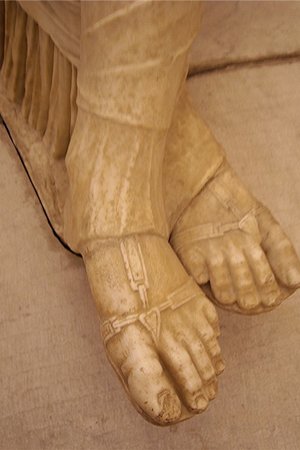 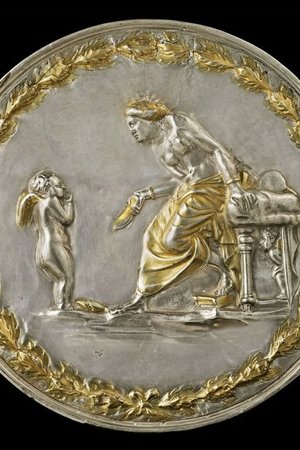 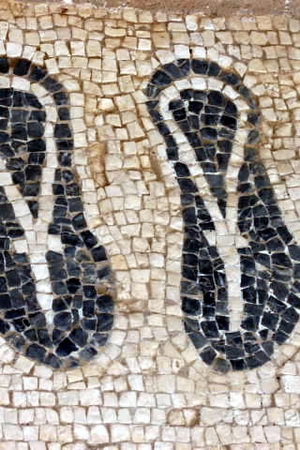 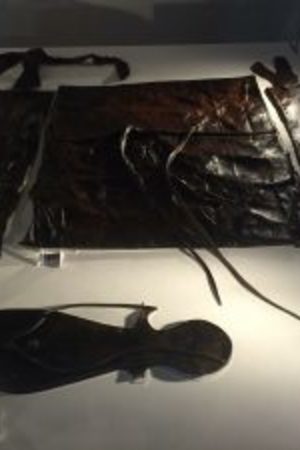 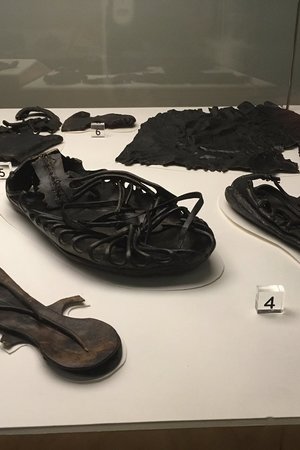 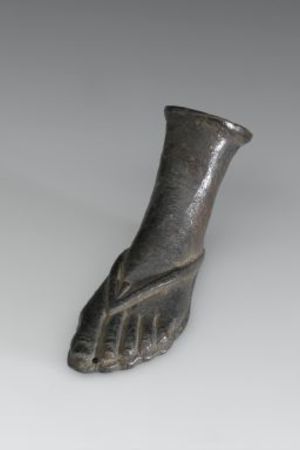 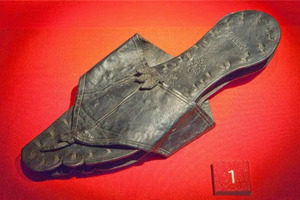 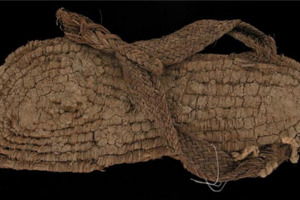 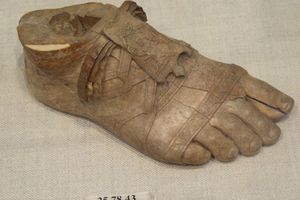 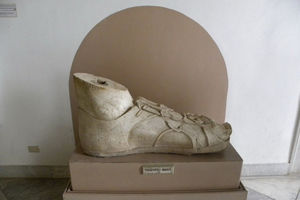 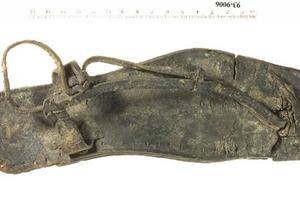 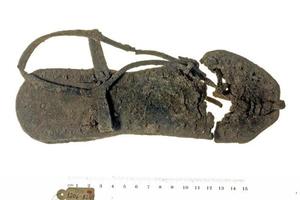 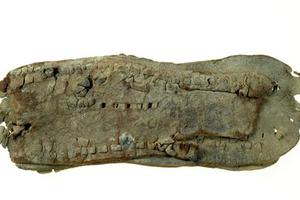 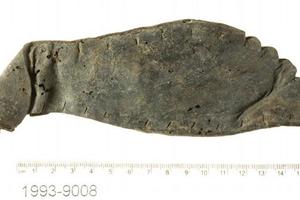 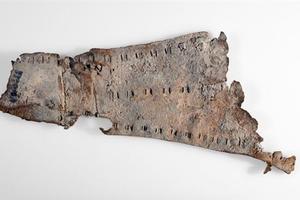 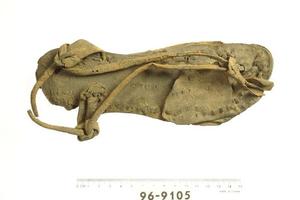 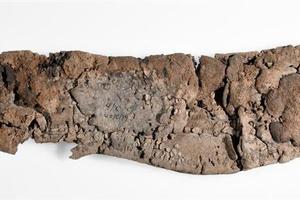 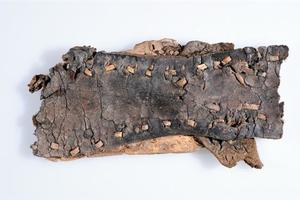 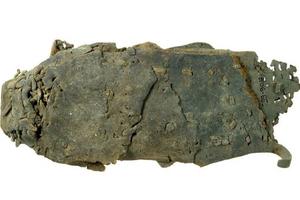 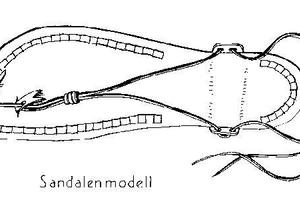 A sketch of a sandal found in Judea dates back to the 1st century AD.