The helmet of a Celtic warrior was an essential attribute. They have changed quite a lot over time, forming many subtypes. The simplest ones, like Montefortino, are found in great numbers, they are made mainly of bronze, but there are also finds of iron. Also among the finds are richly decorated helmets that were used either by the nobility, or, judging by their good condition and not optimized for combat design, were used for ritual purposes.

The Celts were one of the most technologically advanced civilizations in antiquity, and many innovations, including in military equipment, were borrowed by other peoples. This also affected helmets - over time, the Romans adopted them for armament, somewhat modifying them to suit their needs and traditions.

Most of the Celtic shields were oval in shape, although images and archaeological finds show rectangular, hexagonal or round specimens. The same images indicate that the shields were decorated with various symbols, animal drawings or geometric ornaments. 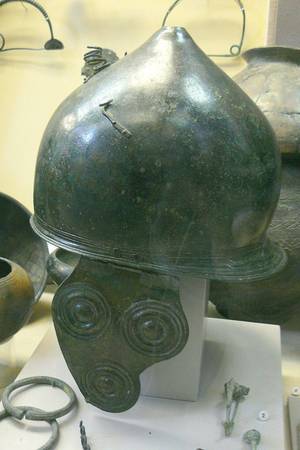 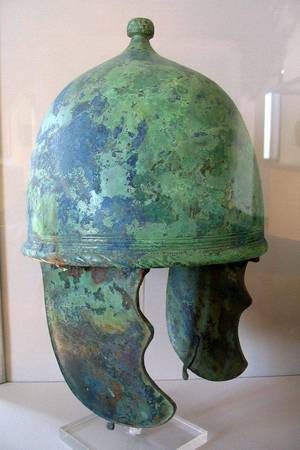 Montefortino helmet. Museum of National Archeology in Perugia. Italy. 350-300 BC 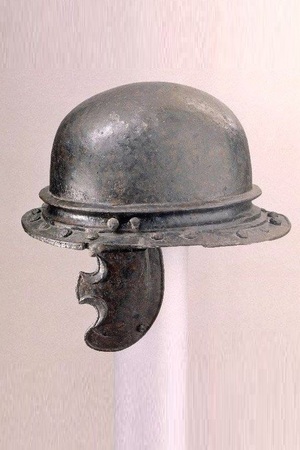 Many helmets are found in the area of Italy that was inhabited by the Senones (part of the Atlantic coast between Ancona and Rimini). All of them have a visor in the back, which was intended to protect the neck. Helmets of this type are usually called montefortinskimi-from the burial site where they were first discovered. You can easily trace the connection of this type of helmet with those used in France and Austria in the V century BC (1, 2). They were made of bronze and were stretched up. Probably, in Italy, this type of helmet appeared together with the senons.

There it turned into a Montefortine-type helmet, retaining the back of the head and a rather long top, although the helmet itself acquired a much more rounded shape. Images 5, 6 and 7 represent helmets found in Senonian burials and date back to before 282 BC, the time when this Celtic tribe was finally driven out by the Romans. They are usually attributed to the end of the IV-beginning of the III century. The helmets recovered from Senonian burials are usually made entirely of iron or iron and bronze, and only rarely are they made entirely of bronze. Some of them have a complex composite comb mount, which is made from an iron holder fixed to the top of the helmet.

Probably, on both sides of such a helmet there were ornaments made of feathers, and on the top of the head there was a horsehair comb. The cheek pads of this type are almost always "three-disc" shaped (6) and may have been adopted from the Italians. Their style is so reminiscent of Samnite breastplates that it is difficult to doubt the origin. In the third century BC, the shape of these cheek pads was simplified, they became triangular, with three "cones". The Italians quickly adopted the Montefortine type helmet. The specimen found in Bologna has an Etruscan inscription, which makes it possible to date it to the time before the Etruscans left the Po Valley in the middle of the IV century BC. e. Such helmets are also found on reliefs from the grave of the IV century in Cerveteri. The cheek pads on both helmets have a pronounced prong. A "three-disc" type was also found in Etruria, but it seems to have existed no longer than the IV century BC. One instance of a helmet with "jagged" cheek pads was found in the Montefortino necropolis, but it is most likely imported [9]. 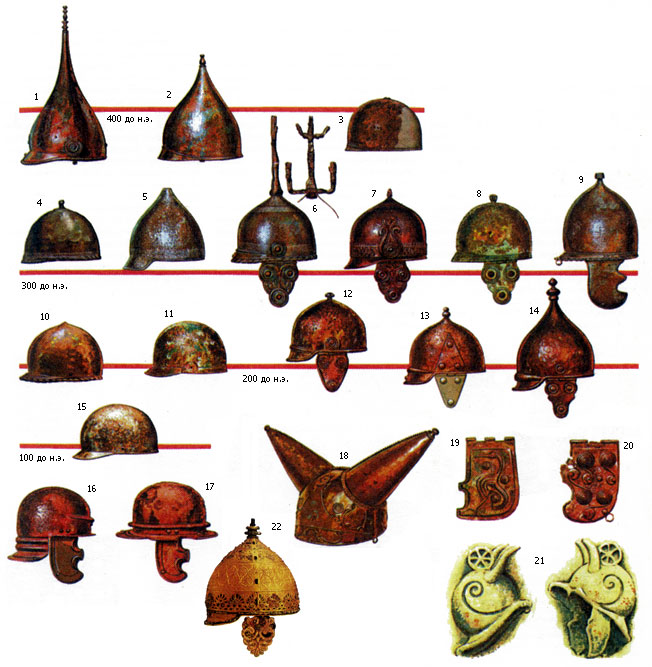 1-bronze Celtic conical helmet from Apulia. The helmet decorations are Celtic, but the general style is Apulian. In Italy, several helmets were found with horn-like details carved from thin sheet bronze. Bari Museum. 2-horn from the same helmet. The British Museum. 3-a coin from France, which depicts a Celt with his hair soaked in lime. 4 - Celtic negau helmet from the Alps. It is almost identical to the Early Italian type, with the exception of a ridge-like transverse protrusion. 4a — the inner part of the lower edge, which shows how the balaclava was fixed. 5, 6 — front and rear view of the statue of a warrior from Gresan, near Nimes in southern France. This statue, which can be dated to the 4th century BC, is pre — Celtic. The warrior is wearing either front and back breast plates secured with straps, or a carapace with decorative elements in the form of these plates. Nimsky Museum. 7-detail of a belt buckle from Fig. 5. 8-a belt buckle of the same type as that of the warrior from Gresan, found in Aleria, Corsica. 9, 10 — two hooded heads from Saint-Anastasy, France. Nimsky Museum. 11-sculptural image of chain mail with a shoulder cape from Entremont, in the south of France. This is a traditional Celtic type. 12-buckle from the same image. 13 — part of Celtic chain mail with a clasp that held the cape. From Kiumesti in Romania. Scale 1: 2. A, B, C — three types of rings used in Kiumesht chain mail, the original size. D — cross section of the clasp. 14-statue of a late Celtic warrior from Vacher in southern France. He is clad in Italian-style chain mail. 15-statuette of a Celt from northern Italy wearing an Italian-style chain mail. 16-sculptural image of chain mail from Pergamon, Turkey.

The Montefortine type of helmet became widespread throughout the Celtic world: the number 13 was discovered in Yugoslavia, and its almost complete Galatian counterpart is depicted on the victory frieze in Pergamum. Although the Celts were almost completely driven out of Italy by the first quarter of the second century BC, the Montefortine type still existed in the valleys of the Alps. The samples found there (12, 14) are made exclusively of iron and have a separate head guard, which was then riveted to the helmet. Cheek pads have finally moved away from the original version, but they still remain the main characteristic feature of this type (14).

The Montefortine type was the most successful of all the existing helmet designs and was used in the Roman army for almost four centuries, without undergoing significant changes. According to the most conservative estimates, there must have been about three or four million such helmets made.

There was a second type of helmet, very close to the Montefortine one, but without a "bump" on the top of the head (10, 11, 15). It is commonly referred to as the "culus" type, after the first first-century specimen found in France. Although it did not enjoy the same success as the Montefortin helmet, it became quite widespread in the first century BC and may have become the predecessor of the helmet of the Roman legionaries of the first century AD. The origin of the culus type may be as ancient as that of the Montefortin helmet — one of these helmets was found in a Senonian burial site, and the Hallstatt copy can be dated to 400 BC.

Some helmets have some sort of wing-shaped decoration on the sides (7, 13). It seems that this type appeared in Italy, most likely under the influence of wings from Samnite helmets. Such helmets were popular in the Balkans in the III-II centuries BC; there are also images of them on the victory frieze from Pergamon, in Asia Minor. One specimen was found in Amphreville, northern France, but it may have come from somewhere else.

The arch from Orange (21) shows horned helmets that make you remember the story of Diodorus. Again referring to the relief from Bormio, we can make an assumption that these could be the standard bearers ' helmets. In Italy, several specimens were found with horn-like parts cut out of thin sheet bronze. An absolutely amazing example of a horned ceremonial helmet was found in the Thames near Waterloo Bridge (18). Very rare are helmets decorated with animal figures, such as those described by Diodorus. In fact, we only know of one instance. It was discovered in Kiumesti, Romania. This is a Batin type helmet (13), with the image of a bird on the top. The bird's outstretched wings were made on hinges, so that they must have flapped as the helmet's owner charged into battle.

Etruscan negau-type helmets have been found in several Celtic burials in northern Italy. The fact that the Celts adopted this type is confirmed by the finds of several copies of Negau helmets of Celtic shape in the Central Alps.

Two new types of helmet appeared in the first century BC. They are related to each other and are usually combined into the Agenport type. The Agen type (17) resembles a bowler hat with a brim, and the port type, with the same "bowler hat", has a rather large slap on the back of the head, which was riveted to the helmet (16). Both helmets had a new type of face plate, one that was later adopted by the Romans. The Port type became a direct prototype of the imperial Gallic helmet of the first century AD. Examples of such helmets, entirely iron, were found in northern Yugoslavia, in the Central Alps, in Switzerland, in central and southwestern France. The places where they were discovered differ in one feature — they are located along the borders of the Roman possessions of the beginning of the first century BC.

Celtic-type cheek guards from Alesia in central France, dated to the first century BC (20), are a strange mixture of the classic Italian type with "knobby" decorations and the old "three-disc" type. Similar characteristics are also found in the cheek guards of an earlier time, from northern Yugoslavia (19). There are also known finds of conical helms of the Greco-Italian type with Celtic decorations. They all seem to come from Apulia, a region in southern Italy. Decorative elements in the form of wheels placed on the top of the helmet are almost identical to those depicted on the arch in Orange.

Even in northern Italy, where a considerable number of helmets are found, most Celts must have had no armor. Diodorus tells us that these warriors smeared their heads with lime and then combed their hair back so that it looked like a horse's mane. This type of hairstyle is depicted on several coins. The attempt to make the hair stand up like the fur of an enraged animal dates back to very ancient times. Perhaps this is how the horsehair crest on helmets came about. 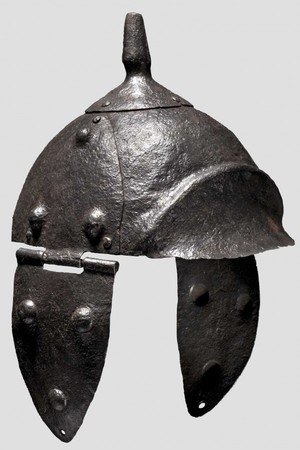 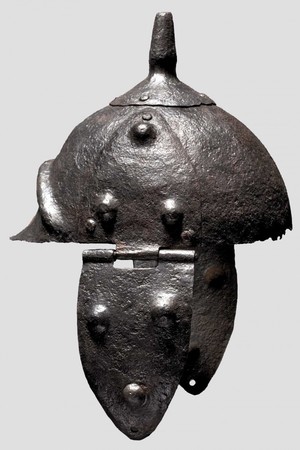 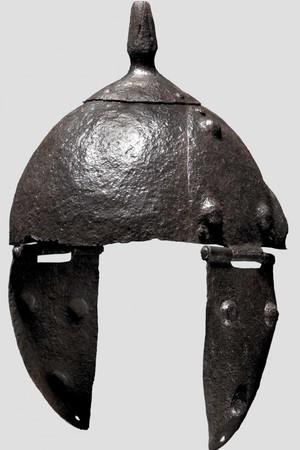 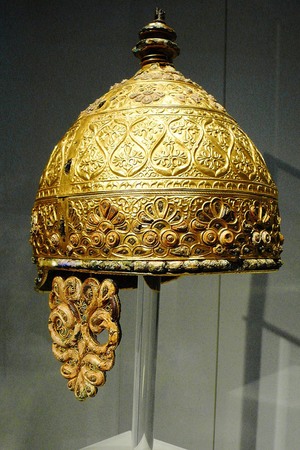 East Celtic helmet. Found in the Sava River. 2-1 century BC 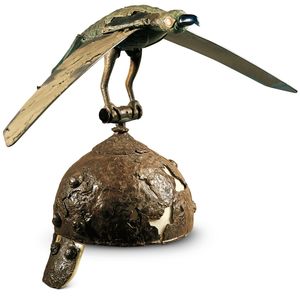 Celtic helmet. From a burial in Ciumesti, Romania. 3rd century BC