Chiton (Greek: одеждаιτών, "clothing") — the lower clothing of the ancient Greeks. The chiton had no sleeves and usually consisted of a rectangular piece of wool or linen fabric (in the classical era, chiton with sleeves were worn only by actors).

In the Bible (in its Greek translation of the Septuagint, as well as in a number of other translations into European languages), the word "chiton "is translated from the Hebrew word" kutonet " (Exodus 28:40), which refers to the type of male and female shirt among Jews; the chiton (kutonet) is included in the prescribed clothing for priests and Levites (Exodus 28: 40). Such a shirt with sleeves to the wrists was worn on the naked body.

In Rome, there was an analog of the chiton, which was worn in the same way- the tunic. 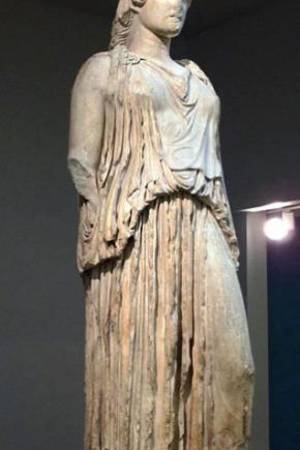 A caryatid from the Erechtheion. London, British Museum. 421-407 BC 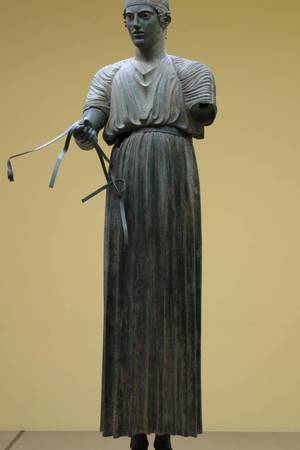 The charioteer. Part of a bronze sculptural composition – dedications of Sicilian tyrants to Delphi. Delphi, Archaeological Museum. Around 470 BC.

A man's chiton was made from a rectangular piece of cloth (about 1 meter wide and about 1.8 meters long), which was folded in half and chipped on the shoulders with fibulas or simply sewn. For greater freedom of movement during exercise, the buckle on the right shoulder was removed. The bottom of the chiton was necessarily hemmed (an unstitched bottom was a sign of mourning or slavery). The chiton was always belted, and usually with an affectation. Its length depended on the age and social status of the person. Most often, it reached up to the knees, but priests and officials in the performance of duties, as well as tragic actors during performances, wore long (up to the ankles) tunics. Warriors, on the contrary, usually shortened their tunics to the hips. While working, they wore a special kind of chiton — exomis, which was a piece of coarse linen passed under the right arm, also belted and fastened on the left shoulder.

In women, the chiton was no different in design from the male one, but a much larger number of ways of wearing it and belting it are known. Often the belt emphasized not only the waist, but also the chest. Women's tunics were usually longer and wider than men's, which allowed for a wide variety of draperies. 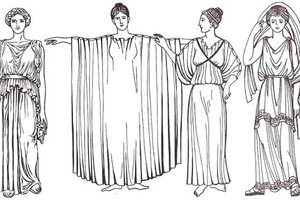 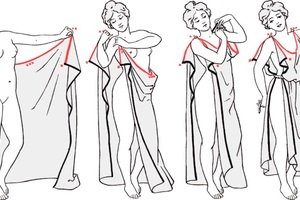 Exomis, exomida (other Greek :ωωμίς, from exo-outside, omos-shoulder) - in Ancient Greece, a piece of coarse cloth (skin, hide) fixed on the left shoulder, measuring approximately 2.3 by 1.40 meters. It can be called a subspecies of the chiton. The exomis was fastened at the waist with a belt, and on the left shoulder with a tie, belt, fibula or agraph. The size and texture of the fabric reflected the status of the owner: a coarse fabric without folds with an uneven or frayed hem was the sign of a slave, a larger fabric with simple folds — a free man, a warrior. A cloak or animal skin could be worn on top. A short exomis (above the knees) was sometimes used as a loincloth. 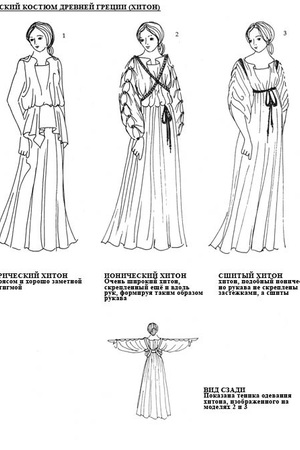