Kaussia (other Greek: καυσία) is a characteristic headdress of the peoples of the north of the Balkan peninsula. It existed in two types, similar in quality, but different in design and appearance.

The other looks a little like a Georgian cap-an airfield, only the "airfield" is not flat but slightly conical.

By the way, in the documentary photos of the 20th century, these caps look even more like kaushii than in the movie "Mimino", where they are sometimes even conical. On the Internet, you can read fascinating stories about the origin of Georgian caps from the Sicilian "coppola sicilian", which came to the Caucasus with the troupe of the Italian theater, but I can't judge how true this is. But the similarity with the" Afghan women " is really almost one hundred percent, except that now they are often made of fairly dense cloth. We are suitable for options made from simple non-rolled wool, there are also such options.

There are different opinions about who borrowed Kaussia from whom – Afghans from Macedonians or vice versa, but I think we can speak quite confidently about the Macedonian origin. The Kaussii are depicted in a fresco from the tomb of Philip II, who was buried, as is known, before the start of the campaign.

There are also kaushias of the "Afghan" model on frescoes from the Thracian tomb. On the reliefs of Persepolis, where the peoples subject to the king of kings are depicted, among which there should be Bactrians and Sogdians, no one wears such headdresses. During Alexander's campaign, it was in the territory of modern Afghanistan that many Macedonians settled, who, on the one hand, could not continue the campaign due to wounds and fatigue, and on the other, had to become the support of the empire in this troubled place.

In Hellenistic times, some frescoes, statues and coins of the Greco-Bactrian kingdom are well known for another version of Kaussia, which can be called "Bactrian", since it is repeated with enviable regularity on the coins of the Greco-Bactrian kingdom. Moreover, it depicts tsars, as before-Alexander in his lion helmet, which says, at least, about the prestige of such a headdress. 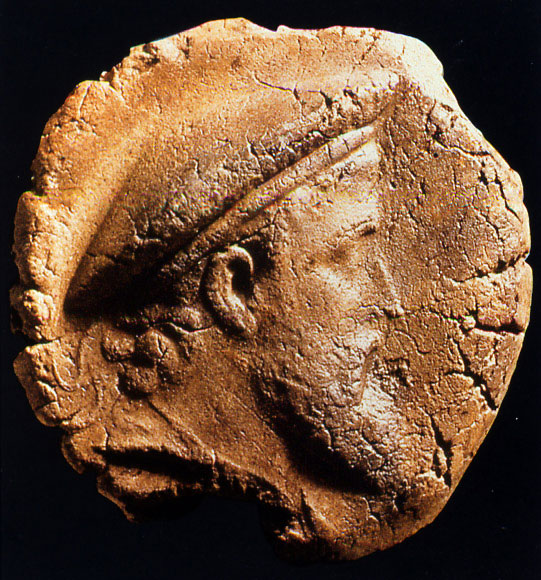 Coin with Demetrius II Seleucid in Kaussia. 2nd century BC

There are, at least in early Hellenism, images of the "Afghan" model.

In all but two of the images I know of, the caussias are white, beige, or cream – that is, white, since there was no perfect snow-white color in the fabrics of that time, and all these faint shades were most likely considered white. In one of the Pompeian frescoes, caucia is blue and gold, and in another (from a villa near Pompeii) it is pale purple. The last fresco is believed to have been created in the 60s BC, but art historians believe that it is copied from a Macedonian fresco of the third century BC (the appearance of Kaussia on it, indeed, is transmitted quite well). There are versions that it depicts the diadocha of Antigonus or even Macedonia itself in an allegorical form. This, of course, explains the color of the caussia, but there is no exact evidence. It can also be assumed that the Romans, copying from the Greeks, simply invented everything.

Now about the design and tailoring experience. The "Afghan" version is a cylinder without a single lid. A rectangular piece is sewn to a round piece of fabric around the perimeter, which is then rolled up into a roller. It is better to make it more authentic, otherwise the roller will unfold all the time. Then the causia is turned out and small (0.5 cm each) folds are sewn, which disappear in the upper part of the lid. The folds look outward. Due to the number of folds, the causia is adjusted to the size of the head. It is better not to make too many of them, otherwise it will be bulging in the upper part. To make a round piece of fabric more rigid, you can sew another layer of the same fabric or linen from the inside. Without this, the dome of the kausia will bend strongly in the shape of the head. In principle, it was not as flat as that of modern Pashtun women, because they were not made of cloth, but I am afraid that without a second layer it will outline the top of the head too much. The Afghan version is sewn simply, but because of the folds, it is not as fast as the "Bactrian"one.

In the "Bactrian" version, the dome is not flat, but conical. To do this, cut out a sector from a round piece and sew it along the cutout. For density, the same piece of linen is sewn to it. A wide disk is sewn to the circumference of the cone, with an outer diameter like that of a conical upper piece, and an inner one around the perimeter of the head. A rectangular piece of small width folded in half is sewn to the inside of the disk around the entire perimeter. Sometimes a ribbon with long ends falling back was passed through it, which is visible in many images. It allowed you to tighten and better fix the caussia if it was too big, but mine just fit.

From the point of view of practical qualities, caussia is very interesting. It, unfortunately, does not give such a chic shade as the Greek hat "pylos" (πῖλος), although it covers your eyes from the sun a little 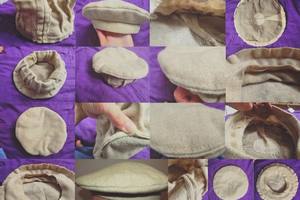 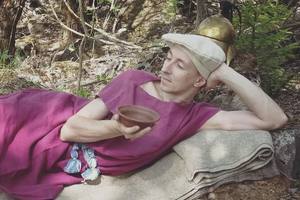