Marcus Aemilius Lepidus (c. 89-13/12 BC) was a member of the noble Patrician family of the Aemilii, considered by ancient authors to be one of the oldest families in Rome. From this family came many consuls and other statesmen of ancient Rome.

His father, Marcus Aemilius Lepidus the elder, was consul 79-78 BC and an associate Sulla. After the death of Sulla in 78 BC, Lepidus the Elder tried to revise his laws, which caused him to have a conflict with the Senate and he went to a revolt in Etruria, which was suppressed, and Lepidus the Elder himself was forced to flee to Sardinia, where he soon died in 77 BC.

In addition to Lepidus the younger, he had two other sons: Lucius Aemilius Lepidus Paulus and Lucius Cornelius Scipio Asiaticus Aemilianus (he was adopted by the consul of 83 BC Lucius Cornelius Scipio Asiaticus). About the older brother of Mark Emilia Lepidus Jr., just below we will tell you more. The middle brother, Lucius Aemilius Lepidus Paulus, was able to rise to the rank of consul in 50 BC. e. At first, he had a negative attitude towards Caesar, but after receiving a large bribe from him, he took a neutral attitude towards him. When Caesar was assassinated, Lepidus Paulus supported Caesar's murderers, so that he was even included in the proscription lists, but with the help of connections, not least the help of his older brother, who was then one of the three triumvirs of the 2nd triumvirate, he was able to avoid death and escape. He lived out the rest of his life in one of the eastern provinces of the Roman Republic. The younger brother, Lucius Cornelius Scipio, adopted by Scipio Asiaticus, rose to the rank of legate, but supported the rebellion of his biological father Lepidus the Elder in 77 BC. e. died during its suppression.

Let's go back to the eldest of the 3 brothers, Marcus Aemilius Lepidus Jr.

The first mention, in extant sources, of Marcus Lepidus the younger dates back to 64 BC. e., where he was among the members of the College of pontiffs (high priests in Ancient Rome), mentioned among the guests at a dinner party in honor of the inauguration of the priest of the god Mars, a certain Lucius Cornelius Lentulus Niger. By the way one of the guests at the same dinner was and Gaius Julius Caesar.

In 61 BC, he held the position of monetary-responsible for the production of coins.

In January 52 BC, he took up the position of interrex to organize the consular elections. Lepidus did not call a comitia for fear that the supporters of the recently deceased Clodius would win, which incurred the wrath of the crowd, and his house was looted.

After that, Lepidus consistently began to climb the Cursus honorum. He held the positions of Quaestor and curual Aedile. The date of Lepidus ' questura is not known, but the aedilyte is attributed to 53 BC.

In 49 BC, Marcus Lepidus was praetor and supported Gaius Julius Caesar in the ensuing Civil War between him and Pompey. For this, Caesar awarded him the title of proconsul of Near Spain in 48 BC. e. Here, almost without shedding blood, he was able to extinguish a revolt against the proconsul of Far Spain - Cassius Longinus (one of Caesar's associates), for which he was granted the title of emperor and a triumph on his return to Rome, in the autumn of 47 BC. e.

In 46 BC, Lepidus became consul with Caesar, and later, until Caesar's death, he remained commander of the cavalry, and at one time was even one of the highest magistrates of Rome when Caesar was fighting in Africa.

Some historians believe that such honors were bestowed by Caesar on Lepidus, as he considered him his successor instead Mark Antony, but then Lepidus was appointed to 44 BC. He was governor of Narbonne Gaul and Near Spain, losing the “title of second man in the state”, but Lepidus sent "trusted" persons to manage the province, and he remained in Rome, retaining the post of commander of the cavalry. After the assassination of Caesar on March 15, 44 BC, Lepidus was the first to restore order in the city by introducing troops and calling for revenge for Caesar, he teamed up with Mark Antony, who, like Lepidus, secretly dreamed of taking Caesar's place. But in the subsequent political intrigues, Lepidus lost and left for his provinces, but as a reward for restoring order in the capital, after the assassination of Caesar, he was granted the title, which became vacant with the death of Gaius Julius Caesar, the Great Pontiff (high priest, head of the college of pontiffs, the highest priestly position in Ancient Rome, was for life).

In Spain, he encountered the son of Pompey the Great, Sextus Pompey, who began recruiting troops for his father, a valuable negotiation with him, and Lepidus managed to get Sextus to leave the Iberian Peninsula and settle in Sicily. This all happened in March 44-January 43 BC.

In 43 BC, Lepidus waited at first, in the outbreak of a war between By the Senate and Octavian on the one hand, and Mark Antony on the other. Then he formed a partnership with Mark Antony.

Later, instead of fighting against Lepidus and Antony, Octavian unexpectedly joined them, so after a personal meeting of all three in November 43 BC in Bononia (now the city of Bologna, in Northern Italy), where Lepidus mediated between Antony and Octavian, a second triumvirate was formed , sealed by a treaty. Under this treaty, the triumvirate was created in order to take power over the Republic in their own hands and punish the murderers of Caesar. So far, only the western provinces were divided, since the eastern ones were still in the hands of Caesar's assassins, Lepidus received Near Spain, Narbonne Gaul and Far Spain. The second triumvirate was legalized by the law of Titus on November 27, 43 BC, 3 days after the triumvirs entered Rome. According to it, the triumvirs received exclusive powers for 5 years, including the right to appoint higher magistrates.

Then the terror began in Rome – the second, after Sulla, proscription lists. One of the victims of this list was Marcus Tullius Cicero. By the way, the middle brother of Lepidus, Lucius Lepidus Paulus, was also included in these lists, but with the secret help of his older brother Marcus Lepidus the Younger, he was able to escape and escape from Italy. After executing and replenishing his and other triumvir's finances, Lepidus celebrated his Spanish triumph for "defeating" Sextus Pompey in December 43 BC, and in the new year 42 BC he became consul for the second time. This was the apogee of his power, as Antony and Octavian went to fight Caesar's assassins in the east, and Lepidus with a small part of the troops remained in Rome, becoming its sole ruler.

But after that, the slow decline of his power began. Antony and Octavian successfully destroyed Caesar's assassins and soon divided power and new provinces between them, ignoring Lepidus. Plus, Lepidus didn't have a large military force, and he left most of his legions to Antony and Octavian to fight Caesar's assassins in the East. The people and senators of Rome hated him, as they considered him the main organizer of the executions (proscriptions) that occurred during the triumvirs. In addition, after the new division of the provinces between Antony and Octavian, Lepidus lost Spain, it went to Octavian and Narbonne Gaul, it went to Mark Antony. Because of rumors about the alleged connection of Lepidus with Sextus Pompey, who settled in Sicily, his associates also deprived him of the last military forces under his command – the 3 legions, although they promised to transfer Africa to his administration if the rumors about his connections with Sextus turned out to be false. 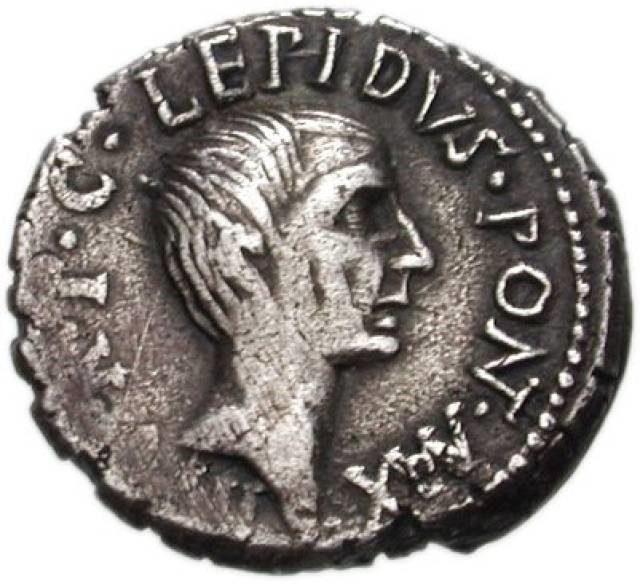 Roman denarius with a portrait of Marcus Aemilius Lepidus

Later, despite his unsuccessful performance on the side of Octavian in the Perusian War (the revolt of Mark Antony's brother, Lucius Antony, against Octavian's arbitrariness in Italy in the fall of 41-spring of 40 BC). Octavian suppressed him), but he still received from Octavian Africa with six legions to manage. Lepidus left for Africa, and there, for four years (40-36 BC), while the triumvirs Mark Antony and Octavian prepared for war with each other, each planning to lure Lepidus to his side, Lepidus began to recruit and train troops. Along the way, he also annexed to Africa the territory of the former Numidian Kingdom (the province of New Africa), which was under the jurisdiction of Octavian, but was actually controlled by Mark Antony. During this time, Lepidus was able to increase his army from 6 to 12 legions. He assisted Octavian in the war with Sextus Pompeius in Sicily in 36 BC. Octavian was represented in that war by his general Marcus Agrippa. In Sicily, he and Agrippa successfully defeated the fleet of Sextus Pompey and trapped his land forces in the city of Messana (now Gordo Messina in Sicily). Here, bypassing Agrippa, he persuaded the remaining troops of Sextus to surrender to him and added them, despite Agrippa's protests, to his army, bringing its strength to 22 legions.

Having gained such a force approximately equal to the forces of Octavian, he demanded that he restore his powers as a triumvir. Octavian himself arrived in Sicily to negotiate with Lepidus. Then he was able to see that Lepidus did not have the support and influence in his troops and began to agitate them in his favor. As a result, all the soldiers of Lepidus went over to the side of Octavian, and Lepidus, having lost his troops, began to ask Octavian for mercy. Octavian sent him to Rome. So ahead of him was the war with Mark Antony. There Lepidus awaited his fate, as Octavian was advised to execute Lepidus and deprive him of the dignity of grand pontiff, but Octavian showed mercy to Lepidus because he saw that after the events in Sicily, Marcus Aemilius Lepidus the younger was not dangerous to him. Octavian actually removed Lepidus from the Senate, but retaining his property and the post of grand pontiff, sent him under supervision to live out his days in his villa near Circe (an ancient city in Italy).

The historian Appian described the fall of Lepidus as follows: “Thus this man, who was often a general and a triumvir, who appointed officers, who entered senators of equal rank on the lists of those sentenced to death, lived as a private person, even being lower than some of those included in the proscription lists, and now occupied a high position.” Appian of Alexandria. Roman History, XVII, 126.

After the death of Lepidus in late 13-early 12 BC, the office of Grand Pontiff passed to Octavian Augustus.

Marcus Aemilius Lepidus the younger was married twice. He had children only from his second marriage-two sons. The eldest of his sons, Marcus, was executed in 30 BC for conspiring against Octavian Augustus, but the younger Quintus lived a long life without involving himself in politics. The son of Quintus and grandson of Lepidus the younger, Manius became consul in 11 AD and father-in-law of the future Roman emperor Galba in 68.

2. Egorov A. Rome on the edge of epochs. Problemy rozhdeniya i formirovaniya principata [Problems of birth and formation of the principate], LSU Publishing House, 1985, 222 p.