Onager (Latin onagres) — an ancient Roman torsion-type throwing machine, literally translated as donkey (onager is an ungulate animal of the horse genus, a subspecies of the kulan). Onager is often incorrectly referred to as a catapult.

Onager is a simplified version of a single-shoulder ballista for throwing rocks. The throwing arm is actuated by a torsion bar made of twisted animal veins or hair. At the other end of the lever, a sling is attached, which increases the initial velocity of the core. The first mention of onager appears from the 4th century AD, but archaeological finds of individual metal parts allow us to attribute its appearance to the 3rd century. Description of the design of the car was given by the late Roman officer and historian Ammianus Marcellinus (IV century AD).:

"The scorpion, which is currently called onager, has this shape. Two logs are cut out of ordinary or stone oak and slightly rounded, so that they rise up on a hump; then they are fastened together like sawhorses and large holes are drilled on both sides. Strong ropes are passed through them, which give a clip to the car so that it does not disperse. In the middle of these ropes, a wooden pole like a drawbar rises obliquely. The ropes attached to it hold it so that it can climb up and down. Iron hooks are attached to its top, on which a hemp or iron sling is hung. Under this wooden structure, a thick bed is arranged, a pallet stuffed with crumbled straw, well reinforced and placed on a pile of turf or on a platform built of bricks. If this machine is placed directly on a stone wall, it will shake everything that is under it, not because of its weight, but because of a strong concussion. When it comes to combat, a round stone is placed in the sling, and four people on either side of the machine quickly rotate the navoi to which the ropes are attached and bend the rod back, bringing it almost to a horizontal position. The gun commander standing at the top of the car then knocks out the key that holds all the connections of the car with a strong blow of an iron hammer. Released by a quick push, the rod bends forward and, meeting a rebuff in the elastic mattress, throws out a stone that can crush anything that gets in its way.

This machine is called the tormentum, because the tension is obtained by twisting (torquere), the scorpion, because it has a sting sticking up; modern times have also given it the name onagra, because wild donkeys, when pursued on the hunt, kick back and throw stones so that they pierce the chest of their pursuers or, having pierced the bones of the skull, smash the head.". 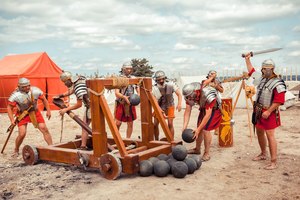 Based on the method of throwing with a sling, we can conclude that the trajectory of the projectile was rather flat than mounted. Onagers were used in the defense of fortresses or perhaps as an analogue of direct fire guns in field combat, but when besieging fortresses, ballistae were already required, firing from a high elevation angle. A contemporary of Marcellinus, the ancient Roman author Vegetius, noted that the onagers were in the regular armament of the legion in the amount of 10 pieces, and bulls were required for their transportation.

It is known that both stones and molotov cocktails were thrown from onagers.

The tactical use of onagers (or scorpions) was described by Marcellinus, describing the defense of the eastern fortress of Amida by the Romans from the Persians in 359:

"We decided to put scorpions against those four ballistas [installed on the siege towers]. Having moved them from another place, we set about installing them with all the care that requires great skill [...] From the iron slings of scorpions from the battlements of the wall, round stones flew at the enemy's towers. They broke the fastenings of the towers, and the ballistae and their servants flew down, so that some died from the fall without even being wounded, others died under the debris that fell on them.".